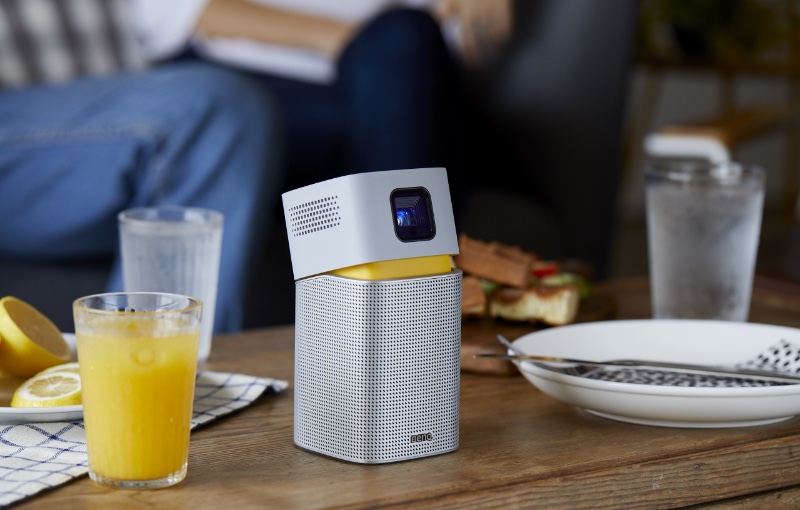 BenQ has launched another portable projector that adds to its product line and a rapidly growing market segment.

The company says that the BenQ GV1 is aimed at customers who want to “cut the cord and enjoy big-picture entertainment in any setting”.

Thus, the GV1 looks more like a portable smart speaker or mesh router than a projector. Standing 15cm tall and weighing only 708g, the projection lens mounted in the top that has a convenient adjustment hinge that allows 15˚ of tilt so that the projected image is at a comfortable height.

It can project an image up to 100-inches. Although the DLP 3430-based projector only has a resolution of 480p and a brightness of 200 lumens, it does support playback up to Full HD.

As this is meant to be for cord-cutters, connectivity is of prime importance. The GV1 streams movies, videos, and music via Wi-Fi, Bluetooth, or USB-C and HDMI. The GV1 has a single USB C port, so if users want to connect to HDMI, they’ll need to use an adaptor first.

There is a built-in 5W speaker so that the GV1 can double as a portable Bluetooth speaker at the touch of a button.

Battery life is a claimed three hours so that should be enough for most movies. If rewatch The Lord of the Rings often, you might want to look elsewhere.

The BenQ GV1 is on sale now and is priced at S$649 on the Lazada and Shopee BenQ Stores.

Join HWZ's Telegram channel here and catch all the latest tech news!
Our articles may contain affiliate links. If you buy through these links, we may earn a small commission.
Previous Story
iOS 14.3 is now available and it includes a ton of updates including ProRAW for Pro iPhones
Next Story
Specs of LG's rollable phone and next flagship phone revealed