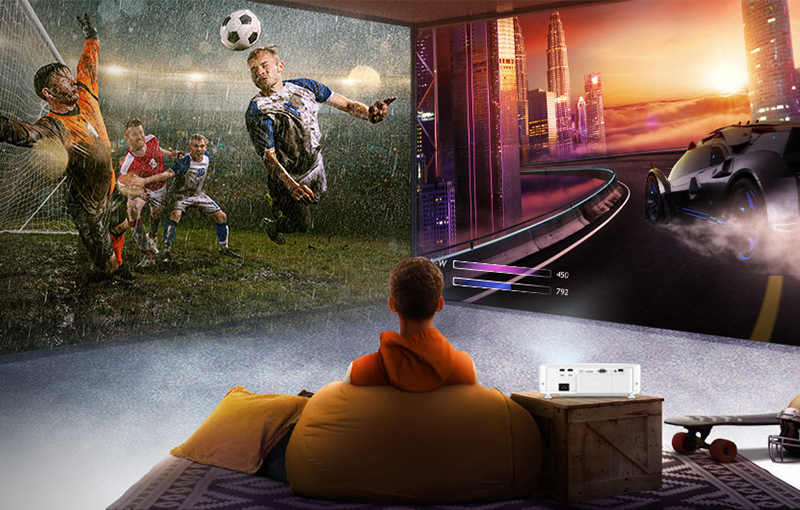 Contrary to what some people might think, you don’t always need a flashy, high-end TV to get the best home entertainment experiences.

Sometimes a solid projector can work just as well, or perhaps even better when you consider that you are effectively turning your entire wall into an interactive theatre. Fortunately, you will not have to trek through mountains of web pages to find solid options.

The two newest members to the BenQ arsenal are well-suited for such purposes; the TK850i Smart Home Projector specialises in bringing fast-paced broadcasts and videos to life - perfect for those who are keen to catch the upcoming Tokyo Olympics or simply relax with a Disney+ binge. Meanwhile, the TK700STi Low Input Lag Gaming Projector caters to your gaming needs by delivering ultra-immersive experiences that will put you right in the middle of the action.

No such thing as overkill

Still, before we delve into the specs, we probably need to address the elephant in the room. Why on earth would you consider using a projector instead of a monitor or TV screen?

Well, sometimes a little overkill works wonders, and to put it simply, have you ever wished you could enjoy your favourite games and shows on a big cinema screen? If the answer is yes, then a projector is the perfect option to add to your home entertainment setup.

Not only will you be able to play games or watch movies on a much larger “screen” than what a TV can provide, but you don’t even need to buy a projector screen per se. With either of BenQ’s projectors, you can simply plug-and-play and start projecting your games on any regular wall (hopefully it's a white wall), which makes it a much more versatile (and portable) choice as compared to conventional display options.

A regular TV is far bulkier and you can't 'move' around rooms if you want the flexibility on where you wish to enjoy your big screen entertainment for the night (or day). Also, full-featured TV screens beyond 65 inches are prohibitively expensive. Projectors don't scale in price for the display size they can project and 100 inches of fun is very much a minimum expectation.

For those who want to double down on mainstream entertainment media, then the BenQ TK850i Smart Home Projector is the recommended choice among the new duo of projectors. Granted, its true niche is in casting fast-paced sports matches such as basketball, soccer and even F1 racing, but rest assured that it will also deliver stellar performances for any form of 4K streaming entertainment.

Sporting DLP UHD projection system (utilising pixel-shifting technology to achieve 4K resolution) as well as BenQ’s proprietary HDR PRO technology with HDR10/HLG support, it is able to utilise its Dynamic Iris and HDR brightness features for enhanced tone mapping capabilities. These features essentially allow the TK850i to deliver unmatched contrast and 3,000 lumens of brightness alongside wonderfully precise and vivid colours, making it one of the more capable projectors in the market for streaming live sports broadcasts. You'll get to enjoy all this at a glorious 100 inches of projection from just 2.5 metres from the wall.

Next up, the TK850i also features a special mode that further enhances its best qualities. The projector’s dedicated Sports Mode greatly enhances realism and video quality, so aspects such as skin tones, natural blues and greens and even wood grains will receive a boost to satiate our senses.

Finally, the TK850i wraps up its package with Android TV 9.0, which gives you easy access to over 5000 apps on the Google Play Store. From your favourite content on platforms like Netflix and Disney+, to an endless variety of exciting games, all directly from the projector. You could also choose to cast all of these straight from your Android devices, or even your Chrome browser if you so prefer.

The projector also boasts dual 5W speakers built-in, so you don't really need to plug anything to it other than the power cord to get it going. How's that for true simplicity?

As its name suggests, the BenQ TK700STi is specially designed to handle video games, though you can certainly expect it to deliver quality streaming experiences as well. Combining BenQ’s extensive expertise in audiovisual delivery with powerful 4K capabilities and ultra-low latencies, the TK700STi is well-equipped to provide nothing but the ultimate visual experiences and immersion for gaming.

Like its TK850i cousin, this projector also features a spectacular 3000 ANSI lumens brightness rating and HDR capabilities but features a shorter throw distance requirement thanks to a lens that allows it to project 100 inches at just 1.99 meters from the wall. So you won’t need a lot of space to get the most out of it, which this projector was expressly designed for its intended use case. Bundle it up with a stylish, minimalist aesthetic that enhances stability, and you’ve got a highly versatile projector that will have no problems fitting into just about any gaming setup, be it in a compact hall or your own room.

But that’s only touching the surface of things. Just like the TK850i, the TK700STi has a few tricks up its sleeves – two of them, to be precise.

First up is the projector’s dedicated Game Mode, and gamers who enjoy adrenaline-pumping titles like The Last of Us Part 2 or the aforementioned Black Ops Cold War will certainly appreciate this feature. Users can freely switch between the trio of FPS, RPG and SPG sub-modes depending on what they want to play, with each of these providing significant visual boosts to different areas. So, whether you want to emphasise the finer details of an RPG overworld, highlight an awe-inspiring trick shot or intensify a fierce gunfight in the middle of a city, there’s something in the TK700STi’s repertoire for every occasion, and this immense versatility is topped off with a built-in 5W speaker should you want a wire-free and hassle-free gaming session.

Next up on the list is Fast Mode, which allows the TK700STi to minimise input lag, without any compromise on visual quality in exchange. In this mode, the projector boasts an ultra-fast minimum response time of 16.67ms on 4K at 60fps, allowing for seamless on-screen movement control. This makes it the perfect complement for fast-paced, reaction-centric games like FIFA and Dark Souls - there’s nothing quite like seeing your characters respond instantaneously to your button inputs. In fact, BenQ claims it's the world's first 4K projector of its kind.

Finally, it even comes with the same Android TV 9.0 operating system as the TK850i, providing fingertip access to all of your favourite programmes and apps.

Who says projectors can't match TV experiences? This duo can.

The BenQ TK700STi and TK850i projectors are priced at S$2,499 and S$2,799 respectively. If that seems a little out of your price range, fret not, the slightly older TK800M model at S$2,099 won our Best Home Entertainment Projector category for options about $2k.

For more information about the projectors, check out the official BenQ TK700STi and BenQ TK850i pages respectively. You can also find out more about the full range of BenQ's home entertainment projectors here.

Our articles may contain affiliate links. If you buy through these links, we may earn a small commission.
Previous Story
Satechi's new stand and hub is foldable and has 6 connectivity ports
Next Story
Wealthcare app Hugo launches in Singapore