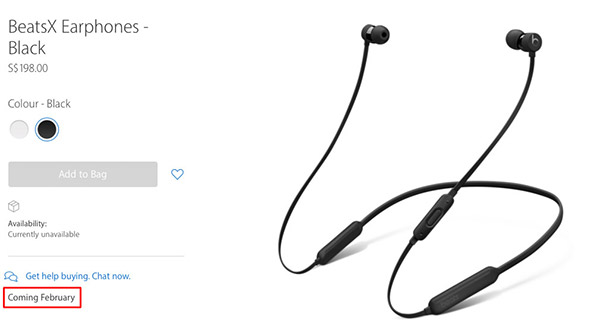 With the AirPods now available for order and shipping as early as next week (estimate’s now slipped to 2 weeks), the only announced Apple W1-equipped headphones to be still missing in action is the BeatsX. Originally slated for a fall release, the S$198 earphones are now listed as “coming February” on the online Apple Store.

Announced alongside the iPhone 7 and AirPods, the BeatsX is one of three W1 headphones from the Apple-owned Beats. The other two are the Solo 3 Wireless and Powerbeats 3 Wireless. The former sports an on-ear design and offers a super-long 40 hours of battery life; the latter a sport-oriented pair with earhooks and sports 12 hours of battery life. On the other hand, the BeatsX is rated at 8 hours and is the only one of the trio to charge via a Lightning cable (it’s supposedly the first headphones to be designed post-Apple’s Beats purchase). It's also the most compact of the three, with a Flex-Form cable that should hang comfortably around the neck. Regardless, since all of them have the W1 wireless chip, they offer quick setup with Apple devices, and once paired, easy switching from one device to another as long they’re signed in to the same iCloud account.

Expectedly, there’s no official word on why the BeatsX is delayed. Remember, the AirPods are supposed to ship in end October, and the BeatsX in fall (or late 2016) - a 2-month gap. Why is there this gap? Who knows? Maybe there isn’t enough W1 chips to go around, so the AirPods have first priority? And with the AirPods now shipping soon (and presumably, Apple’s resolved whatever design or manfacturing problems it’s faced to finally ramp up production), the BeatsX being pushed to February, while a bummer, isn’t exactly a surprise?

Join HWZ's Telegram channel here and catch all the latest tech news!
Our articles may contain affiliate links. If you buy through these links, we may earn a small commission.
Previous Story
The Google Drive app for iOS is now an Android migration tool
Next Story
Google will spin off its self-driving car business into a new company called Waymo