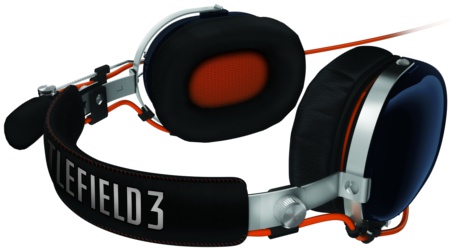 The latest addition to its Collector's Edition gaming peripheral lineup, the BlackShark comes with complete circumaural ear cups and a detachable boom microphone. Inspired by tactical aviator headsets, it incorporates Razer's sound-isolating technology to block out ambient noise so you can better concentrate on gaming.

With an exclusive BF3 design, it features 40mm neodymium magnets with copper-clad aluminum voice coil. Also, the leatherette sealant of the headset's ear cups blocks out unwanted noise, allowing gamers to focus on the battle audio and tactical radio chatter of the game.

The Razer BlackShark headset is priced at US$129.99 and will be available at Razerzone.com starting July 2012.