Batista is coming to Gears 5!

Batista is coming to Gears 5 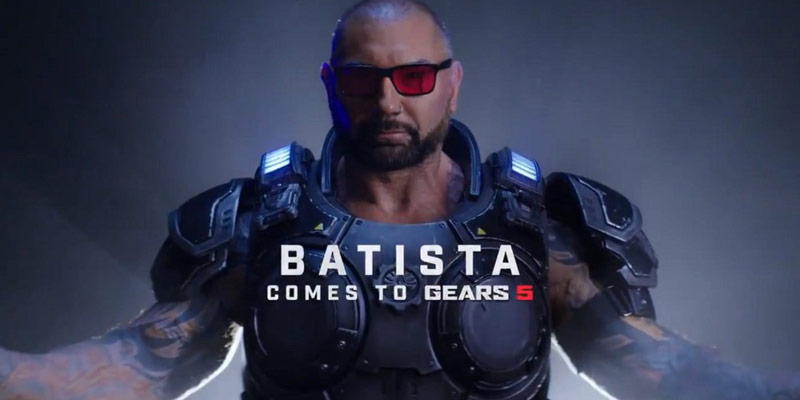 Wrestling and Guardians of the Galaxy fans are about to be very happy people. Gears 5 recently announced that Dave Bautista (also known as Batista) himself will be playable in the game. In a game full of massive, burly men, he’s a natural fit.

It’s about damn time. Play as me in #Gears5 starting Sept 15 after @WWE Clash of Champions. @XBox @GearsofWar #DreamChaser pic.twitter.com/bCU4ZIjdw1

Rod Fergusson, the Gears 5 game director, had this to say:

Adding Batista to Gears 5, we started with the fantasy of ‘Batista as Marcus,’ putting Batista into Marcus’ armor, and starting with Marcus’ script. Then we added elements of “The Animal” Batista into his voice performance and onto his look by adding his signature Hollywood shades to his character.  Batista was great in the booth and I can’t wait for Gears and Batista fans alike to stomp some Swarm as The Animal.

Bautista has described Marcus Fenix as his dream role in a Gears of War movie, so this move is kind of a sweet gesture. His appearance in the game is part of Xbox and WWE’s partnership leading up to WWE Network’s ‘Clash of Champions’ event on September 15.

If you want to play as the man himself, all you have to do is play any version of Gears 5 beginning from September 15. The promotion will end on October 28.

Previous Story
Razer wraps up esports bootcamp with talks of closer collaboration within the SEA region
Next Story
Here's when you'll be able to play Borderlands 3 in Singapore
Loading...
Featured Highlights