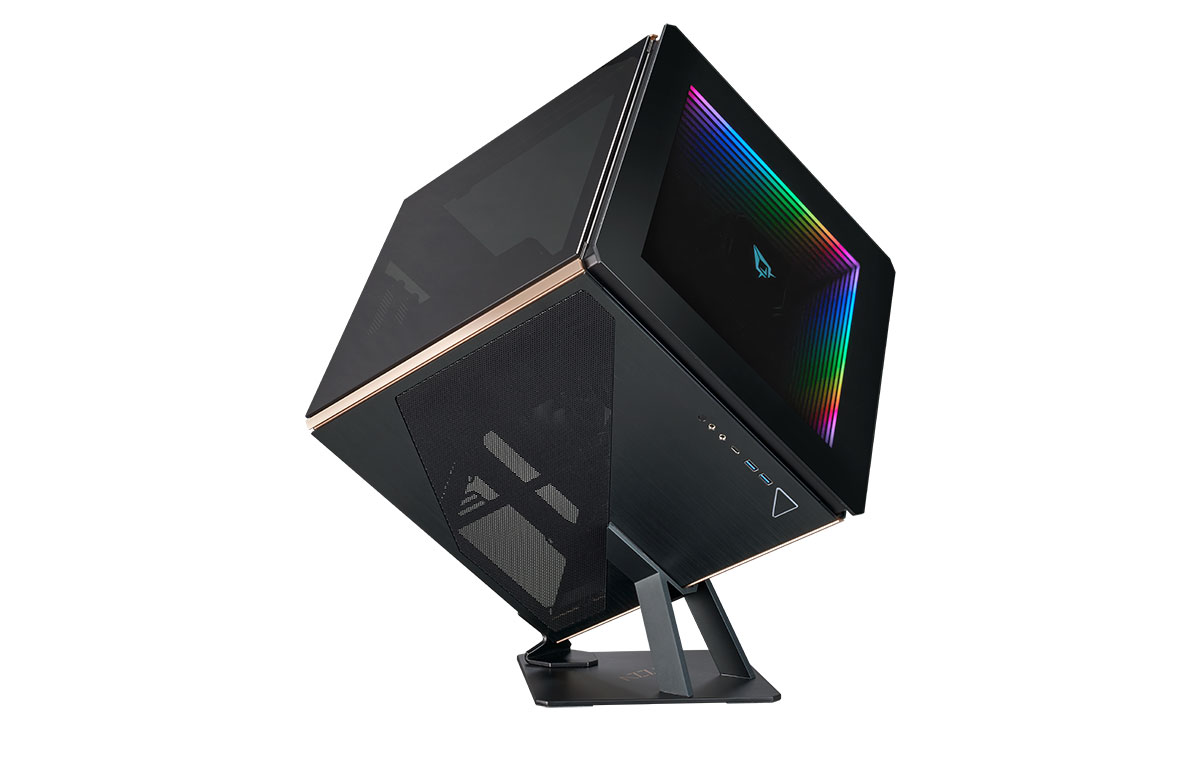 Taiwanese PC parts company Azza is no stranger to peculiar-looking cases. Though they do make regular towers with the occasional flare of sharp angles and contours, their 'Unlimited' series of cases are designed to be luxurious and/or loud. One example of the latter is the Overdrive, an open-concept engine-inspired case that was released earlier this year and went for US$600.

An example of the former is their recently-announced REGIS 902 case, a cube-shaped case with what Azza dubs 'infinity mirror' RGB on the front panel. The REGIS has an aluminum stand that elevates the case from the ground, and to make it even more luxurious, has three black-tinted glass panels on two sides and front of the case, and two brushed aluminum mesh panels on the bottom to allow for cooling and easy access, with gold trim on the edges.

In terms of practicality, the REGIS 902 is an ATX-compatible case that supports GPUs with a length of up to 336mm long horizontally and 320mm long vertically. If you're placing a GPU longer than 300mm on the side, connected through a PCIe cable, however, you should note that the SSD tray needs to be removed.

As for cooling, the REGIS also has clearance for 210mm tall CPU coolers, and supports up to two 240mm/280mm radiators. For case fans, this translates to support for 2x120mm or 2x140mm fans on the right and left, while the rear supports either a single 120mm or 140mm fan. In terms of storage, the REGIS has one 2.5-inch drive bay and one 3.5-inch drive bay, meaning you can either hold a full-size 3.5-inch HDD along with a 2.5-inch SSD or HDD, or two 2.5-inch SSDs or HDDs. The case weighs 12.05kg, while the dimensions sit at 610 x 481 x 529mm with the stand included, making it rather tall. The CNC-milled 8mm-thick stand allows the REGIS to sit at a 45-degree angle, and the mesh at the bottom of the case along with being off the ground should help a bit with improving airflow. An added bonus is that the panels are mounted on snap pins, making removal easy and toolless. As a side note, at its highest point, the stand can elevate the REGIS as far as 175mm off the ground.

As for the addressable RGB (ARGB), the front panel uses what Azza calls an 'ultra-thin' lighting module that goes around the front of the case. The RGB can be controlled through a button on the case itself, or can be synchronised with motherboard software, and comes with 17 lighting modes. Onboard control for fans and RGB comes from the PWM/ARGB hub, which can control up to seven ARGB devices, six PWM fans. The PWM/ARGB hub also comes with a SATA power connector, and of course, 3-pin ARGB and 4-pin PWM fan connectors to the motherboard.

Finally, for the front-facing ports you get on the case, apart from the power and RGB LED buttons, you get twin USB 3.0 through USB-A, 1x USB-C port and a headphone jack. Though it's not an astounding collection, it should get you by for basic accessories like plugging in some ad-hoc input devices and plugging in some external storage drives.

This certainly is quite a looker of a case, and if you're a fan of something that's as eye-catching as a floating cube, the REGIS 902 will cost you US$399.99, including the aluminium stand, hub and a pre-installed 140mm case fan. However, that's just the cost of the case without shipping charges, which would set you back another US$145 to get it delivered to Singapore according to this Amazon listing.

Join HWZ's Telegram channel here and catch all the latest tech news!
Our articles may contain affiliate links. If you buy through these links, we may earn a small commission.
Previous Story
myFirst launches updated smart ‘watchphone’ for kids - the Fone R1s
Next Story
Oppo joins the ranks of companies making their own chips with the MariSilicon X