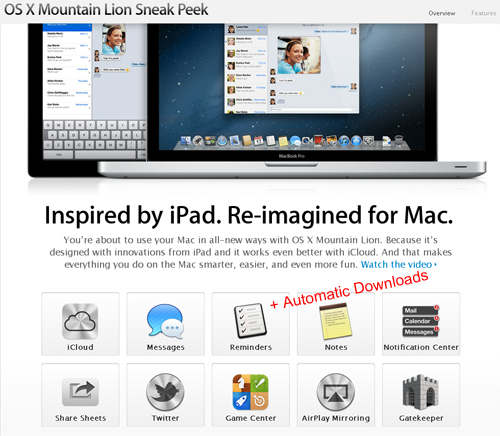 As some Apple fans may have already discovered, OS X Mountain Lion will incorporate features that replicate the iOS experience on your desktop. Some of the more notable ones include the syncing of Notes, Notification Center, Messages and even Game Center.

Now, another iOS exclusive feature might make its debut in OS X Mountain Lion - the “Automatic Downloads” feature. This feature lets you download an app from the Apple App Store on one OS X machine, and have the same app appear on your other OS X devices. This is particularly useful if you have more than one Mac (say, one for work, one personal).

According to 9 to 5 Mac, this feature doesn’t work in the OS X Mountain Lion Developer Preview 3 right now. However it’s definitely in there, and chances of seeing it in the final release of Mountain Lion is very high.

Join HWZ's Telegram channel here and catch all the latest tech news!
Our articles may contain affiliate links. If you buy through these links, we may earn a small commission.
Previous Story
Toshiba Presents Business Notebooks and Desktops for Busy Professionals
Next Story
Retina Graphics Apps Point to Retina Display on Thinner Macbook Pros