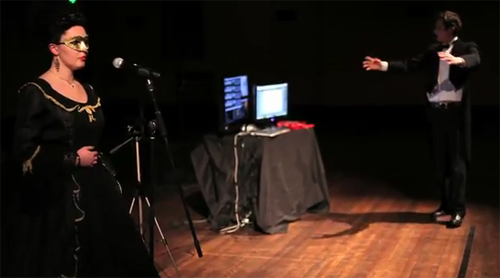 Think Microsoft's Kinect is all about motion-sensing games? You'll have to re-evaluate what you know about Kinect, when you hear (and see) what Australian composer and developer Chris Vik did with it using Kinectar, a toolkit that uses the Kinect sensor as a MIDI controller.

Developed by Vik himself, Kinectar is essentially a software that customizes how the Kinect sensor will capture and output MIDI notes based on your movement. The Australian composer/developer has been working on composing and playing music using Kinect's motion sensor since April 2011, and his project resulted in a few interesting concepts.

One such project is the use of Kinect to play an 83-year-old organ in the Melbourne Town Hall, which has been upgraded to support MIDI in the 90s. Together with singer Elise Richards, Vik conducted a full performance (with a conductor garb for effect) in the town hall last November. In the video below, Vik explains that the software "splits up the space that you move your hands in to separate zones, and each of the zone is associated with a chord, a note or a scale", with a short clip of his performance at the said town hall attached.

This isn't the only project embarked by Vik for his Kinectar software. Earlier this year, Kinectar was also used as part of a dance performance. Unlike Dance Central which gets you dancing to a preset beat, Vik takes it one step further and engages a dancer by the name of Paul Walker to play the music through his dance moves.

Microsoft's Kinect has proven to be both entertaining and practical. And with the imminent update for its Kinect for Windows, we should expect developers coming up with more innovative (and perhaps zany) methods to utilize the motion-sensing console from Microsoft.

Source: Chris Vik via The Verge

Join HWZ's Telegram channel here and catch all the latest tech news!
Our articles may contain affiliate links. If you buy through these links, we may earn a small commission.
Previous Story
Facebook Snaps up Instagram for US$1 Billion
Next Story
Cubitek Expands Line of Chassis with the ICE Series