With its seven displays, the Aurora 7 is a multitasker's dream notebook

With its seven displays, the Aurora 7 is a multitasker's dream notebook 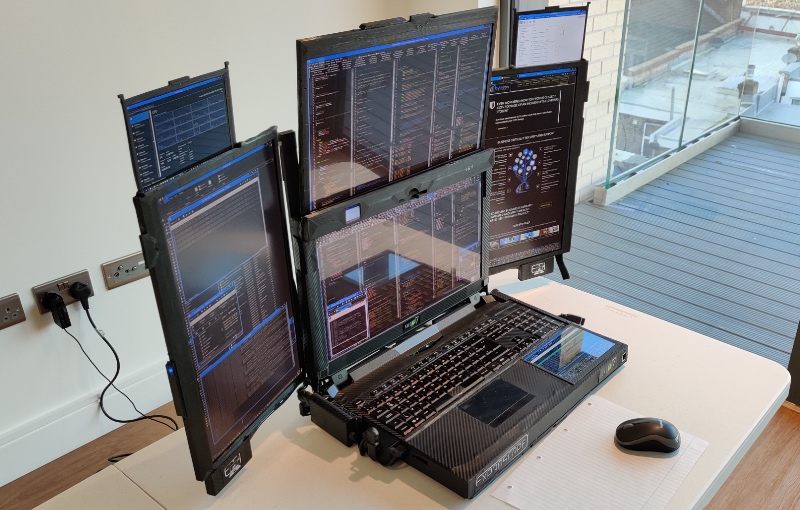 For multitaskers, the problem with working on notebooks is the lack of screen real estate. You can only have one, and even if it's a high-resolution display, size is a problem.

Expanscape has the solution and it's called the Aurora 7. Essentially, it's a notebook with, you guessed it, seven displays.

The company says the Aurora 7 was designed as a mobile security operations centre, but it can also be used by content creators, data scientists, and stock traders.

It's a beastly looking thing, more akin to seven displays strapped to a big black box than anything else.

These are powered by an Intel Core i9-9900K processor with a GeForce GTX 1060 GPU. These components were chosen for their blend of performance and portability.

Yes, the Aurora 7 can be run off battery. The main battery is 82Wh and it has a secondary 148Wh battery for the displays. Battery life is up to an hour, which isn't too bad considering the number of displays it has to power.

The Aurora 7 can be folded down for easy transporting. With all of its displays, it comes it at 11cm thick. Weight is said to be around 12kg. You'll need a strong back to carry it. See how it unfolds here.

Judging from the photos so far, the Aurora 7 looks a little rough but at least the company is willing to sell it. The same cannot be said for Razer's ambitious Project Valerie concept.

Expanscape is inviting interesting parties to reserve a prototype but said parties will have to sign a nondisclosure agreement prohibiting them from publicly sharing the price. In other words, expect the Aurora to be very expensive.

Join HWZ's Telegram channel here and catch all the latest tech news!
Our articles may contain affiliate links. If you buy through these links, we may earn a small commission.
Previous Story
The Falcon and the Winter Soldier got a big new trailer during the Super Bowl
Next Story
Hyundai and Kia not in talks with Apple to develop autonomous vehicle