This is the Auberon, a made-in-Singapore firefighting exoskeleton

This is the Auberon, a made-in-Singapore firefighting exoskeleton 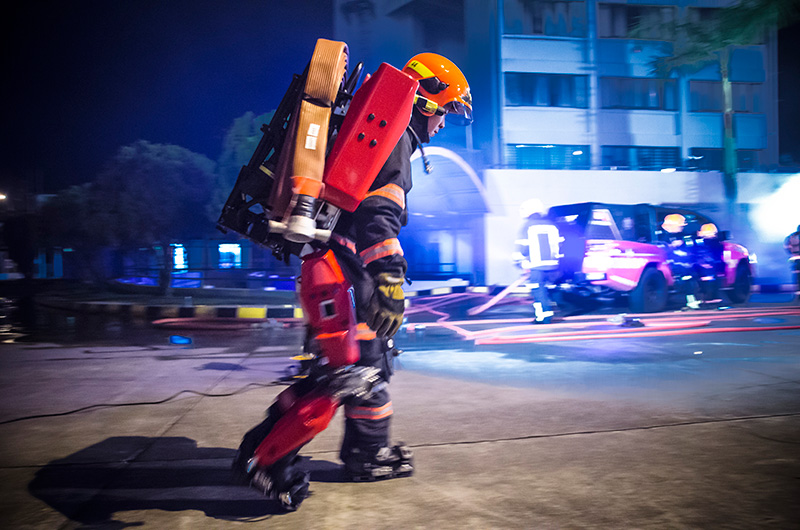 We’re still a long way away from an Iron Man exosuit, but firefighters in Singapore will have an exoskeleton to help them fight fires.

The Auberon, Singapore’s first pneumatic powered exoskeleton for firefighters, was built by homegrown company Hope Technik. It was conceptualized with the Singapore Civil Defense Force (SCDF) and Ministry of Home Affairs’ (MHA) Office of the Chief Science and Technology Officer.

When worn, the Auberon helps its operator carry heavy loads up multiple flights of stairs. A firefighter can carry up to 40kg of gear, which includes breathing apparatus, hoses, nozzles, and power tools. As you can imagine, that’s a lot of strain on the body in a high-intensity, high-stakes environment.

Ng Kiang Loong, Chief Programme Officer of Hope Technik, says that by wearing Auberon, the user will feel less muscle strain carrying the firefighting equipment, especially on the shoulders. “The weight of the equipment will be passed through the exoskeleton and transferred to the ground via the footplate,” Ng says. “In addition, pneumatic pistons on the legs of Auberon assist in pushing the fireman up when he climbs stairs, making the process less physically demanding.” 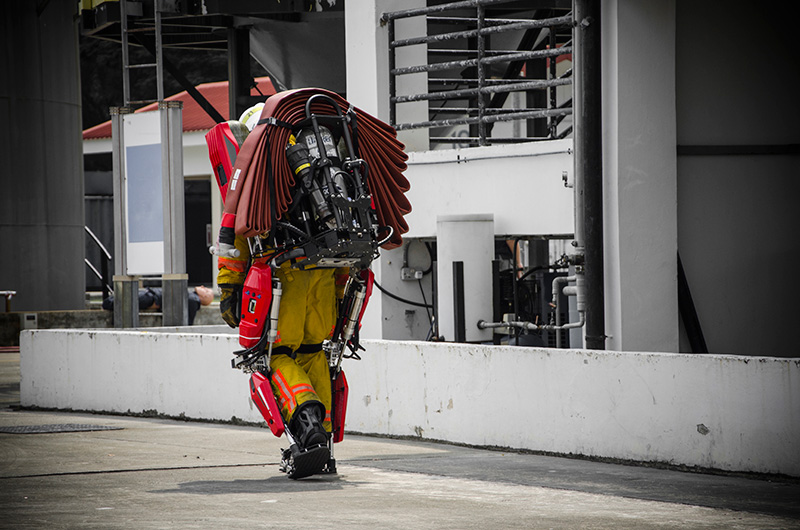 It’s key that the Auberon is a fully mechanical system. Any electrical parts and batteries would become safety hazards when exposed to high temperatures or water. The Auberon uses two 6.8 liters compressed air tanks to power itself. Hope Technik says that’s enough air to power the exoskeleton up and down 12 stories three times with air to spare.

Plus, there’s a quick release catch so a fireman can quickly jettison the skeleton in an emergency — like an ‘eject’ button, except that nobody’s flying through the air. The Auberon belongs to Hope Technik’s augmentative technology group of devices, and is currently undergoing trials.

I couldn’t resist asking when we could expect an Iron Man-like suit in real life. Ng replied, “Hope Technik has been developing exoskeleton technology in various applications for more than five years. Some of these include back support exoskeletons - Audra Exoskeleton - that help workers whose work require repetitive bending and lifting actions as well as healthcare-related exoskeletons that aid in the rehabilitation of recovering stroke patients. While Tony Stark’s Iron Man is still some years ahead of what current technology can achieve, I don’t think it’s entirely impossible!”

Join HWZ's Telegram channel here and catch all the latest tech news!
Our articles may contain affiliate links. If you buy through these links, we may earn a small commission.
Previous Story
Lian Li just made an RGB power cable with customizable lighting (Updated with local pricing)
Next Story
DITA Audio releases Fealty and Fidelity, two headphones that look alike but have different aspirations