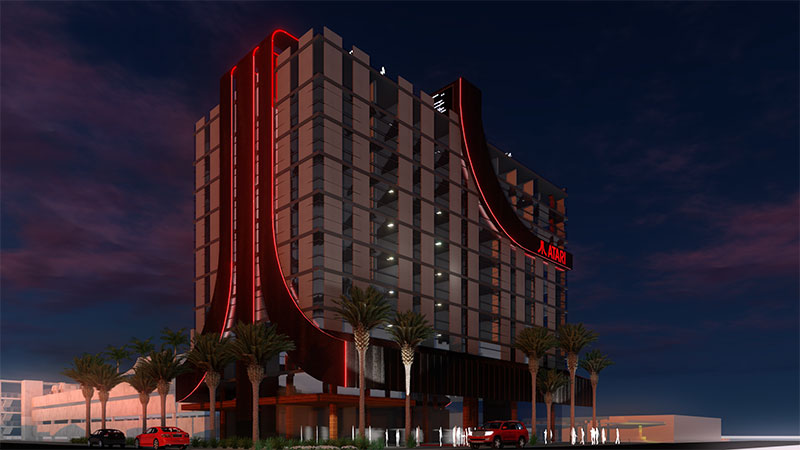 Atari is making a foray into the hospitality industry. The company has announced a licensing deal with US real estate developer True North Studio and GSD group to build eight Atari-branded hotels in the US, featuring facilities like an Atari "gaming playground", a state-of-the-art esports studio, and even a movie theatre.

There will also be co-working spaces, meeting and event rooms, and restaurants and bakeries, making the hotels suitable for both families and business travellers. It's a little odd to think of a video game-themed hotel also wanting to appeal to business professionals, but esports is a booming business now, and the new hotels could possibly end up attracting business people in the gaming industry.

The first hotel is planned to break ground in 2020 in Phoenix, Arizona, with others expected in Austin, Chicago, Denver, Las Vegas, San Francisco, San Jose, and Seattle. The Phoenix hotel will be located close to the first Woz U university campus, founded by Apple co-founder Steve Wozniak.

Atari will receive 5 per cent of hotel revenue, in addition to a US$600,000 advance for closing the deal. The company hasn't had the best time in recent years, with the development of its Atari VCS retro console reportedly running into difficulties. The brand also no longer carries the same weight as it once did, so it really needs this hotel deal to be a success.

Join HWZ's Telegram channel here and catch all the latest tech news!
Our articles may contain affiliate links. If you buy through these links, we may earn a small commission.
Previous Story
NZXT's new Kraken Z63 and Z73 AIO coolers come with customisable LCD displays
Next Story
Doom Eternal will not have microtransactions or cash items