ASUS' Z490 motherboards are bristling with ports and connectivity features 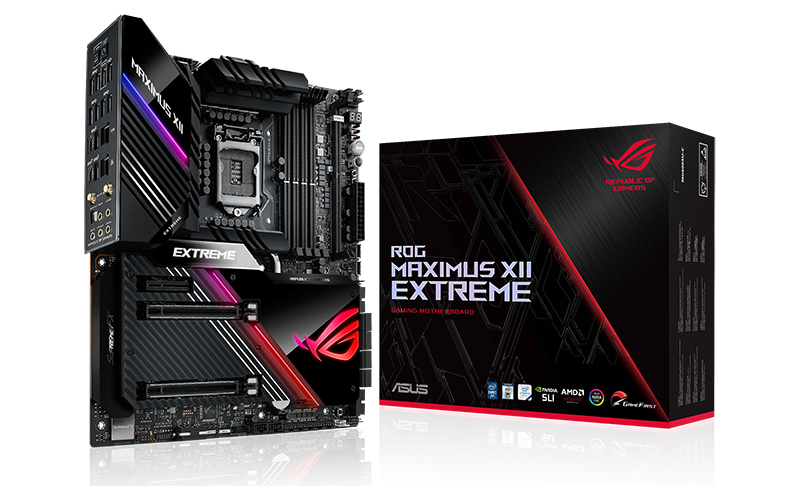 Updated on 11 May 2020: Added details on local availability and price.

Intel's Z490 chipset brings a new LGA1200 socket and support for the company's latest and greatest 10th Gen desktop processors, which predictably enough, are still based on the 14nm process node. However, due to the increased power requirements of the higher-end 10-core chips, board makers have also had to install more robust power circuitry to accommodate the overclocks that enthusiasts will no doubt be trying to squeeze from the chips.

To woo gamers looking to upgrade, ASUS has announced a literal barrage of Z490 motherboards, ranging from the entry-level Prime series to the no-holds-barred ROG Maximus XII Extreme. ASUS is also touting its AI Overclocking tech, which utilises a proprietary algorithm to predict optimal clock speeds and voltage settings for the motherboard, and OptiMem III, which supposedly ensures better signal integrity with an improved memory trace layout.

And like most other Z490 boards makers, ASUS is also taking advantage of the integrated Intel Wi-Fi 6 CNVi in the chipset to offer Wi-Fi 6, alongside support for 2.5G Ethernet through a single PCIe 3.0 x1 lane.

Here's an overview of all the Z490 boards it has announced so far:

That's a whopping total of 17 Z490 motherboards for everyone from content creators to every type of gamer, with options for those of you looking to put together small form factor systems as well. 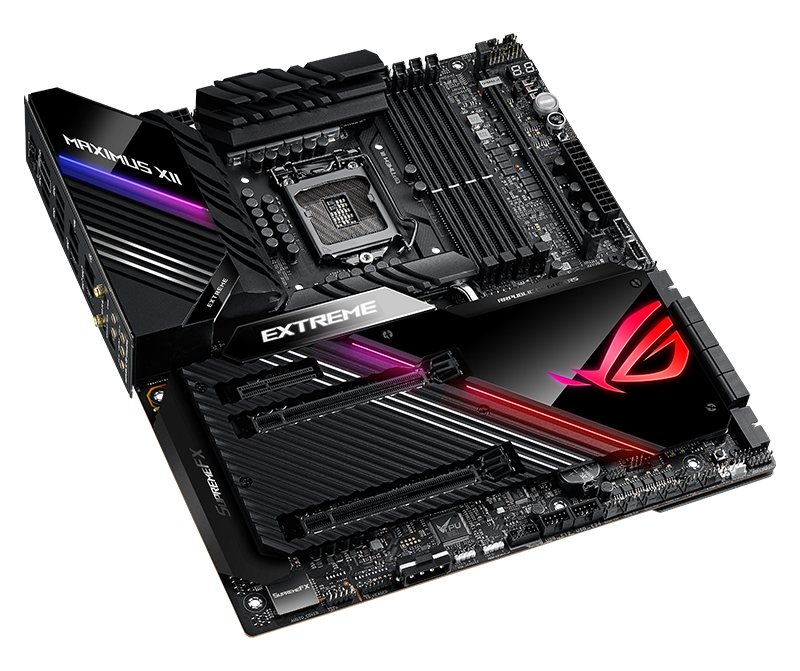 The E-ATX ROG Maximus XII Extreme sits at the top of the pack, featuring a beefed-up VRM design that also includes thermal pads to aid in heat transfer and what ASUS calls ProCool solid pins for more stable power delivery. There's also a solid aluminum plate that works to dissipate heat from the PCIe storage drives.

On top of that, ASUS is touting out-of-the-box compatibility with over 80 per cent of 4,600MHz DDR4 memory kits, so you can pair the fastest 10th Gen chips with speedy memory clocks as well.

This board was built to cater to the most extreme configurations, serving up no fewer than four M.2 sockets, although two are located on a separate DIMM.2 add-on card that is bundled with the board. Finally, the board ships with a ThunderboltEX 3-TR card as well, which provides bi-directional speeds of up to 40Gbps via a single cable. There's also an onboard Thunderbolt 3 header, which can support up to six devices in a daisy chain and supply up to 100W of power.

Then there's the ROG Maximus XII Apex, which is ASUS' overclocking-optimised board, featuring a six-layer PCB and the same 16 teamed power stage design as the Maximus XII Extreme. However, as with previous Apex boards, it comes with just two DIMM slots instead of the usual four for greater overclocking stability. On the other hand, the ROG Maximus XII Formula is targeted at liquid cooling enthusiasts, with an integrated CrossChill EK III hybrid water block built into the VRM heatsink. Elsewhere, you'll also find 10G and 2.5G Ethernet ports, in case you actually have a wired connection fast enough to take advantage of that. Here's a closer look at the motherboard and further mouth-watering details in our quick first looks article. 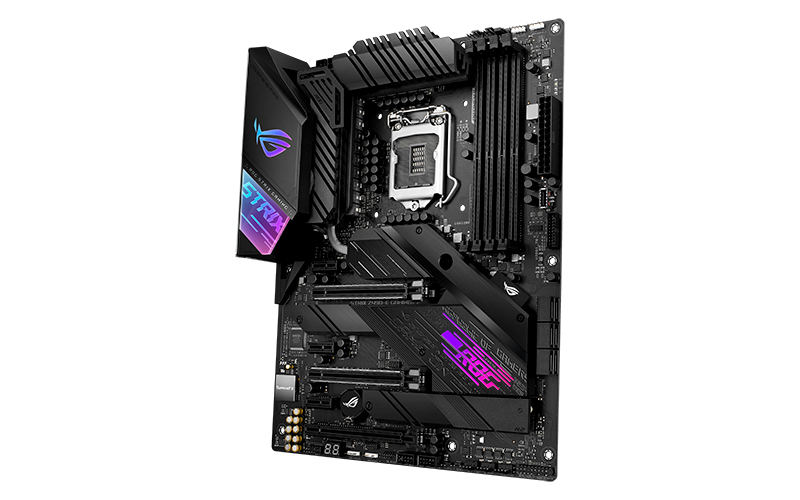 The ROG Strix boards comprise ASUS' 'mainstream' line-up. With a total of seven boards that differ mainly in terms of the suffix their model name ends with, it can be a little hard to differentiate between them all. Suffice to say, you'll find various combinations of PCIe slots, USB ports, and varying support for SLI and CrossFire. They come in different form factors as well, with the mini-ITX ROG Strix Z490-I Gaming and the micro-ATX Z490-G boards catering to those looking to build more compact systems. Moving further down the line-up, you get the TUF Gaming models, which retain their traditional focus on reliability. The TUF Gaming Z490-Plus utilises a six-layer PCB and a 12+2 teamed power stage design, in addition to two PCIe x16 slots, one of which boasts metal reinforcements. There is no support for SLI here however, and the boards will only work with AMD CrossFire. You also lose the speedier 2.5G Ethernet ports, and will have to settle for more modest Gigabit Ethernet connectors. Finally, the onboard audio codec is a Realtek S1200A, and not the SupremeFX S1220A used by the higher-end boards. 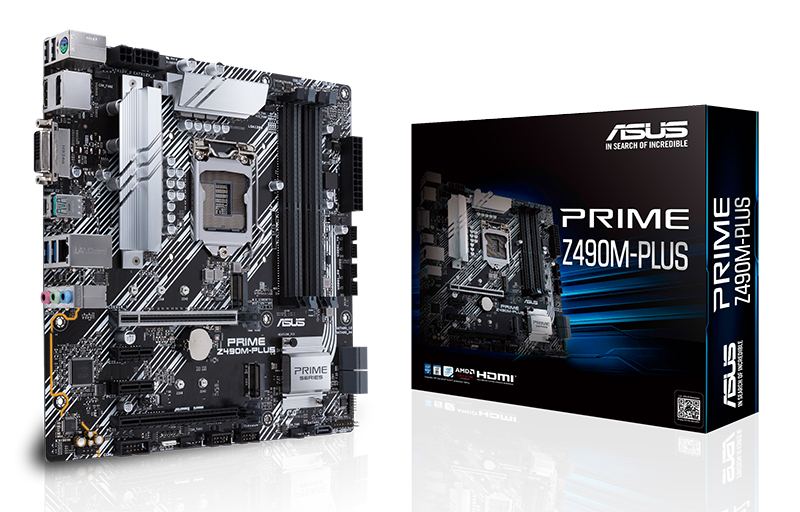 To cap things off, there's the Prime series boards, which are billed as boards for more affordable, well-rounded setups. The Prime Z490-A is the most feature-rich of the lot, with an attractive brushed aluminum heatsink and integrated white I/O shield. It also uses a 12+2 teamed power stage design and a six-layer PCB, and there is even support for a quick overclock with AI Overclocking. The other Prime boards are far more stripped-down affairs, lacking the beefy VRM heatsink of the Prime Z490-A. The lone creator board is the ProArt Z490-Creator 10G, which goes after content creators with two Thunderbolt 3 ports. You'll be able to support up to 12 devices in a daisy chain, which sounds like more than anyone could need. In addition, the three PCIe x16 slots support three GPUs in a x8/x8/x4 topology, so you'll be able to get a pretty decent multi-GPU setup going here.

All ASUS Z490 motherboards will be available starting 29 May from local authorised retailers. In the meantime, they're available for pre-order from Lazada, Qoo10, and Shopee.

Join HWZ's Telegram channel here and catch all the latest tech news!
Our articles may contain affiliate links. If you buy through these links, we may earn a small commission.
Previous Story
Thermaltake's TOUGHRAM Z-One are some of the sleekest looking memory modules around
Next Story
HyperX and Ducky just made a limited edition Ducky One 2 Mini gaming keyboard