ASUS has announced the VivoStick TS10, a pocket-sized PC that goes up directly against the likes of the second-generation Intel Compute Stick. It is already available to buy locally at S$239, which is only slightly more than the stuttering, first-generation Compute Stick.

Its other specifications are remarkably similar to the Compute Stick, including the 2GB of RAM and 32GB of eMMC flash storage. It also has all the expected connectivity options, which means 802.11ac Wi-Fi, Bluetooth 4.1, and even USB 2.0 and 3.0 ports. Both USB ports are located on the stick PC itself, a welcome convenience that will allow you to plug in both a wired mouse and keyboard if you really don’t have wireless peripherals on hand.

It will work with any display with an HDMI port, effectively turning it into a functional Windows 10 PC.

Other nice touches include a built-in 3.5mm headphone jack and a protective cap that actually matches its body. It also comes bundled with helpful additions like a VivoStick Holder and extension cable, which allows you to mount the VivoStick flat against the surface of your TV. This could come in handy when you don't want the stick PC sticking out like a sore thumb, or when your display happens to be located against a wall. 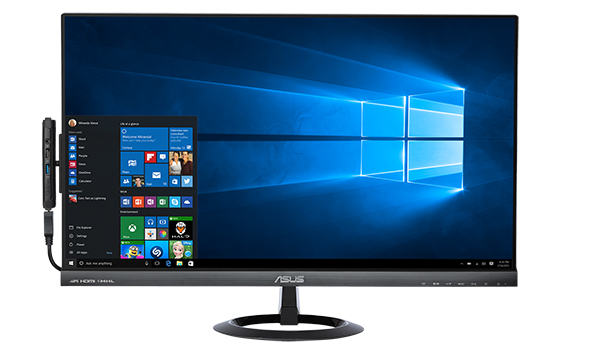