The ZenBook lineup can be a little confusing

Note: This article was first published on 3rd September 2020, updated on 9th October with pricing details of the ZenBook Flip 13 (UX363), and now again as the ZenBook Flip S (UX371) and the Zenbook 14 (UX435) models are available. 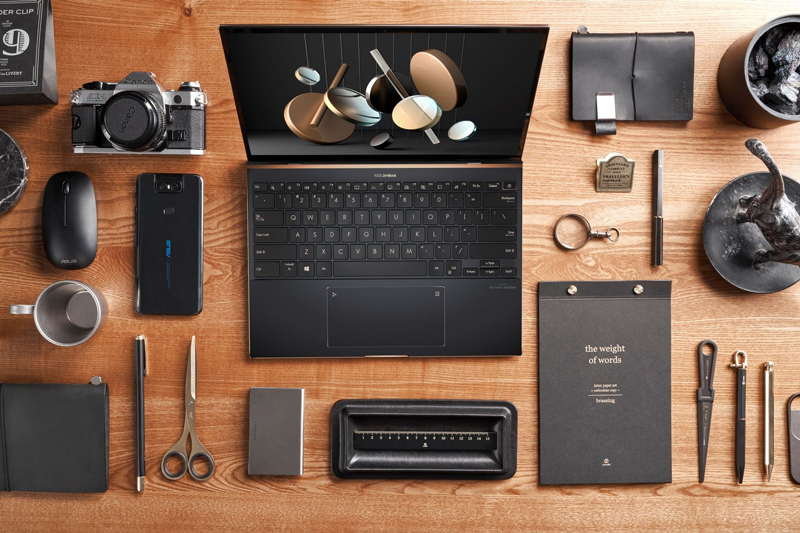 Intel has announced their new 11th Generation Tiger Lake processors, the chipmaker’s newest processors designed specifically for use in notebooks, earlier today. Also noteworthy is Intel rebadging its “Project Athena” initiative for next-gen notebook designs as “Intel Evo”. While Intel has already mentioned brands such as Acer, Dell and HP will be releasing their notebooks later this year, ASUS was eager to show off their own contributions with their ZenBook series.

Now, it’s important to note that not all notebooks powered by a 11th-Gen Core processor (Tiger Lake) is certified and labelled as an Intel Evo notebook. There are certain requirements to be met, which you can read about here. To that end, ASUS has announced five notebooks but only one is verified as an Intel Evo platform notebook design. Fair warning; the model names can get a little muddly together. 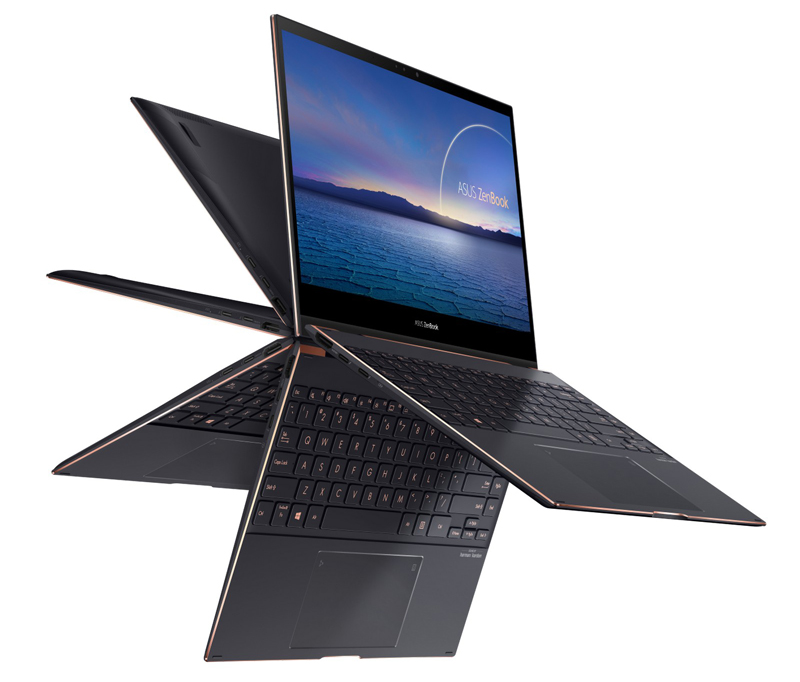 The star of the show, is without a doubt the ZenBook Flip S. It is a classy-looking ultra-thin convertible measuring at just 13.9mm thin and a mere 1.2kg light, but don’t be fooled by its similarity in looks to its other ZenBook siblings as there’s a lot going on under the hood. The display, for example, is a 4K OLED NanoEdge True-Black certified with DisplayHDR 500 touchscreen, and like almost all of its top of the line notebooks, PANTONE Validated as well. It will also support 4,096 levels of pressure with the new ASUS Pen.

Power is provided by up to an 11th Generation Intel Core i7 processor with Intel Iris Xe graphics, combined with up to 16GB RAM and up to a 1TB PCIe SSD. Despite its svelte body, it offers a surprising amount of connectivity with two Thunderbolt 4 USB-C ports, a USB 3.2 Type-A port, and an HDMI port. Also, while ASUS claims the ZenBook Flip S can last for up to 15 hours, it is an Intel Evo certified notebook. This means the ZenBook Flip S will meet and exceed all your expectations for high speed connectivity, long battery life, great performance and engineered with the highest standards to deliver premium experiences. 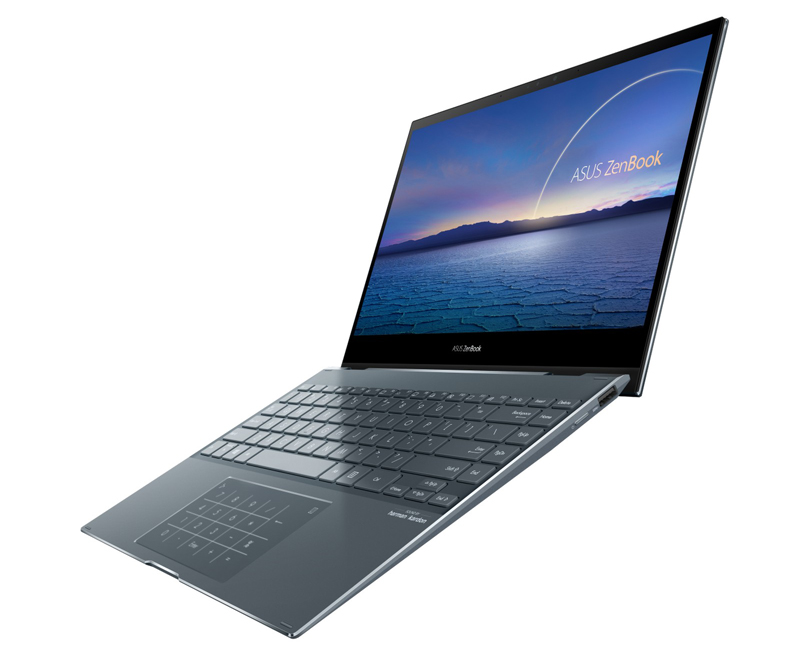 ASUS being ASUS, though, just can’t seem to get away with their often-times confusing line-up. Presenting the ZenBook Flip 13, which is just as thin as the ZenBook Flip S above but only just a wee bit heavier at 1.3kg. It also has the 360-degree ErgoLift hinge that allows it to be used as a notebook or tablet, folded to stand or as a tent. It’s even compatible with the ASUS Pen. The key difference here is the Full-HD or 1080p OLED touchscreen display.

Also at 13.9mm thin, the ZenBook Flip 13 packs comprehensive I/O options with a full-size HDMI, USB Type-A and two Thunderbolt 4 USB-C ports. In fact, ASUS says it is the world's thinnest 13.3-inch convertible laptop with such an array of full-sized port options. Like some of the premium ZenBook models, this notebook will also feature the dual-function touchpad thanks to its NumberPad 2.0.

Specifications wise, the ZenBook Flip 13 (UX363) is powered by up to an 11th Generation Intel Core i7 processor with Intel Iris Xe graphics, up to 16GB of memory, and 512GB NVMe PCIe 3.0 SSD. Why not just have two ZenBook Flip S models, one with a 4K OLED and the other with a 1080p OLED screen, ASUS? Perhaps it’s the little interesting fact that, despite the uncanny resemblance, the ZenBook Flip 13 isn’t certified as an “Intel Evo” designed notebook. 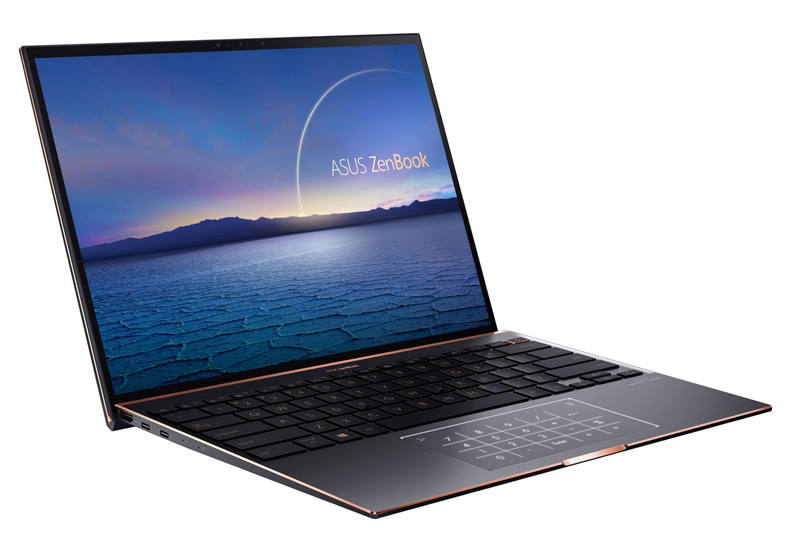 At 15.7mm thin and 1.35kg, the ZenBook S is a bit chunkier than the above convertibles, but nonetheless there are sleek technologies to be found here. Such as the 3.3K resolution (3,300 x 2,200 pixels) NanoEdge PANTONE Validated touchscreen with a 3:2 aspect ratio that fits more on the screen, providing a larger visual workspace and reducing the need for scrolling. It also comes with an impressive 67Wh battery with fast charge support to give it up to 12 hours of usage. But what also caught my attention is the new and elegant Jade Black livery features on the lid, with contrasting Red Copper diamond-cut highlights, and a special off-center ASUS logo. It looks really classy.

Just like the ZenBook Flip notebooks, the ZenBook S is powered by up to an 11th Generation Intel Core i7 processor, with up to 16GB, and up to a 1TB SSD. It also features full-size HDMI and USB 3.2 Type-A ports, along with two Thunderbolt 4 USB-C ports and a microSD card reader.

No word yet on its availability locally, but we'll update as soon as we get wind of it. 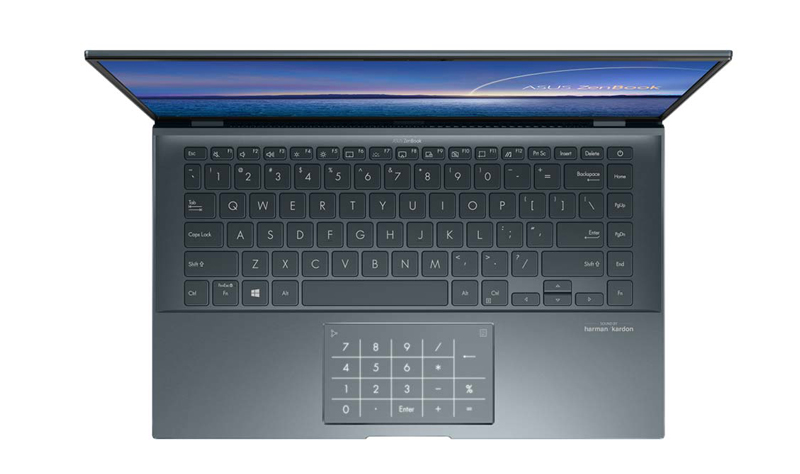 Weighing as little as 980g, the ZenBook 14 Ultralight (UX435EAL/EGL) is a straight-forward, ultralight, and ultraportable class in the ZenBook line-up. It is equipped with a four-sided near frameless 100% sRGB NanoEdge display, featuring ultra-slim bezels that give it a 92% screen-to-body ratio. It’s not the first with a near frameless display but it’s impressive, nonetheless.

On the inside, the ZenBook 14 Ultralight is powered by up to an 11th Generation Intel Core i7 processor with Intel Iris Xe graphics (UX435EAL) or NVIDIA GeForce MX450 discrete graphics (for the UX435EGL variant). Two Thunderbolt 4 USB-C, USB 3.2 Type-A, HDMI 2.0, and a microSD card reader ports round up its connectivity.

Priced at S$2,398, the ZenBook 14 Ultralight is available from 4th December at the ASUS Online Store and all authorized retailers. 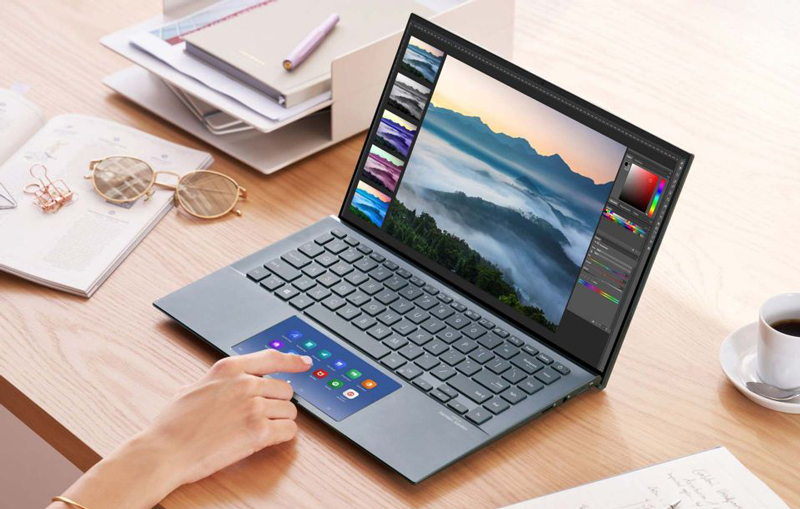 It’s a little confusing by now, I get it. The ZenBook 14 ScreenPad is an all-new ultraportable that weighs at 1.19kg. It’s not same as the ZenBook 14 Ultralight above, despite it featuring the same NanoEdge display with a 92% screen-to-body ratio and that fact that it’s also powered by up to 11th Generation Intel Core processors with Intel Iris Xe integrated graphics (for the UX435EA) or NVIDIA GeForce MX450 discrete graphics (the UX435EG).

The key differentiating feature for the ZenBook 14 is the ASUS ScreenPad 2.0, which functions as both a trackpad and touchscreen. The touchscreen mode has an interface that was modelled after smartphone UIs, and lets you do things like referring to your notepad while you type up a report.

Locally, ASUS is bringing in the ZenBook 14 ScreenPad with NVIDIA GeForce MX450 discrete graphics  (UX435EG), fitted with 16GB of RAM, 1TB of storage and priced at S$2,198. If you don't mind a slightly 'heavier' notebook (compared to the Ultralight model), this is a cheaper option that comes with more functionality (ScreenPad 2.0). It will be available from 11th December at the ASUS Online Store and all authorized retailers.

Join HWZ's Telegram channel here and catch all the latest tech news!
Our articles may contain affiliate links. If you buy through these links, we may earn a small commission.
Previous Story
Get into the Black Friday shopping mood early with Courts
Next Story
Sony's two new laser projectors aren't just a flash in the pan