ASUS’ new motherboard range consists of a whole spectrum of models, from the fan-favorite Republic of Gamers (ROG) motherboards to the brand new Prime motherboards.

First up in line is the company’s new and improved ROG Maximus IX and Strix motherboards. As before, the Maximus IX series is comprised of: 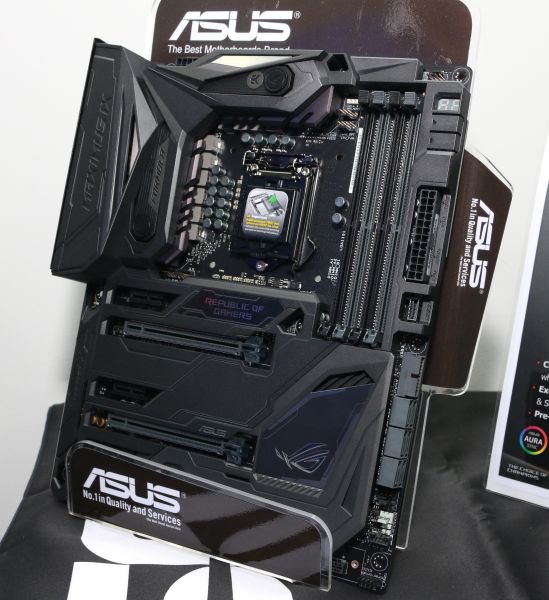 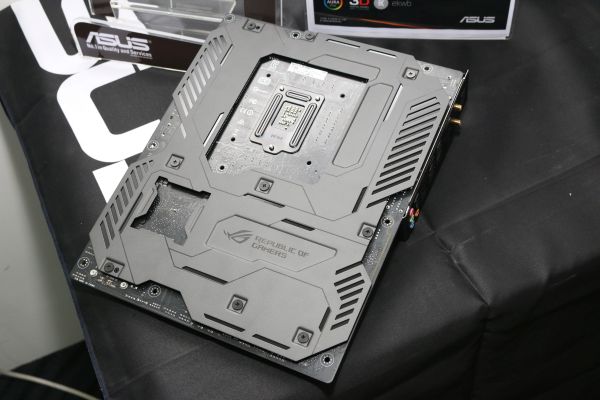 The motherboard itself has built-in CrossChill EK II VRM blocks that allow custom case modders to extend their liquid-cooling customization directly into the motherboard as well. 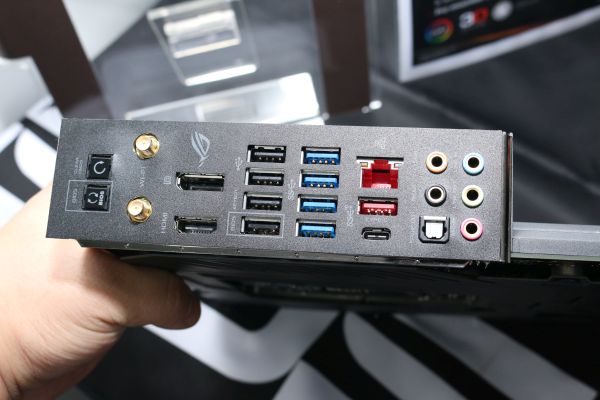 Other features on the Maximus IX Formula include a pre-mounted I/O shield that ASUS says is 2.5 times more resilient than the industry standard I/O shield, and is far less likely to suffer from a static discharge. Also, the motherboard is fitted with a backplate to add more rigidity and to protect it from bending.

The image below lists down the full details of the Maximus IX Formula. 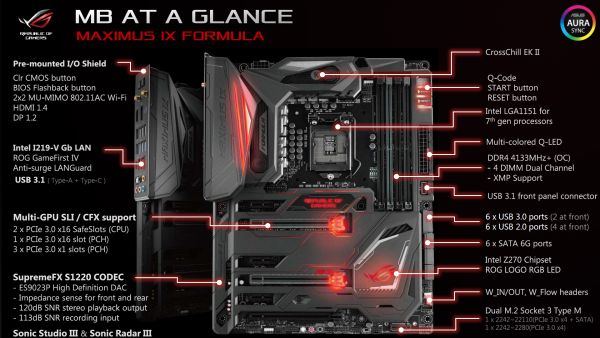 Next on the list is the Maximus IX Code, ASUS’ latest addition to the Maximus motherboard lineup. 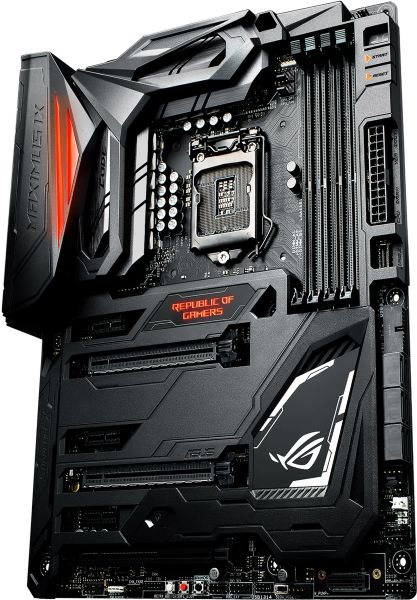 Designed to be stylish and made to perform, the Maximus IX Code is an ATX motherboard that’s covered with ASUS’ ROG Armor. The armor serves a dual purpose, the primary purpose being to make the motherboard look good, and its secondary purpose is to protect the component from dust build up.

Like the Maximus IX Formula, the power and reset button at the top right of the motherboard is also enveloped by the ROG Armor, providing users with a satisfying click whenever it’s pressed.

Unlike the Maximus IX Formula, the Maximus IX Code does not have a EK block built on to its VRAM modules. Instead, ASUS uses an aluminum chassis that envelops both the front and the back of the motherboard, allowing the metal to act as a heatsink.

The image below is the full specifications of the Maximus IX Code motherboard, alongside a summarized component list for both the Formula and Code. 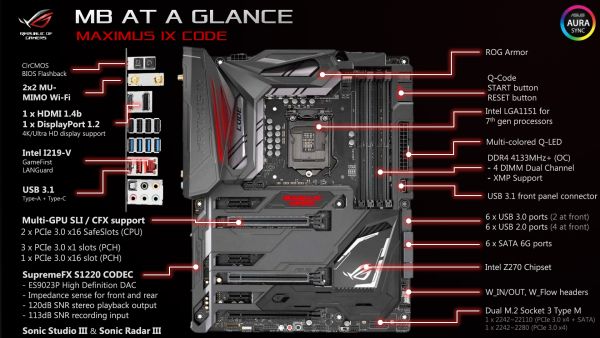 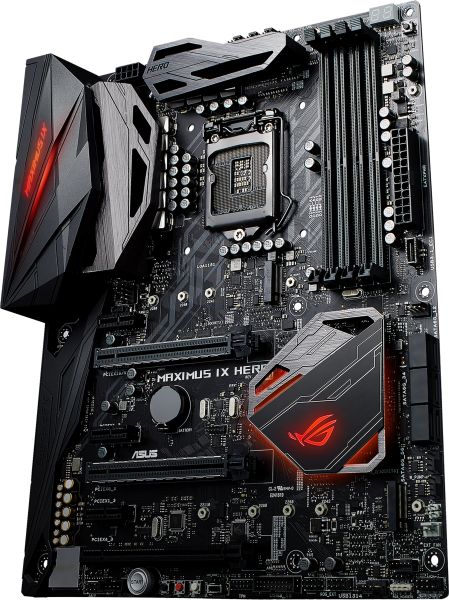 Like the Maximus IX Formula and Code, the Maximus IX Hero comes with a plethora ports and features, such as multi-GPU support for NVIDIA’s SLI and AMD’s Radeon CrossFireX, as well as ASUS’ SupremeFX DAC and the built-in Sonic Studio III & Sonic Radar III sound card. 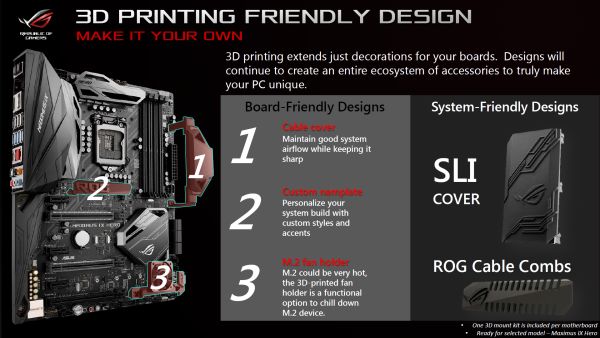 On that note, the new Sonic Studio III sound card that is built into the Maximus IX motherboards now allows users to map out their audio streams to different output, allowing users to compartmentalize their audio choices without any fuss. 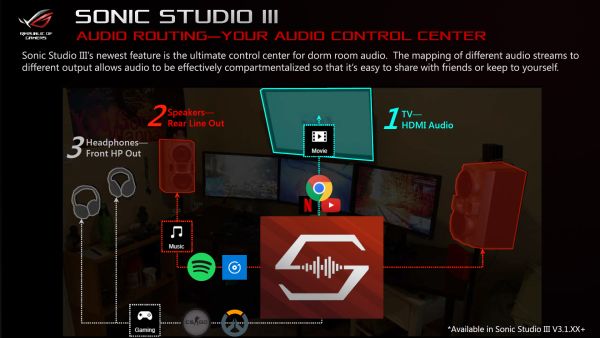 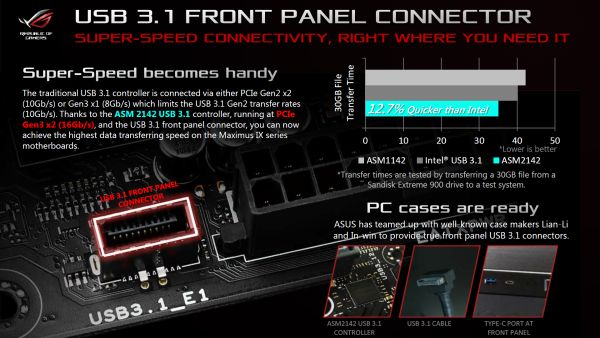 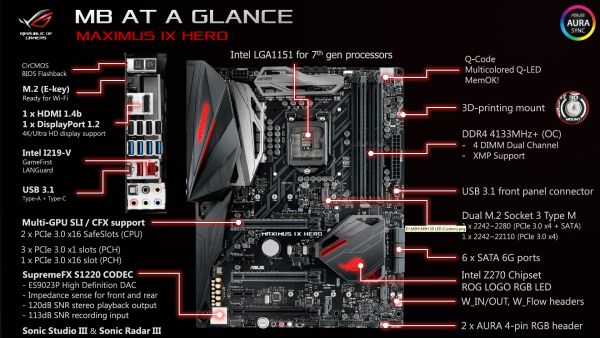 ASUS’s ROG Strix series motherboards also follow a similar structure as the Maximus IX motherboard lineup, the only difference being the general design of the motherboards' heatsinks. 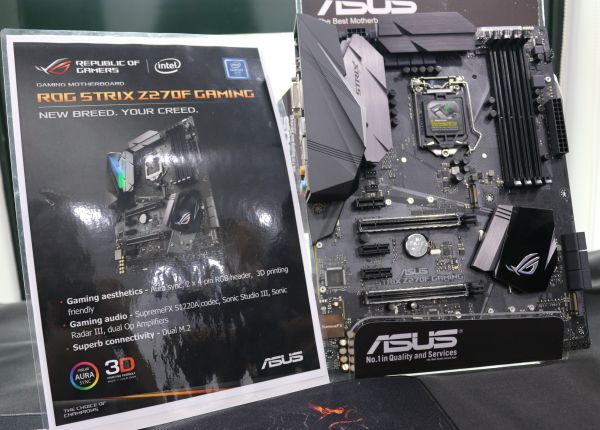 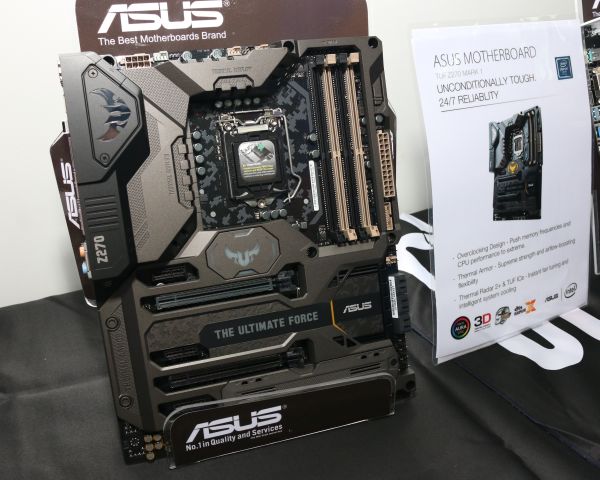 One lineup that we're very surprise to see making a comeback is ASUS’ TUF series motherboards. Short for The Ultimate Force, this lineup was actually the first of all ASUS’ motherboard lineup to feature the whole 'Armor' look and design across the board. 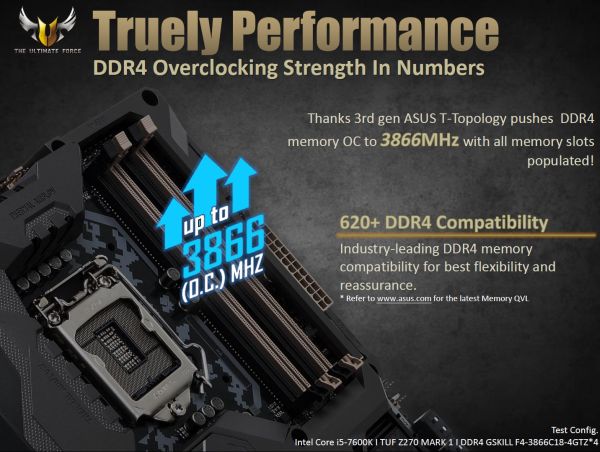 The new Z270 TUF series, of course, has been updated since then. For starters, these motherboards now have support for DDR4 memory with frequencies of up to 3,866MHz. They also have the ASUS PRO Clock technology, granting users a more stable voltage control, ultimately granting users the ability to overclock Intel’s new Kabylake CPUs even harder than most other motherboards on the market. 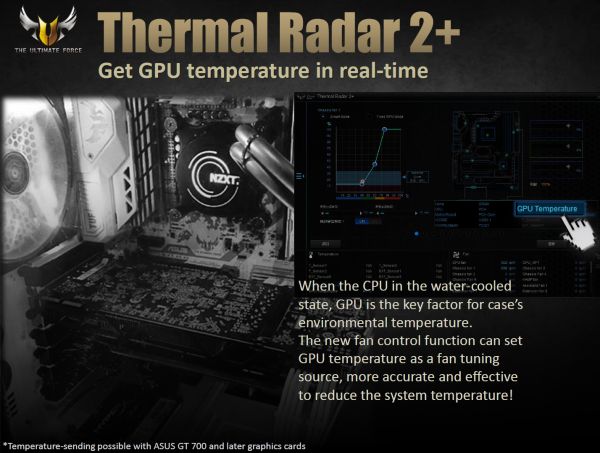 Users can also view their GPU temperature in real-time now, thanks to the built-in Thermal Radar+ function and feature. This means that users won’t have to download third-party software like GPU-Z in order to view the temperature of their graphics card.

Last but not least, all motherboards under the TUF series are fitted with ASUS’ Aura Sync lighting.

The Z270 TUF series will be available in two variants: Mark I and Mark II. Below are the specifications for both motherboards. 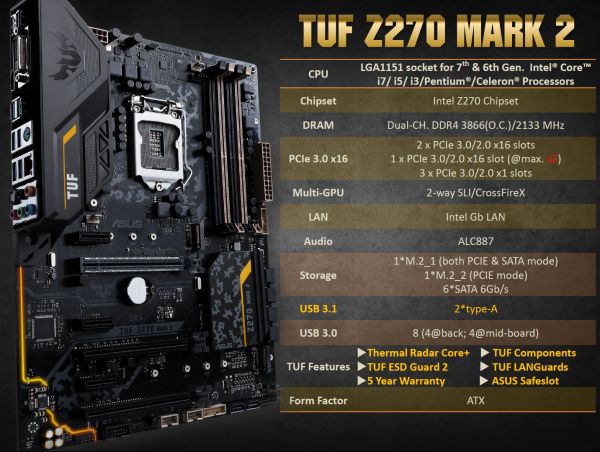 If you’re just looking for a standard performing motherboard with a minimal desire of overclocking your CPU beyond what is technologically possible, then ASUS’ Prime series motherboards are for you. These are motherboards are designed for mainstream consumers. 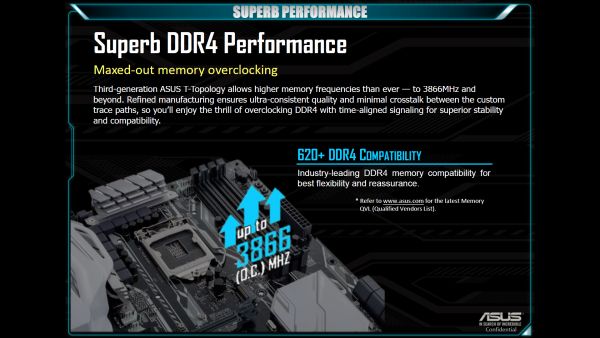 ASUS’ Z270 Prime series can be split into two variants: the Z270A and the Z270AR. While the Prime series is not for overclockers in general, the series is by no means lacking in features. The motherboards under these series are able to support DDR4 memory with clock speed as high as 3,866MHz, and on top of that, they’re also Intel Optane Memory ready.

Adding on to those features is the support for dual M.2 SATA SSDs with data-transfer speeds of up to 32GB/s, and it can even do so in a PCIe RAID format.

The motherboards are also fitted with ASUS’ Crystal Sound 3 built-in audio card, and has support for DTS Headphone-X, giving users yet another level of audio immersion. 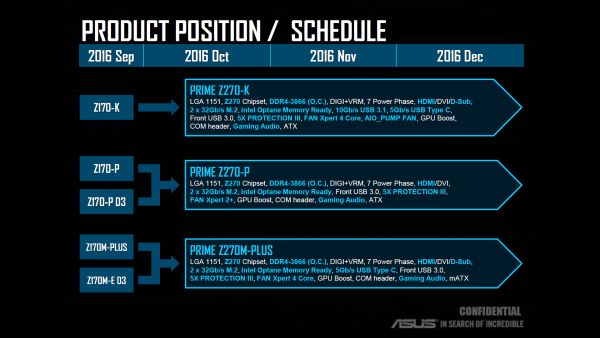 As an extra added bonus, the PCIe slots of all Z270 Prime motherboards have been fortified with Solid Soldering, so that they don’t get damaged over long periods of time with heavy high-end graphics cards that are fitted with massive heatsinks and cooling fans. 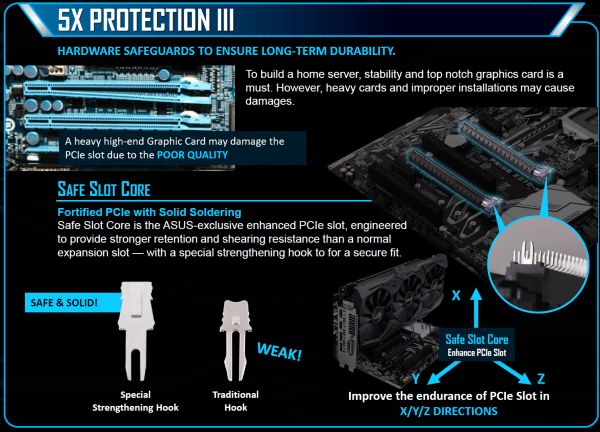 To recap, these are the new Z270 motherboards that ASUS will be bringing to Singapore: 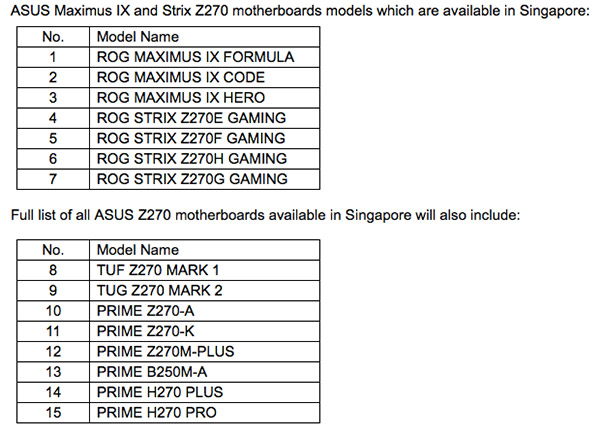 Join HWZ's Telegram channel here and catch all the latest tech news!
Our articles may contain affiliate links. If you buy through these links, we may earn a small commission.
Previous Story
Zotac readies Kaby Lake mini PC and new external graphics dock for CES 2017
Next Story
Qualcomm’s Snapdragon 835 chip will enable faster and thinner phones that are ready for VR