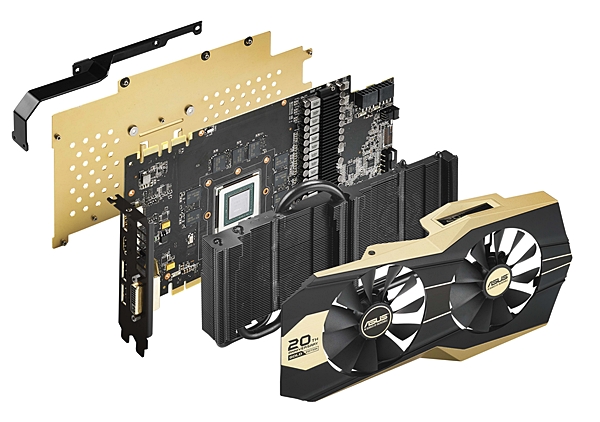 ASUS has unveiled its 20th anniversary gold edition GTX 980 graphics card. Its Maxwell-based GM204 GPU has been overclocked to 1317MHz, with a boost clock speed of 1431MHz. Its 4GB of GDDR5 video memory remains at the default 7010MHz clock speed. In comparison, the reference NVIDIA GeForce GTX 980 s rated to operate at 1126MHz, and has a boost clock speed of 1216MHz. 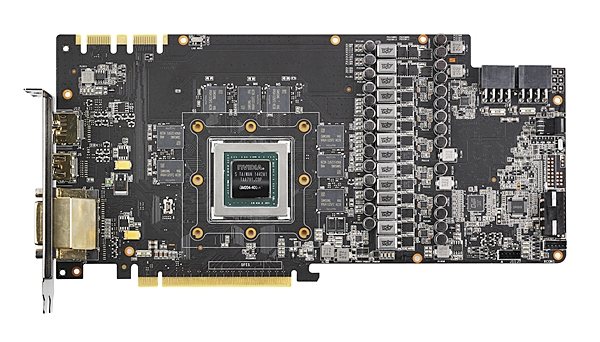 The card’s aggressive OC state leverages on its 14-phase Digi+ VRM power system. Its customized PCB appears overextended in order to accommodate the VRM components that include Japanese-made 10K black capacitors. For extreme overclockers, its Memory Defroster is touted to prevent frost from forming over its memory modules during subzero cooling. This feature is controlled by a DIP switch. There’s also a Safe Mode button to put things back in their original order. 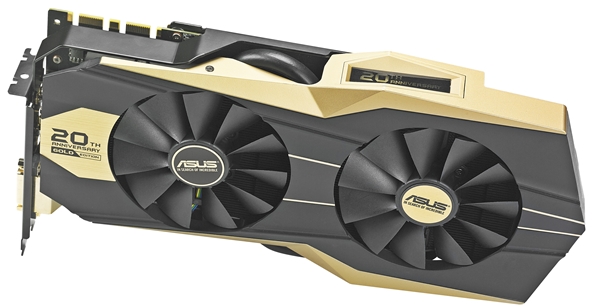 The card features the DirectCU II cooling system. A matte black coating has been applied to its finstack; while portions of its fan shroud have been painted gold. The gilded treatment also extends to its metal backplate. Also, the fan shroud features a LED that changes color to reflect the operating load of the card. Readers will be glad to know that the commemorative gold card comes with a limited 3-year warranty. The card will be on sale very soon; so do stay tuned for its pricing details!

Join HWZ's Telegram channel here and catch all the latest tech news!
Our articles may contain affiliate links. If you buy through these links, we may earn a small commission.
Previous Story
Three years after launch, Lazada Group hits US$1 billion in annualized GMV
Next Story
HP's Omen has a beefier bigger brother, the HP Omen Pro