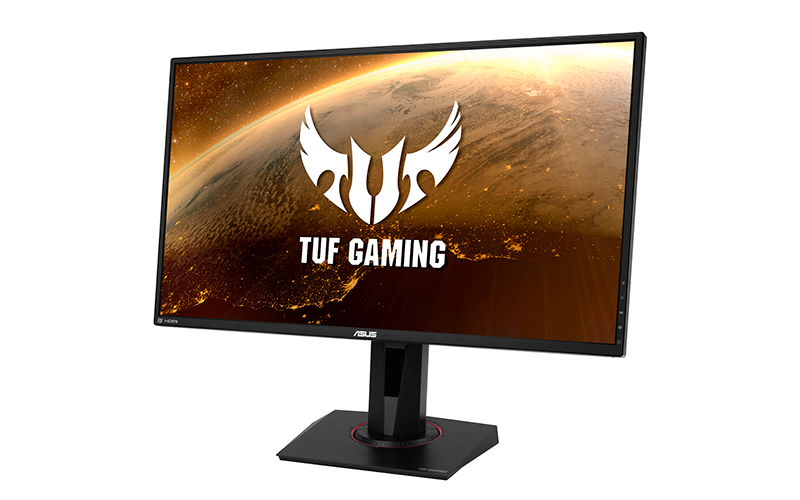 ELMB Sync uses both motion blur reduction techniques and adaptive sync together, so you get clear images and smooth, judder-free movement. According to ASUS, your graphics card should be able to push at least 85FPS for the technology to be most effective. This is because ELMB Sync uses a black frame insertion technique that depends on the effective frame rate.

One of the more interesting models is the TUF Gaming VG27BQ, a 27-inch screen with a super low response time of just 0.4ms. It joins the likes of other monitors that have posted similarly speedy response times, such as AOC's new AGON AG271FZ2 and AG251FZ2 and the Acer Predator XN253Q X.

While IPS panels have become quite competitive in terms of response times, such sub-millisecond timings still require a TN panel. The TUF Gaming VG27BQ features a 2,560 x 1,440-pixel TN screen that supports an adaptive refresh rate of between 48Hz and 165Hz. Together with the ELMB Sync tech, ASUS says the monitor should perform very well in terms of reducing motion blur and delivering crisp images.

The low response times will probably appeal to gamers looking to minimise input delay, although it's still very much up in the air as to whether or not you'll be able to tell the difference.

Then there's the TUF Gaming VG27AQ, the IPS panel version of the VG27BQ. It is certified by NVIDIA as a G-Sync Compatible monitor, so you'll also be able to take advantage of some of the benefits of G-Sync. Compared to its TN equivalent, the IPS panel should provide better colours and viewing angles. It also covers 99 per cent of the sRGB colour space and supports up to a 165Hz refresh rate over DisplayPort after overclocking. Finally, the TUF Gaming VG32VQ is the largest of the lot at 31.5 inches. It also has a 1800R curvature for a more immersive experience and features a 2,560 x 1,440-pixel VA screen. The 144Hz refresh rate should provide a smooth and fluid gaming experience, but like the other screens here, it's probably best paired with a GPU that can take full advantage of it.

Here's an overview of their launch pricing at COMEX:

The monitors are also be available on Lazada and Shopee.

Join HWZ's Telegram channel here and catch all the latest tech news!
Our articles may contain affiliate links. If you buy through these links, we may earn a small commission.
Previous Story
A 40-minute Nintendo Direct for September 2019 has been announced
Next Story
PRISM+ drops a slew of new ultrawide, curved gaming monitors