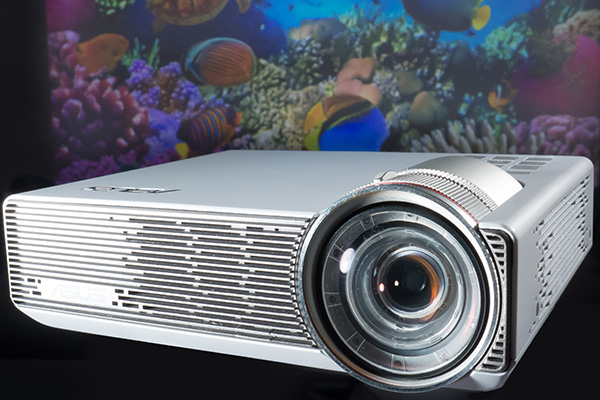 Last year, we reviewed the ASUS P2B portable LED projector, and found it to be a capable little beamer for the traveling professional. At CES 2015, we saw the P3B, which is ASUS’ newest portable, battery-powered short-throw projector.

Featuring an LED light source with a 30,000-hour lifespan, the P3B once again has an HD resolution of 1,280 x 800 pixels, but with an improved maximum brightness of 700 lumens. It also sports a 0.8:1 short-throw lens, allowing it to project a 58-inch (diagonal) image at just a meter away from the screen.

The ASUS P3B also works with ASUS Wi-Fi Projection, which is an app that allows you to wirelessly project and stream content on your mobile devices over a Wi-Fi network. Presentations can be conducted sans a PC too, as the projector sports digital video inputs like HDMI/MHL (Mobile High-Definition Link). The MHL port can even be used to charge connected MHL-enabled smartphones and tablets while they’re projecting. But that’s not all. The P3B is also a 12,000mAh power bank!

For something brighter, check out the ASUS B1MR wireless DLP projector that has a maximum brightness of 900 lumens. Native resolution for this projector is still pegged at 1,280 x 800 pixels, and like the P2B, it supports ASUS Wi-Fi Projection for wireless presentations and media streaming. It also doesn't need to be tethered to a PC, thanks to its multi-format file compatibility and integrated SD card reader and USB port. The B1MR also comes with a built-in 2W ASUS SonicMaster speaker.

Join HWZ's Telegram channel here and catch all the latest tech news!
Our articles may contain affiliate links. If you buy through these links, we may earn a small commission.
Previous Story
Xiaomi to announce 5.7-inch Redmi Note 2 on January 15?
Next Story
HP jumps on the 5K and ultra widescreen monitor bandwagon