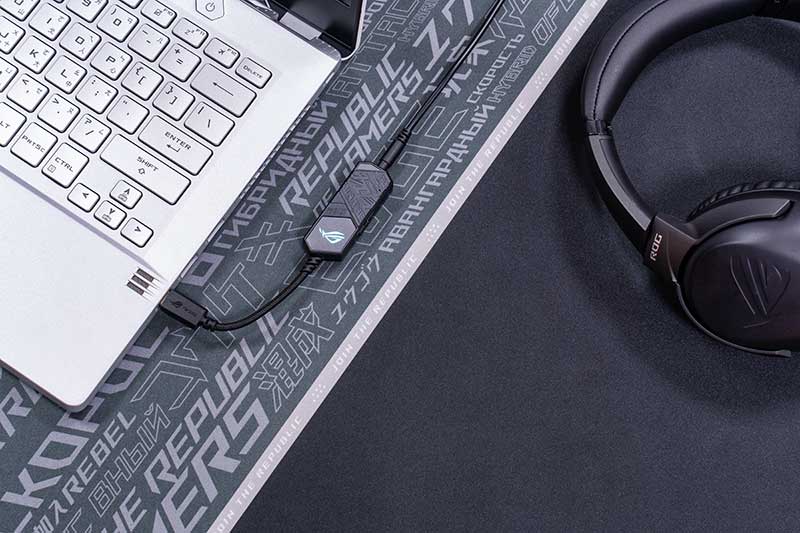 ASUS ROG has released a new audio accessory for the discerning niche of audiophile gamers: the ROG Clavis USB DAC.

The Clavis is the company's first offering in the pool of small USB DACs and is powered by an ESS 9281 QUAD DAC with an integrated amplifier. The ‘QUAD’ naming refers to the four DACs in the 9281, each dedicated to the lows, mids, highs and ultra-highs of the audio frequency range.

Speaking of which, the ESS 9281 also brings with it support for Master Quality Authenticated (or MQA) audio files - a format that aims to deliver high-resolution audio at smaller file sizes.

The Clavis also has some interesting measures for lowering its noise floor. ASUS claims that this was achieved through what it calls Hyper-Grounding technology, which utilises a multi-layered PCB with a special layout designed to reduce noise from electrical interference. The Clavis also supports inline microphones that comes with AI-noise cancellation for clearer input quality. Then there's the Strix Go BT, a wireless headset for PC, mobile devices, PlayStation 5 and the Nintendo Switch. A successor to the Strix Go 2.4, the new headset has a few upgrades going for it including, as you can probably tell from the name, Bluetooth 5.0 as well as active noise cancellation, support for aptX Adaptive audio codec. It also uses hidden mics, doing away with a detachable boom mic that its predecessor used, which features ASUS's Ai noise-canceling microphone technology, as well as support for Hi-Res audio. The Strix Go BT and Clavis are available for S$399 and S$189 respectively on ASUS's Lazada store and distributor Ban Leong's E-store (restock coming in October). The Clavis' price puts it on par with other small USB DAC offerings such as AudioQuest's Dragonfly Black and Astell & Kern's USB-C Dual DAC, which also retail at around the S$200 range.

Join HWZ's Telegram channel here and catch all the latest tech news!
Our articles may contain affiliate links. If you buy through these links, we may earn a small commission.
Previous Story
Belkin's ScreenForce screen protectors have been updated for the new iPhone 13
Next Story
Valve has rolled out a handy FAQ page for the upcoming Steam Deck