The ROG Zephyrus M16 is the content creator's dream 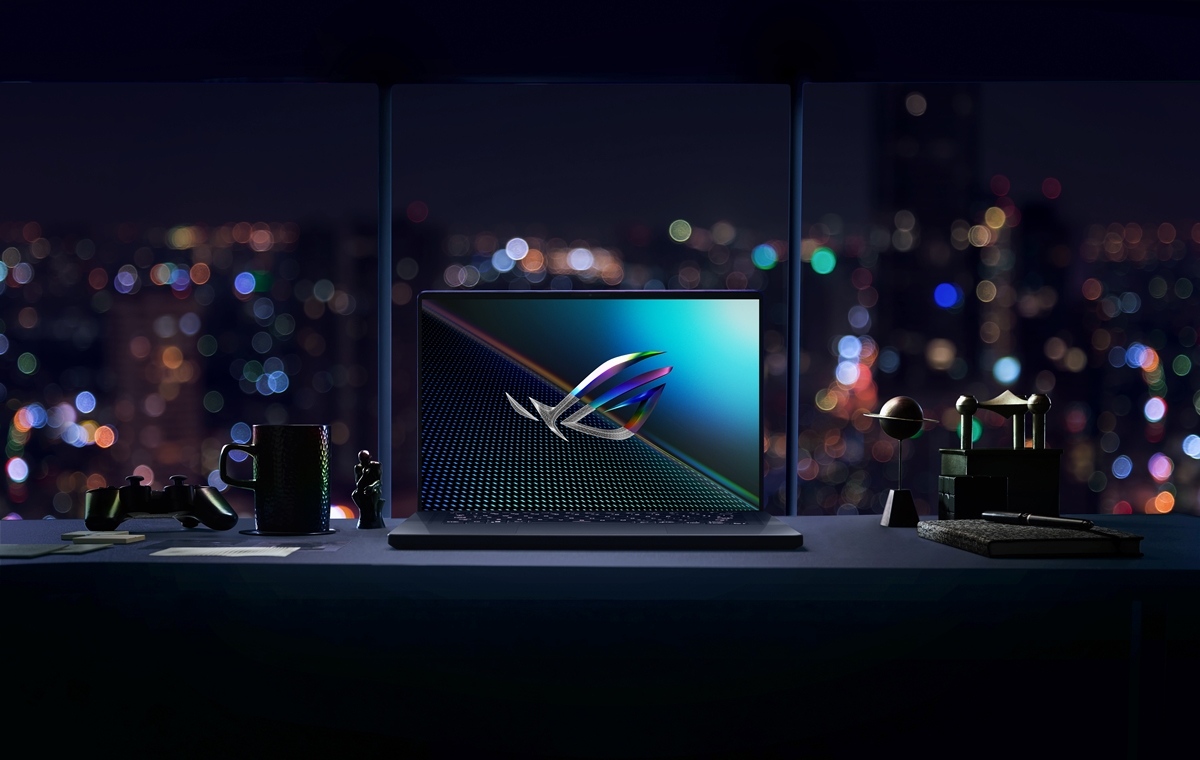 With the festive season just over the horizon, it probably goes without saying that like everyone else, you’re looking forward to some well-deserved R&R. It’s going to be absolutely blissful; you think to yourself. No work, no deadlines - it’s just going to be you doing whatever floats your boat, so perhaps you could try your hand at video editing.
But if that’s on your to-do list, the next question is if your notebook will be able to support your new hobby. Even if it doesn’t, there’s no need for you to dig through the mind-boggling list of options online, because we just so happen to have a great recommendation from ASUS Republic of Gamers - the all-new ROG Zephyrus M16 notebook.

It’s highly versatile with an excellent display and graphics

Straight off the bat, we can assure you that you won’t be wanting for versatility. The ROG Zephyrus M16 is a fantastic notebook that’s perfect for content creation and gaming. One of the reasons for that is its gorgeous display. A lot of things come together to make this a great inclusion, and right at the top of that list is the WQHD (2,560 x 1,440 pixels) resolution, 165Hz refresh rate, 3ms response time, PANTONE Validated display.

Among other benefits, this allows you to enjoy high framerates with minimal input lag in the heat of battle, not to mention that the 500 nits bright and 1200:1 contrast ratio display has also been factory-calibrated to ensure true colour accuracy. Adaptive-Sync technology is also present to prevent screen stuttering or tearing thanks to the GPU’s framerate syncing up with this display’s refresh rate. The end results? Buttery smooth visuals across the board, whether it’s for high frame rate videos or attacking your foes on a first-person shooter game. 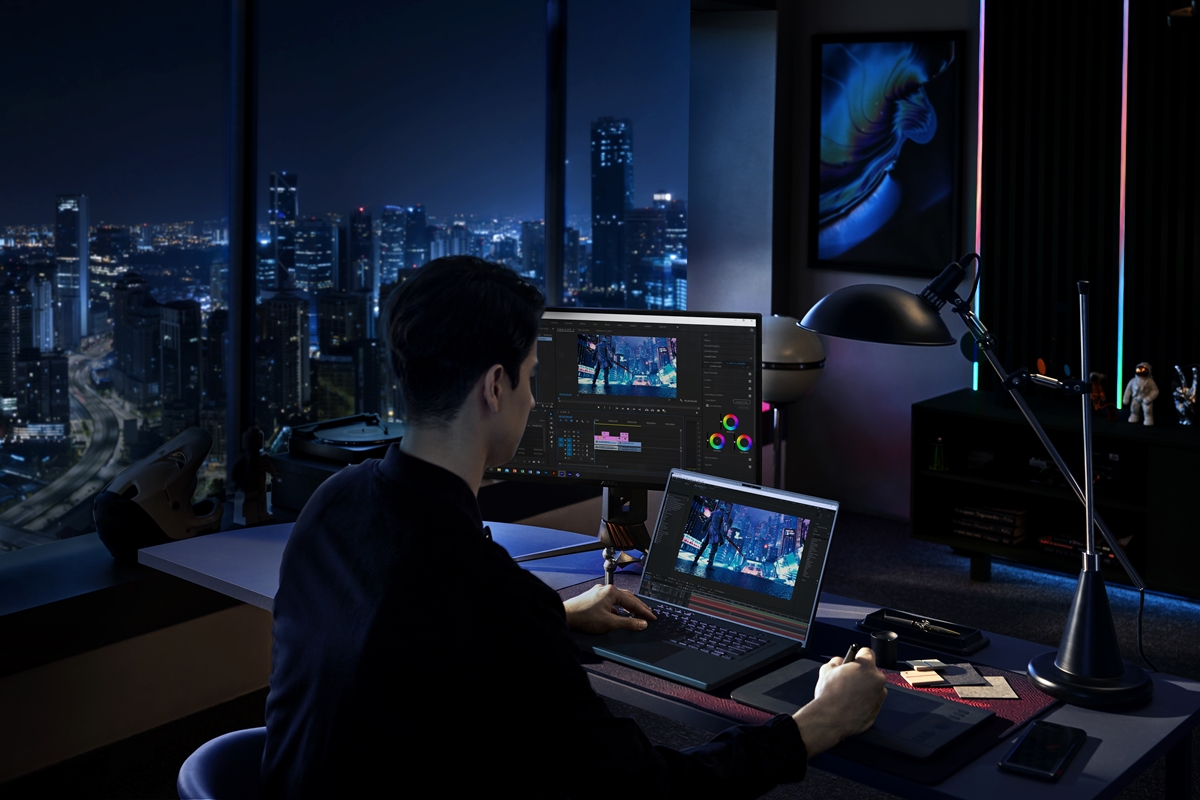 Content creators will also be able to see their work in the richest possible colours too, thanks to Dolby Vision Technology tweaking imagery for maximum immersion. In addition, the notebook’s display also features 100% DCI-P3 colour gamut support and this ensures that content creators - whether they’re working with moving film or still images - can take their work to all-new heights of realistic visual fidelity and colour accuracy.
As for screen real estate, rest assured that you’ll be getting your money’s worth and then some. After all, this notebook manages to fit 16 inches of screen space on a traditional 15-inch frame, with an ultra-slim chassis to boot, making it up to 5% smaller and lighter than its predecessors. On top of that, if you’re often disappointed by notebooks that won’t bend the way you want them to, the Zephyrus M16 has you covered. Its 180-degree ErgoLift hinge allows users to flip the display to lie flat on its back, so you can easily find the perfect display angle anytime and anywhere, as well as to easily conduct small collaboration sessions effortlessly. Check out our hands-on experience article for more photos and inputs. 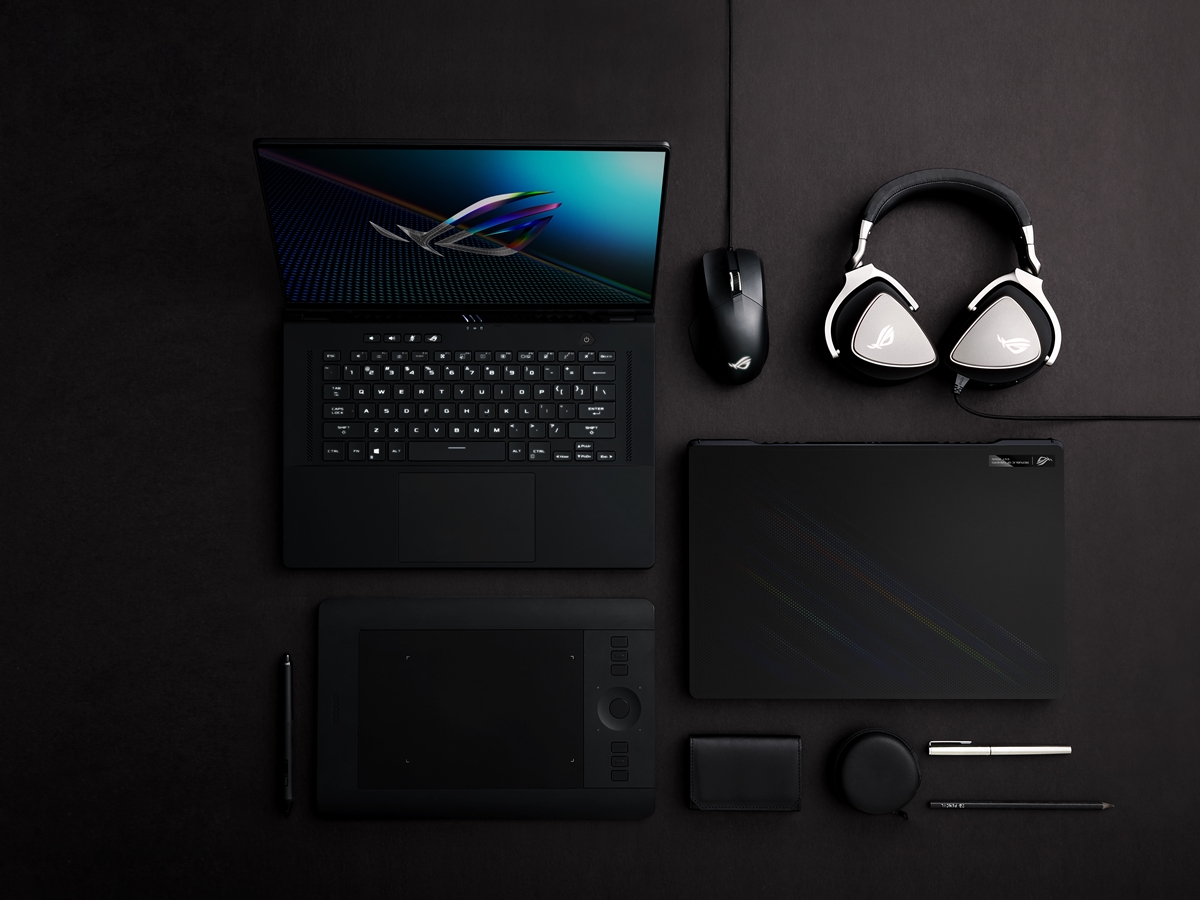 Of course, what good is a powerful display without an equally powerful processor and GPU to match? Sporting a blisteringly fast and powerful Intel Core i7-11800H octa-core processor and can tackle up to 16 processing threads simultaneously from base clock speeds of 2.3GHz up to 4.6GHz in Turbo Boost mode. Coupled with an NVIDIA GeForce RTX 3070 GPU, the Zephyrus M16 is equipped to handle the most demanding games and even content creation tasks with ease.

For example, you can throw in GPU-accelerated effects in Adobe Premiere Pro and Adobe After Effects to edit your videos with ease, fast-track the rendering time, and even keep your subject matter focussed with auto-reframe and AI assistance offered by the NVIDIA GPU.
Even if you’re not doing video editing work, the discrete GPU helps you edit process your photos faster by taking advantage of GPU-accelerated filters and enhancing your photos through GPU-accelerated AI in Adobe Photoshop and Photoshop Lightroom. This might not sound like much but given that a lot of content creation tasks are now geared towards higher resolution 4K screens as opposed to 1080p, the processing requirements are a lot higher than they once were and a capable discrete GPU with a lot of muscle and a stable, well-tested driver set like NVIDIA’s Studio Drivers are critical in enabling digital artists and creators to get their jobs done reliably. 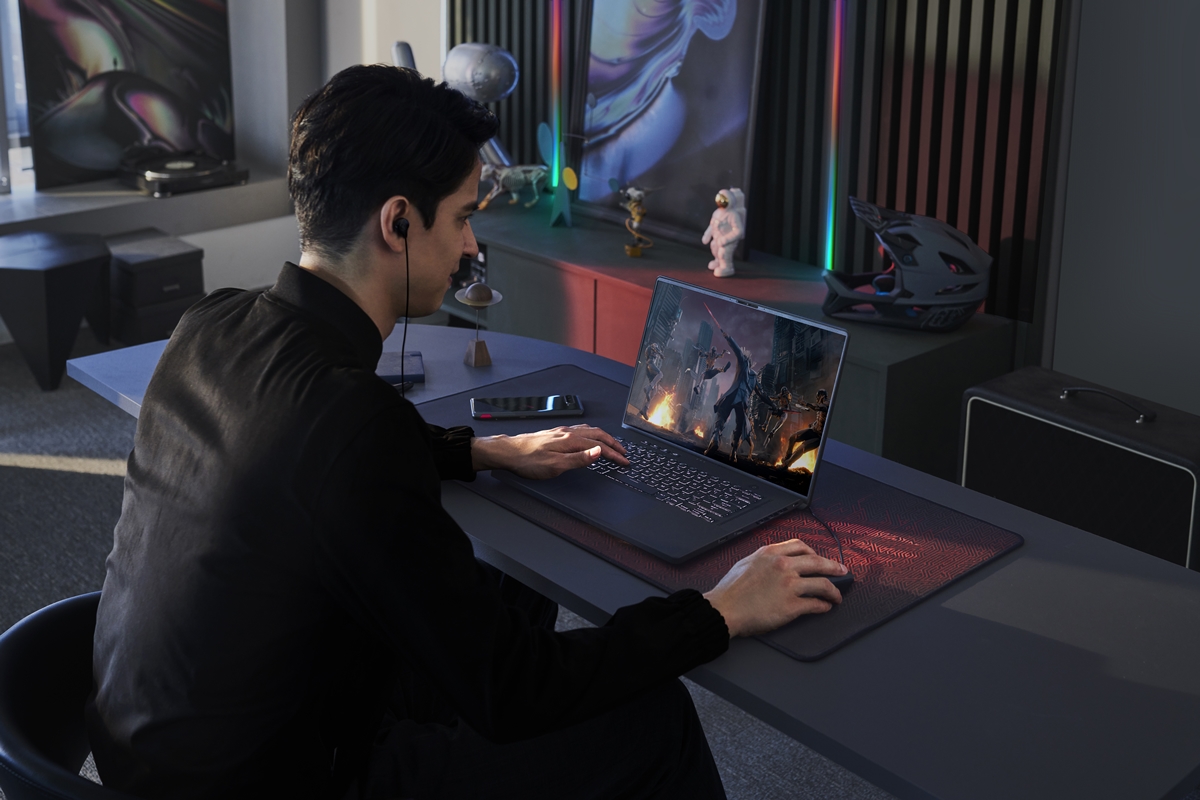 So, whether you’re blitzing through the entire Peaky Blinders saga on Netflix or editing a new digital art piece to share with the community, the Zephyrus M16 will ensure you spend as much time as possible getting the important stuff done.
3D content creators too naturally stand to benefit from Blender 3.0 where a more responsive viewport, better shadow representation and an overhauled renderer to maximize performance from NVIDIA GeForce RTX GPUs for NVIDIA OptiX ray tracing and AI denoising. If you’re using game development tools that involve the Unreal or Unity engine, a powerful GPU is no doubt your best companion to take advantage of the new hardware features, as well as develop content for your intended audience more accurately. And after a hard day’s work, you get to enjoy a great gaming session too.

Impressive cooling for an impressive notebook

But as we’re chilling out enjoying our favourite media or working on new content for fans, it’s imperative that the notebook stays cool as well. You could have the spiciest material lined up, and all of it would still go to waste if the notebook simply goes belly up at every turn. That’s where ASUS’ multi-faceted Intelligent Cooling philosophy comes into play. 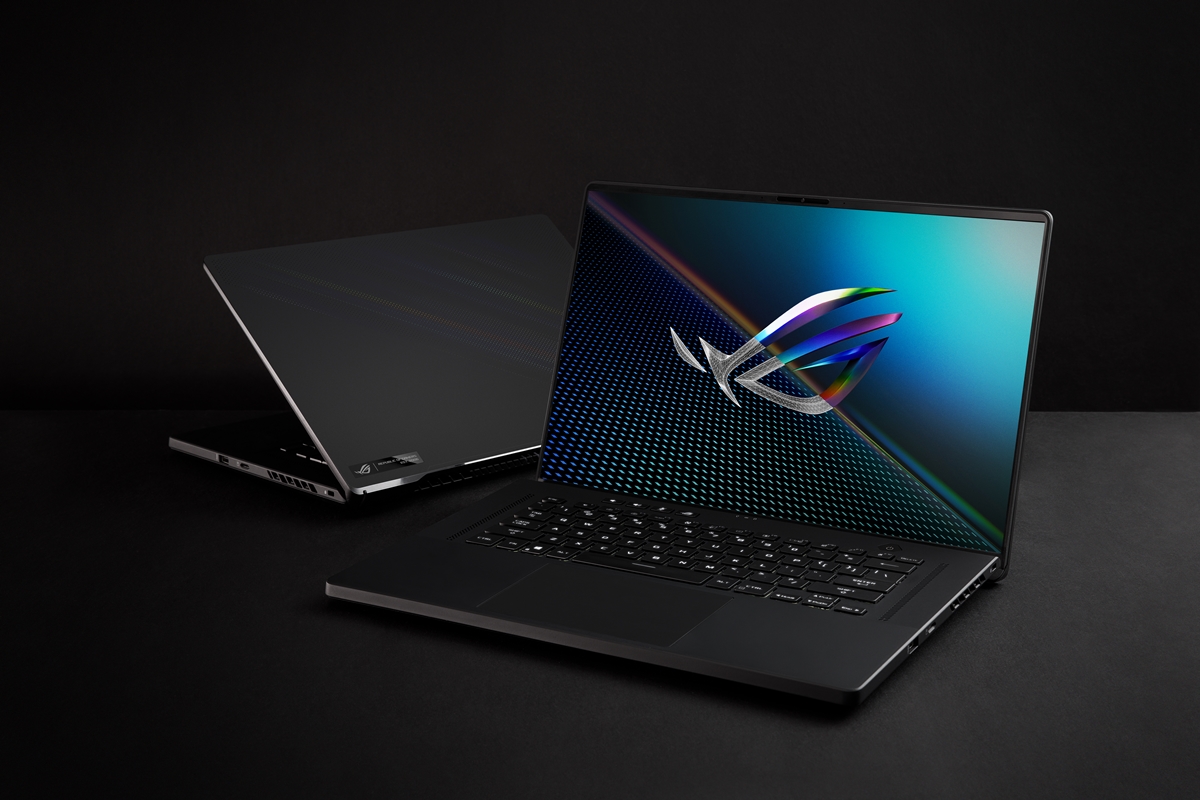 Specifically, the Zephyrus M16’s CPU is kept up to 10 degrees Celsius cooler (according to ASUS) than many other notebooks with the Thermal Grizzly liquid metal compound, which offers significantly better heat dissipation compared to conventional thermal paste options. This compound is then fenced in with specially-made implements, and ROG has even managed to automate the entire cooling process too, keeping your notebook cool and crisp at all times without any user intervention.
Meanwhile, a customised self-cleaning thermal module prevents dust from clogging up the notebook’s internal machinery, ensuring better longevity and stability, while powerful Arc Flow fans provide immense airflow while reducing turbulence and noise. 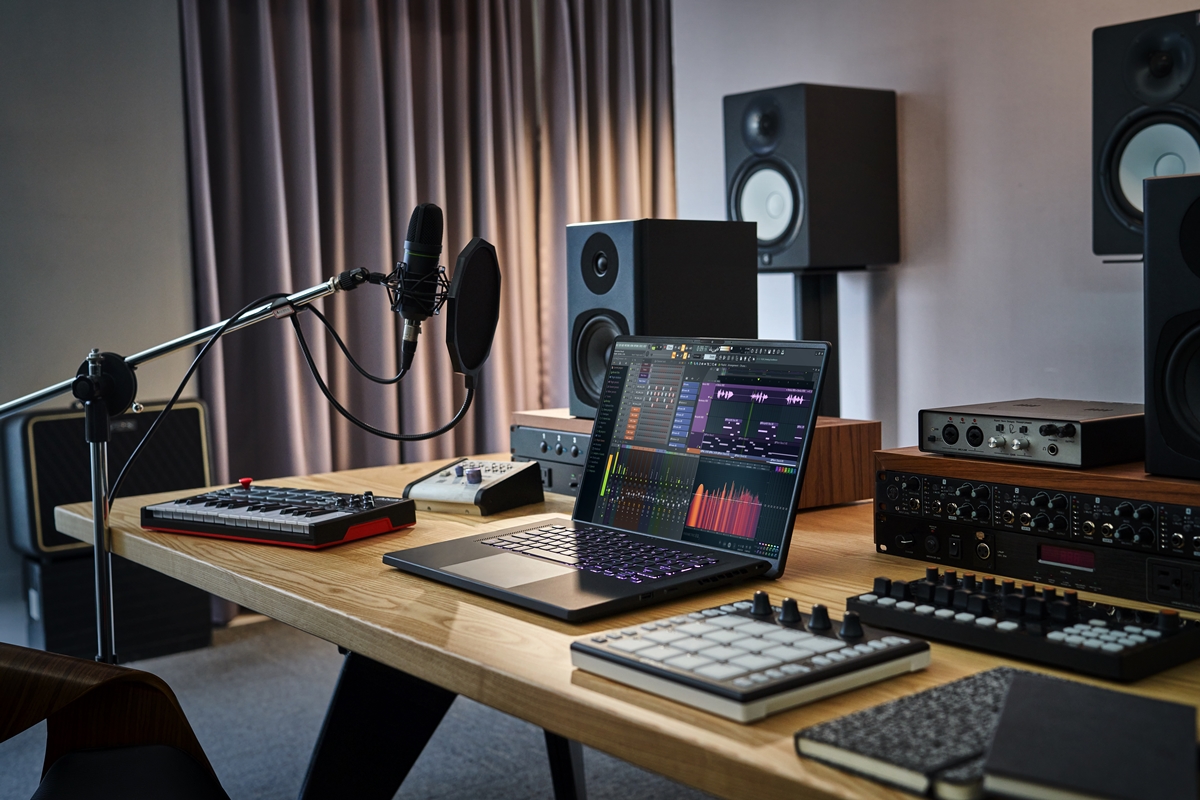 Speaking of sounds, one of the Zephyrus M16’s other claims to fame is its amazing audio subsystem. As the official description reads, you’ll be able to “sink into sublime sound” with the notebook’s powerful combination of six Dolby Atmos compatible speakers with dual force-cancelling woofers, balanced acoustics and even a Hi-Res audio certification that promises top-of-the-line audio fidelity for any and all sorts of media.
YouTube creators can also look forward to the notebook’s 3D microphone array and coupled with NVIDIA’s Broadcast software to leverage on the GPU’s AI prowess, you get a boost in ambient noise removal features thanks to AI-powered noise cancellation in popular streaming applications. This is tremendously helpful as poor voice reception or disruptive environmental noise can ruin the vibe of a good video or live streaming session.

Get the job done anywhere, anytime 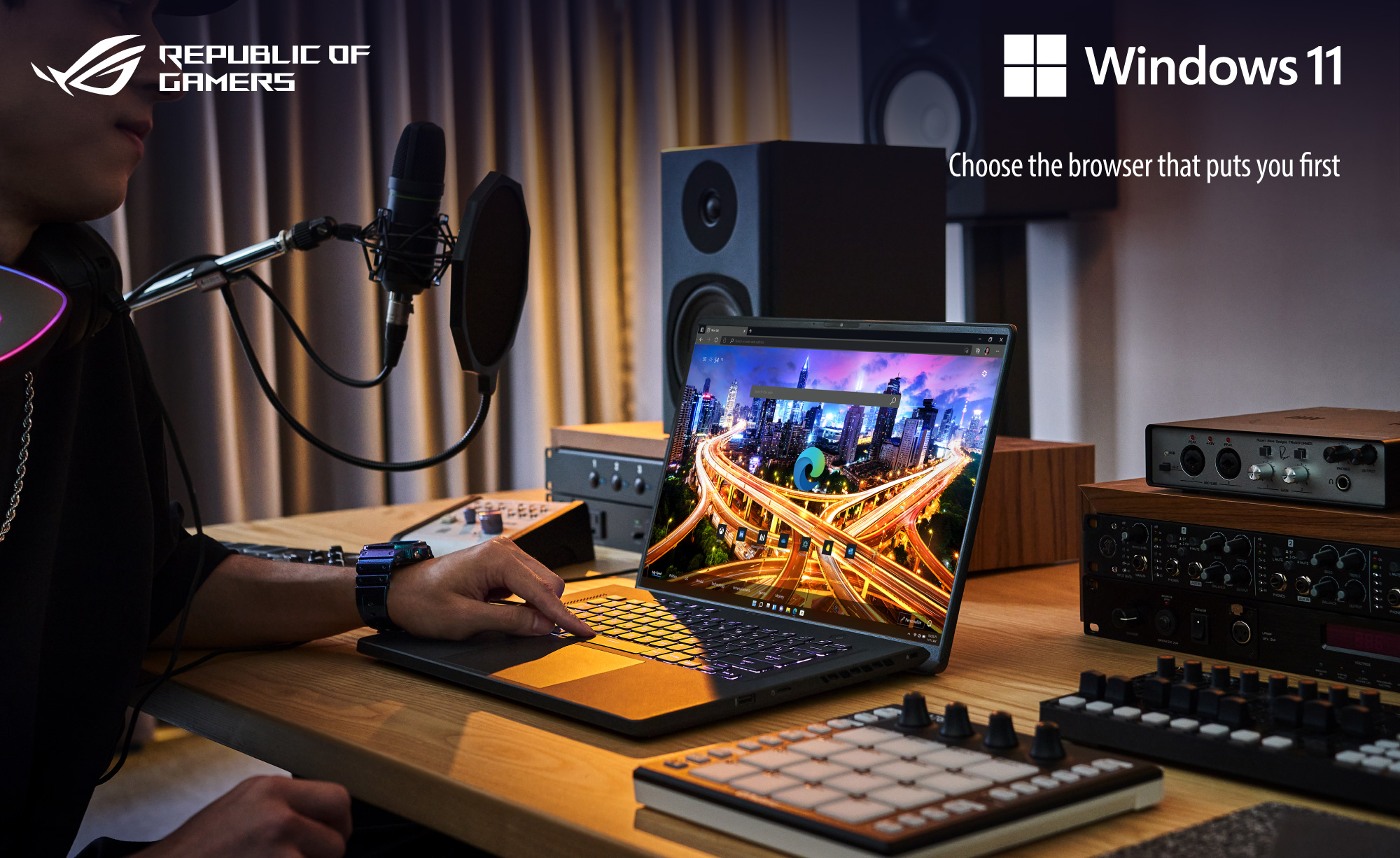 Finally, for our content creator buddies, we know you’re concerned about much more than just graphics, processors and cooling - you’re also thinking about accessibility and connectivity. After all, makers are artists too, and you’ll need something that’s able to help you seize those fleeting flashes of inspiration whenever and wherever they might strike. But fear not, because the ROG team has you covered.
The Zephyrus M16 also comes with a tidy spread of ports to help with that. It features an ultra-versatile Thunderbolt 4 port with DisplayPort 1.4 and Power Delivery 3.0, as well as three USB 3.2 Type-A ports for users to connect mice, headsets and keyboards if need be. As the cherry on top, a microSD slot offers an avenue for photo and videographers to quickly download captured shots and get down to editing.
At this juncture, there are no buts about it. When the Zephyrus M16’s whole package is taken in its entirety, it is like a beautifully painted portrait, where all the individual aspects complement each other flawlessly. Powerful internals and graphics features blend perfectly with impressive cooling capabilities, while the notebook’s 1.9kg lightweight frame lines up nicely with its spread of connectivity options. Make no mistake, this portable but immensely capable notebook promises excellent performance and user experiences, perhaps even more so for content creators and gamers, who will certainly be able to get the most out of its versatility.
The Republic of Gamers Zephyrus M16 notebook is now retailing for S$3,798. Find out even more about it on the official product page.
Our articles may contain affiliate links. If you buy through these links, we may earn a small commission.
Previous Story
Sharp launches two 4K resolution Android TVs with 1-for-1 exchange assurance
Next Story
Understand HDMI 2.1? Well CES 2022 will be bringing you yet another new standard