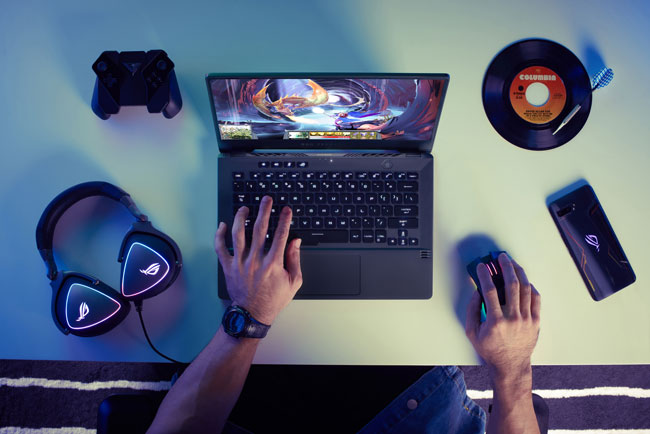 There is no shortage of slim 13-inch and light 15-inch gaming notebooks today, but that description has always been relative to the glut of chunky designs that have defined gaming laptops in previous years. What if a 15-inch one is still too large for you, or a tiny 13-inch is a tad too cramped for your liking?

Enter the ROG Zephyrus G14, which is a svelte-looking 14-inch gaming ultrabook that comes equipped with up to NVIDIA’s GeForce RTX 2060 GPU and AMD’s latest and powerful Ryzen 4000-series mobile processor. This baby assassin is packed with plenty of firepower.

Here are five reasons why it should be your next gaming notebook.

14 is truly the new inch; the ROG Zephyrus G14 is only 17.9mm thin and weighs just 1.7kg. The smaller footprint means the gaming notebook can easily slip into conventional laptop bags and backpacks. If you would associate ‘thin and light’ with ‘fragile’, the Zephyrus G14 will surprise you. To keep the notebook light and strong, honeycomb reinforcements beneath the palm rest add strength with minimal extra material.

Its deck is also made of magnesium-aluminium alloy and is precisely machined and fingerprint resistant for a professional polish – yes, a gaming notebook need not have to look embarrassingly out of place in a business meeting or a hippy café. The lid and its distinctive dot matrix design, on the other hand, is crafted out of aluminium by a CNC milling process that puts 6,536 precise perforations on the exterior panel.

Which brings us to the next reason below.

You can do very cool LED personalisations on the lid ROG called it the AniMe Matrix (Neo will be so proud) display, and it uses 1,215 mini LEDs to give gamers a new medium to express their individuality. Each LED emits a white glow with 256 levels of brightness control. You can simply import animated GIFs and other graphics, or get your creative juice going by building custom animations frame by frame. These visualisations also react to music and other audio sources, creating a unique platform for content creators including DJs and other artists.

The AniMe Matrix display is unique to the ROG Zephyrus G14 and it did not come easy. ROG took 15 iterations alone to create the mask that evenly distributes light from each LED. The alignment of this diffusing layer must be perfect to get the ideal effect, especially since the individual lights are rectangular rather than square. And do not worry, ROG engineers were also careful to balance the number of mini LEDs to minimize heat, and power consumption. It is not all just looks. The ROG Zephyrus G14 is packed with plenty of firepower inside to get you through most games such as Riot Games’ recently launched Valorant and of course, Epic Games’ Fortnite. The discrete GPU of choice here is the NVIDIA GeForce RTX 2060, but budget-conscious gamers can opt for the more subtle GeForce GTX 1650 Ti option as well. Both graphics processors are based on the NVIDIA Turing architecture, which melds dedicated cores for programmable shading, real-time ray tracing and artificial intelligence. Turing’s dedicated video encoder also gives the Zephyrus G14 ability to game and stream simultaneously and is compatible with Open Broadcaster Software (OBS), a popular capture tool among creators and streamers.

For display, the gaming notebook’s IPS-type panel is not only factory calibrated and PANTONE Validated but also equipped with a high refresh rate Full HD display that goes up to 120Hz, so games will look and feel smoother. The Zephyrus G14 breaks the trend where smaller laptop screens are not generally available with higher refresh rates, but ROG has worked closely with its panel providers to create new 14-inch displays capable of keeping up.

Also unique and a first to the ROG Zephyrus G14 is a special 8-core AMD Ryzen 7 4800HS processor that empowers it to meet demanding workloads, such as video editing, 3D rendering, and even heavy multitasking like gaming and streaming simultaneously thanks to its ability to crunch up to 16 processing threads. 16GB of fast DDR4-3200 RAM across dual channels also means there is enough headroom for bigger projects too, and the 1TB NVMe SSD offers minimal load times for a huge library of games and apps. 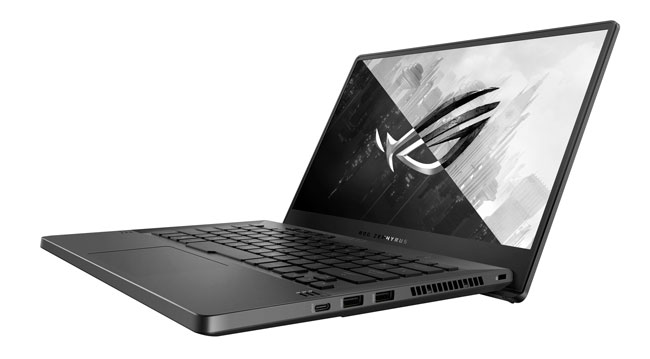 Packing this much power inside an ultra slim chassis leave little room for airflow, and a smaller footprint makes a gaming notebook like the ROG Zephyrus G14 even harder to keep cool. That is where the ErgoLift hinge comes in. This hinge cleverly tilts the keyboard at a more comfortable angle. The bottom of the display lifts the back of the machine when the lid is opened, giving the vents in the base more room to breathe. Even the rear exhausts and heatsink fins are shaped to direct air both up, away from the bezel, and down, towards the vents cut into it. This ensures a better airflow to cool the system. The Zephyrus G14 is also equipped with ROG’s Intelligent Cooling system that automatically enables Silent mode for quiet operation.

Dolby Atmos is an unfair advantage

A leap forward from surround sound, Dolby Atmos provides a competitive advantage for gamers by bringing moving audio that flows above and around you with crisper voice and greater depth. In the ROG Zephyrus G14, Dolby Atmos enhances spatial immersion by delivering a breakthrough audio experience with sound that moves all around you in three-dimensional space whether listening via headphones or built-in speakers. Dolby Atmos technology for notebooks also helps recreate realism with optimized audio for greater detail and maximises loudness without distortion from the notebook’s integrated speakers. There are two tweeters positioned above the keyboard that fire high-frequency audio directly toward you, while two woofers beneath them focus on lower registers to fulfil a hearty mid-range and bass notes that are amplified by the above-mentioned ErgoLift design. This quad-speaker setup delivers perfectly balanced audio be it for movies, music or games without losing clarity or detail.

For real-world experiential findings, we have a performance preview article here, when we first test drove an engineering unit.