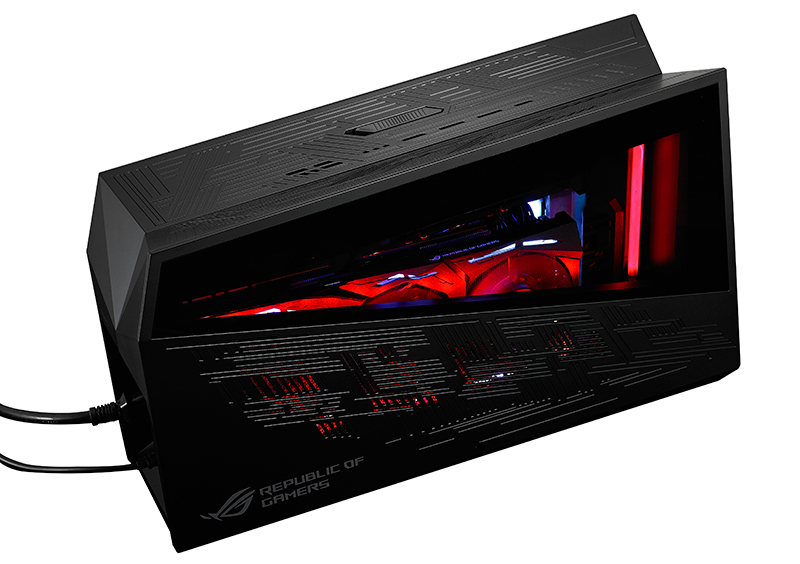 ASUS has announced the local launch of the ROG XG Station 2, its new external graphics dock that can turn a laptop or 2-in-1 notebook into a graphics powerhouse. The best part is that it uses a Thunderbolt 3 connector, so it will work with any notebook that supports the standard and use of external GPUs through the BIOS.

An earlier iteration of the XG Station 2 was showcased at the start of 2016, but that featured a proprietary interface in the form of two USB-C cables with up to 32Gb/s of bandwidth.

However, the intervening period saw the roll out of the Thunderbolt 3 Razer Core dock and AMD’s XConnect standard, and it looks like ASUS has decided that the Thunderbolt 3 specification is good enough after all. Still, you shouldn't expect desktop-level performance as you'll still find yourself limited by the CPU.

The XG Station 2 now features plug-and-play functionality and can be connected or disconnected without needing to restart your laptop. The Thunderbolt 3 specification offers up to 40Gb/s of bandwidth, and the dock is fitted with an 80 Plus Gold certified 680 watt power supply that can take the latest AMD and NVIDIA GPUs (AMD Radeon R9 series and NVIDIA GeForce GTX 9-series or later).

Not all 600 watts will go to the GPU however, and the dock will supply up to 500 watts to the GPU and 100 watts to charge your laptop and other USB-connected devices. It will accommodate 2.5 slot cards up to 312mm, which should mean just about any card moving forward.

The XG Station 2 itself is equipped with four USB 3.0 ports, a Gigabit Ethernet port, and even a USB Type-B port. The exterior of the dock is adorned with Mayan-inspired patterns like on ASUS’ desktops, and a side window shows off a plasma tube and interior lighting that can be configured using its Aura Sync software.

The ASUS XG Station 2 is now available to buy at S$888, which means you’ll end up shelling out over a thousand bucks after factoring in the GPU cost just to give your notebook a performance boost.

Join HWZ's Telegram channel here and catch all the latest tech news!
Our articles may contain affiliate links. If you buy through these links, we may earn a small commission.
Previous Story
South Korea bolsters battery safety rules in light of Note7 battery saga
Next Story
You won't believe how safe small cars are today