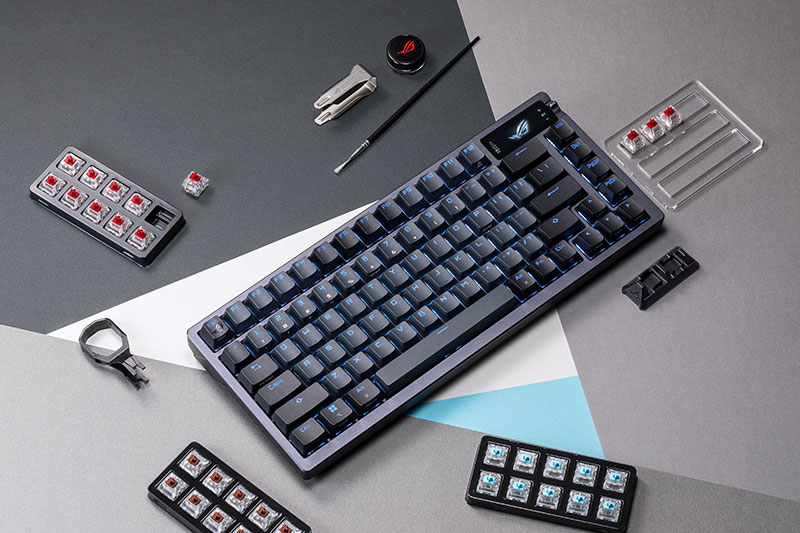 It has clearly been designed to appeal to the enthusiast crowd, and has been outfitted with pre-lubed NX switches, hot-swappable sockets for easy customisation, and PBT doubleshot keycaps for better durability.

The lubed switches supposedly provide smoother keystrokes, although it is likely that anyone serious about the hobby will prefer to lube their own switches. To cater to these folks, the Azoth comes bundled with a DIY lube kit, comprising Krytox GPL 205 GD0 lubricant, three additional switches, keycap and switch pullers, a switch opener, a lube brush, and even a dedicated lube rack to hold your switches.

The stabilisers themselves have been pre-lubed as well, and ASUS says the Spacebar has been given some extra love in the form of additional lubing and modification for better acoustics and feel. 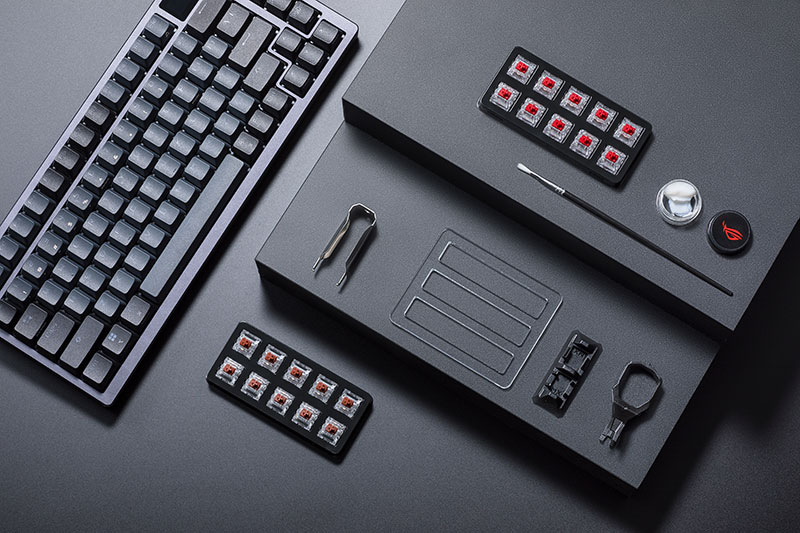 Elsewhere, the gasket mount design utilises 10 silicone gaskets and three-layer PORON foam dampening for a slightly more bouncy typing experience and a deeper sound. On top of that, a 3.5mm-thick silicone pad inside the keyboard further absorbs noise. The base has also been lined with silicone foam, which eliminates echoes while typing.

The built-in 2-inch OLED panel sits in the top right, and it can display everything from system information to keyboard settings, such as your Caps Lock status, connection mode, and PC or Mac indicators. If you wish, it can also display things like battery level, CPU temperature, or custom animations of your choosing.

Finally, ASUS' ROG SpeedNova wireless tech is reportedly good for over 2,000 hours of zero latency gameplay over 2.4GHz. Bluetooth mode can be used to connect to three devices at the same time, and the keyboard can be charged while using it by simply plugging in the USB cable.

The ROG Azoth is expected to be available at the end of January for S$429.

Join HWZ's Telegram channel here and catch all the latest tech news!
Our articles may contain affiliate links. If you buy through these links, we may earn a small commission.
Previous Story
The ASUS ROG Hyperion GR701 chassis looks like it came from the future
Next Story
Samsung Galaxy A14 5G gets higher display resolution than before