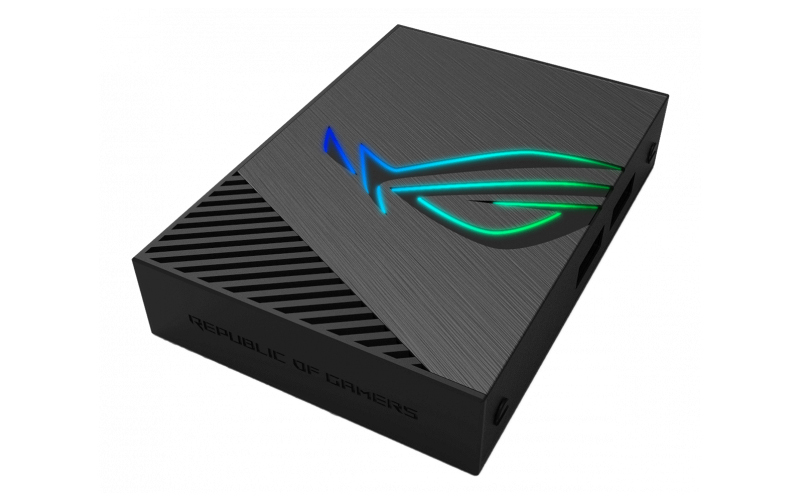 ASUS already has a pretty comprehensive ecosystem of Aura Sync products, a selection that includes everything from PC components to monitors and peripherals. However, what if you want to extend the RGB lighting beyond your desktop using lighting strips?

That’s where the ROG Aura Terminal comes in. It features four independently controllable and addressable RGB headers, so you can use it to control RGB strips on the inside of your PC and on your monitor.

Each channel supports up to 90 LEDs, but you’re limited to 210 LEDs in total, which translates to a maximum of 4.2m of addressable LED strips.

The Aura Terminal ships with three addressable RGB LED strips – two 30cm and one 60cm strip – so you don’t have to buy your own kit. According to ASUS, this is sufficient lighting to illuminate the inside of most PC cases and create a halo around a monitor using the ROG Halo feature.

ROG Halo enables ambient RGB synchronization that responds to the content on your screen when LED strips are mounted behind a monitor. These can also be synchronized with the other Aura Sync LEDs in your PC.

It works by using your GPU to analyze what’s on your screen and determine the average color value for different areas of the screen. It then replicates it by controlling the corresponding LEDs on the attached RGB lighting strips.

The unit can either be powered by a Molex connector or an external power adapter, so you can install it in your PC or leave it outside. In addition, the included cables let you connect the Aura Terminal to your PC using either the internal or external USB 2.0 ports.

It is also equipped with rubber feet and four mounting holes that are compatible with standard 2.5-inch SSD mounting brackets. Alternatively, you can mount it using the included 3M double-sided tape.

The ROG Aura Terminal is available to buy now at S$159.

Join HWZ's Telegram channel here and catch all the latest tech news!
Our articles may contain affiliate links. If you buy through these links, we may earn a small commission.
Previous Story
Nikon’s new Coolpix P1000 takes you closer than ever
Next Story
Google Maps now has a motorbike mode