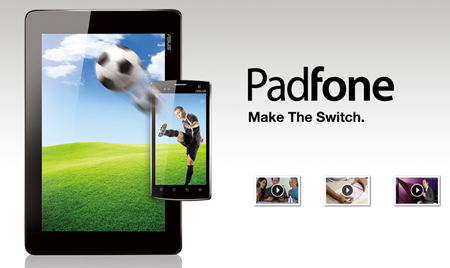 ASUS Chairman Jonney Shih is certainly making a few head-turning announcements at the AsiaD conference today. Shih has announced that the Padfone will have a release date sometime in Q1 2012, though he is still working with cellular carriers on its availability.

During Computex 2011, we had a quick look at the smartphone/tablet hybrid, the ASUS Padfone. The Padfone's specs were shrouded in mystery, and the only details are of its 4.3-inch and 10.1-inch display for its smartphone and tablet components. Besides extending the smartphone's interface to a larger screen, the tablet dock, much like the ASUS Eee Pad Transformer's keyboard dock, also acts as an extended battery.

Details of its availability were also fiercely scarce during the Computex press conference. Our early estimates pegged the Padfone to be available sometime in Q4 2011 (sadly, it won't be available within 2011), and loaded with Google Android 4.0 to cater to its smartphone and tablet form factor. We were spot-on with Android Ice Cream Sandwich, which combines various features from its Honeycomb and Gingerbread variants.

Earlier on, Shih also revealed the ASUS Eee Pad Transformer 2 with an 8.3mm thin profile. More importantly, NVIDIA's quad-core processor will be powering the tablet, thus confirming what NVIDIA CEO and President Jen-Hsun Huang said of the company's Kal-El processors being available by the end of the year.

Source: This Is My Next

Join HWZ's Telegram channel here and catch all the latest tech news!
Our articles may contain affiliate links. If you buy through these links, we may earn a small commission.
Previous Story
Nokia WP7 Phones to Make Appearance at Nokia World
Next Story
Pricing and Availability for Samsung Galaxy Nexus Revealed