ASUS has launched its new graphics card featuring the Radeon HD 7970 GPU. The 28nm GPU is coupled with 3GB of GDDR5 for high memory bandwidth computing requirements. This card is one of the first graphics cards, or more accurately, one of the first PC components to feature a PCIe Gen 3 interface. It translates into higher bandwidth between the GPU and CPU as the new interface doubles the theoretical limit of PCIe 2.0. 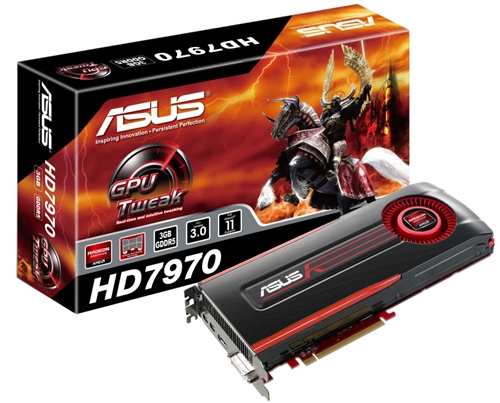 The memory interface has been increased to 384-bit versus the 256-bit memory bus of the Radeon HD 6970 GPU. The core clock speed of the new GPU is rated at 925MHz which is also higher than that of Radeon HD 6970. In order to give the users better control over the prowess of the new GPU, ASUS is including the exclusive and updated GPU Tweak utility.

The utility allows the user to modify clock speeds, voltages and fan performance across up to a maximum of four cards in a CrossFire setup.  It also allows the user to update the BIOS and drivers in order to optimize the performance of the card. The ASUS Radeon HD 7970 features a single dual-link DVI port, two mini-DisplayPorts (1.2) as well as a HDMI port. Its recommended retail price is S$928.