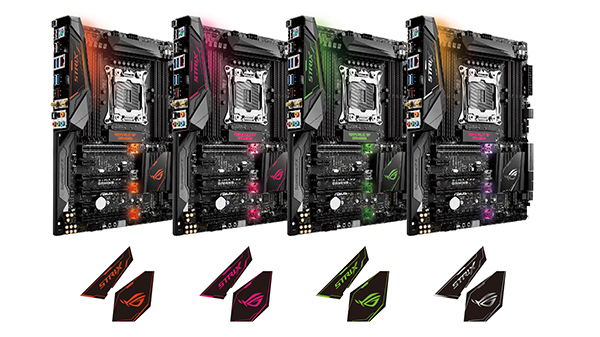 Updated on 16 May 2016: ASUS got back to us with new details, and all the new motherboards will be available only in the middle of June.

Updated on 13 May 2016: Added details on local availability and pricing.

You probably know ASUS’s ROG Strix branding from its graphics cards, but ASUS has never released a motherboard in the series – until now that is. The Taiwanese manufacturer has announced the ROG Strix X99 Gaming motherboard, in addition to three other Signature series boards.

It’s no coincidence that the announcement is coming on the cusp of Broadwell-E’s impending launch, and ASUS likely wanted to have a new series of boards to go with the new generation of CPUs. The new Intel X99 motherboards are expectedly decked out with a number of enthusiast-oriented features. For instance, the ROG Strix X99 Gaming sports a unique OC Socket design that features extra pins for greater overclocking potential, SupremeFX audio, and a plethora of PCIe slots and connectivity options.

When it comes to the non-ROG boards, the X99-Deluxe II sits at the top of the Signature series and has even more expansion options than its ROG Strix counterpart. It has a total of four PCIe 3.0 x16 slots, all of which are reinforced by ASUS’s SafeSlot design (the other boards only have one SafeSlot each), a method of fortifying PCIe slots with metal supports that we’ve already seen on boards from brands like Gigabyte and MSI. On top of that, it has a 3x3 Wi-Fi module, dual Intel Gigabit Ethernet ports, and even two dedicated U.2 ports.

Rounding up ASUS’s X99 refresh are the X99-E and X99-A II motherboards, where the former is the only one among the four to not have a U.2 slot.

However, the defining feature of the new boards is still their customizable lighting options, dubbed ASUS Aura. The Aura lighting control software allows you to tweak the built-in RGB LEDs – these appear to be clustered primarily around the VRM heatsinks – and choose from a range of ten different LED effects. In addition, the boards, with the exception of the X99-E, come with an onboard 4-pin RGB strip header that allows you to hook up an external RGB strip and synchronize the lighting across the entire system.

Finally, ASUS is also bundling a ThunderboltEX 3 add-on card with the X99-Deluxe II, although all the other boards support it as well. The expansion card has three ports, including one USB 3.0 Type-A port and one USB 3.1 Type-C connector. There’s actually a third slot on board, but ASUS didn’t specify what that was and it’s difficult to identify it from just a picture.

All the new Intel X99 motherboards are expected to be available in Singapore by the middle of June, with pricing to be announced closer to the date.