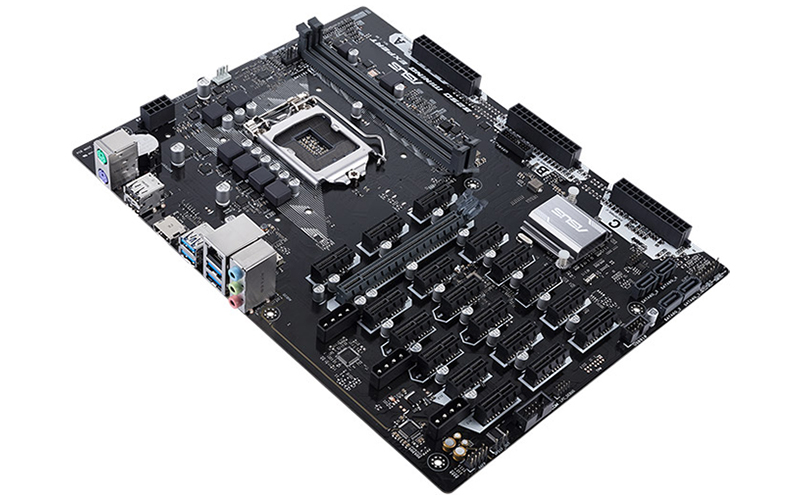 Meet the ASUS B250 Mining Expert, a mining-focused motherboard that helps you maximize the number of individual graphics cards you can have in a single computer. The board supports up to 19 cards – an insane number – which translates into higher hash rates per machine, and consequently, a higher return for every dollar spent.

Mining Ethereum or other cryptocurrency requires very powerful graphics hardware. In other words, you need many, many cards working together in tandem.

However, a regular motherboard generally supports up to four GPUs at most, and some don’t even have space for that many.

The B250 Mining Expert lets you connect up to 19 cards, so that’s a key limitation solved. It can also draw power from up to three PSUs, with each one plugging into a separate 24-pin power connector that is wired to its own block of slots. According to ASUS, there’s no need for additional modifications or manual startup sequences in order to use more than one PSU either.

The PCIe lanes are drawn from the B250 chipset and the CPU, but the board’s Mining Mode sets the PCIe interface to run at Gen 1 speeds. All the slots also default to x1 mode, so they’re all available right out of the box.

Of course, you’ll need extension cables to run that many cards at once, given that ASUS has crammed all 19 slots onto a standard ATX board.

In addition, ASUS says it is working with AMD on a new driver to remove the eight-card limit for Radeon GPUs. The driver is scheduled for release this quarter, and will allow you to properly utilize all 19 slots.

As things stand, combining both NVIDIA and AMD cards still limits you to 16 GPUs as NVIDIA currently restricts systems to just eight GPUs as well.

The B250 Mining Expert currently retails for S$235 on Lazada. There are other mining motherboards available as well, such as the ASRock H110 Pro BTC+, which supports 13 GPUs.