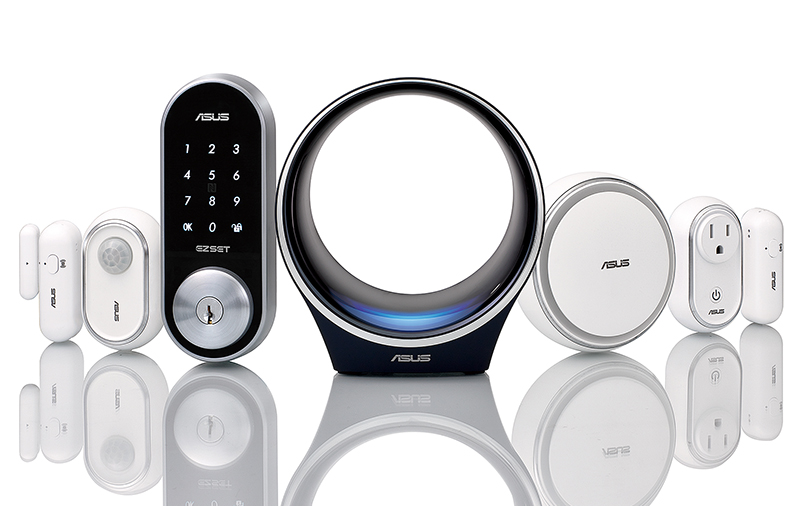 ASUS is keen to get a head start in this market and has just launched ASUS SmartHome, a smart complete home monitoring tool for households.

At the heart of ASUS SmartHome is the funky-looking ASUS SmartHome Gateway. It supports ZigBee, Bluetooth and Wi-Fi connections and manages all of the other ASUS smart home devices.

Complementing the ASUS SmartHome Gateway is a suite of smart sensors, detectors, and switches.

First, there is the SmartHome Siren, a siren that can be paired with other sensors and detectors to provide an alert to homeowners and neighbors.

Then there's the ASUS SmartHome Door Lock, which features four different access methods: password, NFC, the SmartHome app or a traditional key. It can send alerts to homeowners if it detects that someone is trying to tamper with the lock. It can also activate the SmartHome Siren to scare off intruders and alert neighbors.

There's also a trio of sensors: the SmartHome Open/Close Sensor, the SmartHome Motion Sensor, and the SmartHome Temperature/Humidity Sensor. These sensors can be used to alert users of happenings around the house.

Finally, the SmartHome Meter Plug, which can be scheduled or remotely controlled to turn any electrical item on or off, giving users full power control over their home appliances. It can also be used to monitor electricity consumption on a daily, weekly or monthly basis.

ASUS SmartHome will be launching later this month on March 16 at IT Show 2017.

The price of the entire suite of ASUS SmartHome devices, which includes the ASUS Open & Close Sensor, Motion Sensor, Gateway, Siren, Meter Plug, Temperature and Humidity Sensor will be S$699 (U.P. $784) at the IT Show.

These are the prices of the individual components of the ASUS SmartHome: