ASUS announces NVMe support for all X99 and Z97 motherboards

ASUS announces NVMe support for all X99 and Z97 motherboards 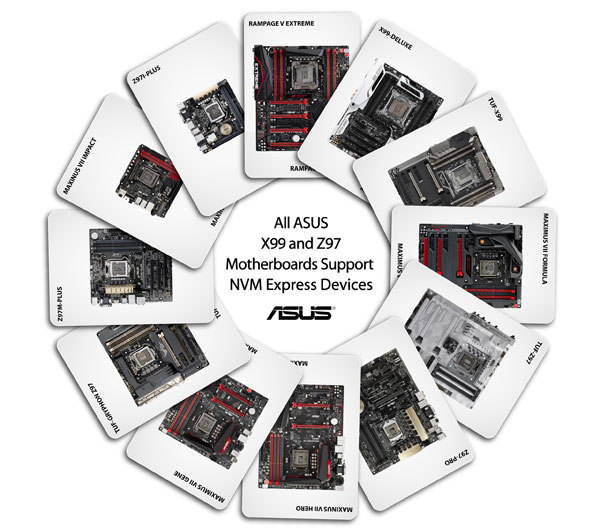 Motherboard manufacturers are lining up to offer support for the NVM Express (NVMe) storage protocol, which will support the latest Intel 750 series PCIe-based SSDs, the first drives to use NVMe that will be available to consumers. NVMe improves the performance of PCIe-based SSDs over Advanced Host Controller Interface (AHCI), thus allowing consumers to maximize the performance of the newest SSD storage devices, improve power efficiency and eventually reduce running costs.

ASUS has now joined Gigabyte and MSI in announcing support for NVMe for all its X99 and Z97 boards. Users need only perform a simple UEFI BIOS update to enjoy the higher data transfer speeds – up to 32Gbps – offered by the new storage protocol when paired with compatible devices.

The update can be done easily via ASUS’ USB BIOS Flashback utility, which downloads the latest BIOS update to a USB flash drive. Users then need only plug in the drive and hit the USB BIOS Flashback or Reset button to flash the BIOS – they don’t even need to have a CPU or RAM modules installed.

In addition to NVMe compatibility, the BIOS update will offer support for PCIe and M.2 (PCIe) interfaces. ASUS X99 motherboards will also be compatible with the latest 2.5-inch NVMe SFF-8639 SSDs via the ASUS Hyper Kit expansion card, which is available for purchase separately. The SFF-8639 interface is physically similar to that of SATA Express, but provides the 32Gbps bandwidth of a PCIe 3.0 x4 interface.

Drives like the Intel 750 series PCIe SSDs need to be connected via NVMe for consumers to experience their true performance, which can be up to 5x faster than more conventional SATA 6Gbps interfaces.

For a full list of supported boards, please refer here. BIOS updates for all X99 and Z97 boards are available now under the Support section on their respective product pages on the ASUS website, and we expect updates for H97 boards to follow soon.