All the AMD B550 motherboards you can buy from ASUS now

All the AMD B550 motherboards you can buy from ASUS now 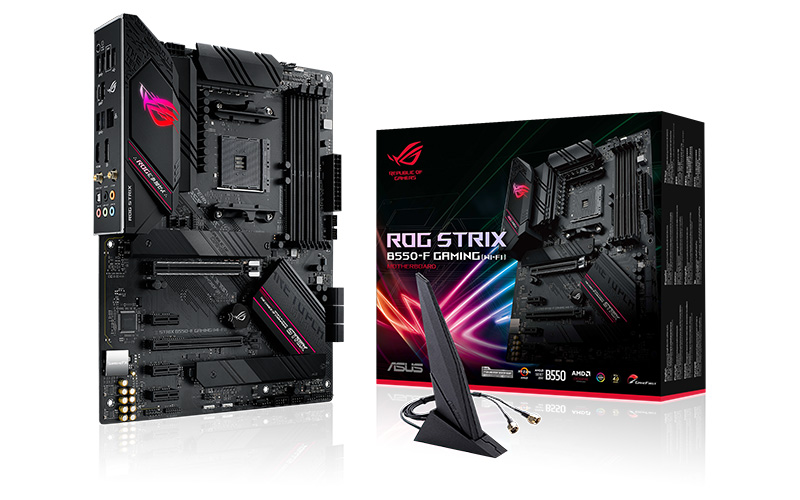 ASUS' new motherboards based on AMD's latest B550 chipset are here at last. The B550 chipset is intended to be a budget version of the high-end X570, similar to the way B450 was a more affordable version of X470. Compared to B450, the B550 chipset now supports PCIe 4.0 from the CPU, even though you're still more likely to benefit from PCIe 4.0 SSDs than graphics cards at the moment. However, the CPU and chipset are still connected by a PCIe 3.0 bus.

Other features include support for SLI and CrossFire and USB 3.2 (Gen 2), which offers speeds up to 10Gbps.

Here's an overview of all the ASUS B550 boards you can buy now and their prices:

The new ASUS B550 motherboards feature beefed-up VRMs for more reliable and responsive power, with most models utilising auxiliary power inputs with ProCool solid-pin connectors. On top of that, you get things like Wi-Fi 6, 2.5Gbps Ethernet, and support for higher frequency memory.

Elsewhere, the ROG Strix and TUF Gaming boards also come with AI noise-canceling software, which supposedly improves the clarity of in-game communication. With support for 3.5mm, USB, and Bluetooth headsets, the software leverages a large deep learning database to preserve the sound of your voice while cutting out ambient sounds like keyboard clatter and mouse clicks. The ROG Strix B550-E Gaming was built for AMD's higher-end processors and dual or triple expansion card setups. It offers a 14+2-phase VRM, together with metal-reinforced PCIe slots that support two-way SLI and three-way CrossFire. On top of that, you'll find six fan headers and dedicated AIO and pump headers for both closed-loop cooling solutions and more elaborate custom loops. It also features dual M.2 sockets, each with their own dedicated heatsink to prevent thermal throttling. 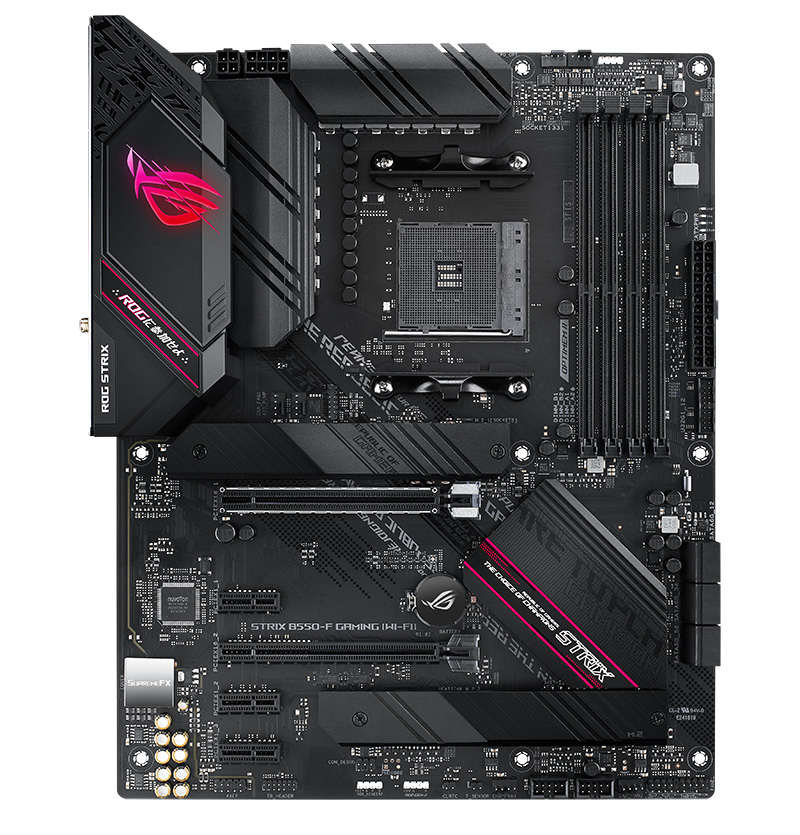 ASUS has paid attention to the design here, and the board is decked out with a catchy ROG eye logo and recessed cybertext patterns. Like the ROG Strix B550-E Gaming, there's plenty of RGB headers as well for you to attach your own lighting strips. Small system builders will be interested in the ROG Strix B550-I Gaming, a mini-ITX model that has just a single PCIe 4.0 x16 slot. It can drive compatible DIMMs at speeds up to 5,100MHz by taking advantage of the shorter trace length between the memory slots and the CPU, while sporting also an 8+2-phase VRM. There's even active cooling on the VRM and an 8-pin auxiliary connector with solid pins.

The I/O panel is pre-installed too to simplify the installation process, and the board is outfitted with USB 3.2 (Gen 2) Type-C and Type-A ports and a 2.5Gbps Ethernet connector and Wi-Fi 6 support. In addition, you'll find a front panel USB 3.2 (Gen 2) connector for full compatibility with the latest chassis. Separately, the 3.5mm connectors are all helpfully lit by LEDs in unique colours so it's easier to connect speakers, headsets, or microphones. The TUF Gaming boards offer a selection of high-end features in a more affordable package. The TUF Gaming B550-Plus comes with an 8+2-phase VRM topped by large heatsinks to keep the most crucial components cool. The main PCIe 4.0 x16 slot is backed by metal SafeSlot reinforcement, while the auxiliary connector also utilises solid pins. It comes with two M.2 sockets that can take drives up to 110mm long, and there's support for Thunderbolt 3 expansion cards courtesy of an onboard header. It also serves up 2.5Gbps Ethernet connectivity, but there's no Wi-Fi 6 or Bluetooth support. There is however an M.2 E-key slot if you want to add on your own module.

ASUS is using a Realtek S1200A audio codec on this board, alongside support for DTS Custom which offers 3D surround sound virtualisation.

The TUF Gaming B550M-Plus (Wi-Fi) is largely similar, but it offers a smaller micro-ATX footprint. The main difference is that one of the M.2 sockets will only take in standard 80mm devices. The board is available in two variants, one with support for Wi-Fi 6 and Bluetooth 5.1 and one without. Finally, there's the PRIME B550M-A (Wi-Fi), another micro-ATX board that offers a more rounded feature set that will satisfy both gamers and business users. It features dual PCIe x16 slots that support CrossFire, while the two M.2 sockets accept drives up to 110mm.

Join HWZ's Telegram channel here and catch all the latest tech news!
Our articles may contain affiliate links. If you buy through these links, we may earn a small commission.
Previous Story
Purported images and specs of Galaxy Note20 Ultra leaked
Next Story
Here's what to expect from WWDC 2020 according to Bloomberg