Someone made a phone case that looks just like human skin, and it's horrifying

Someone made a phone case that looks just like human skin, and it's horrifying 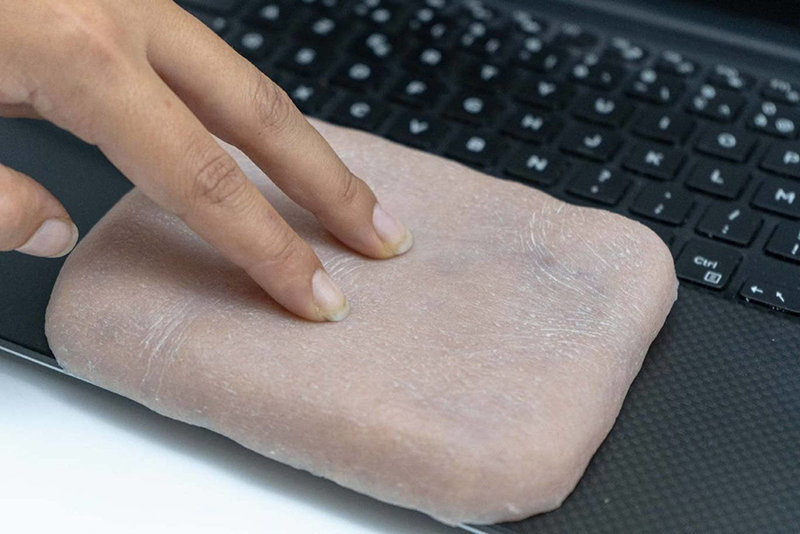 Google's Pixel 4 phones may have introduced a novel new way to interact with your phone using radar, but researchers are still exploring new input methods for augmenting devices. Whether you'll actually want to use them is another matter altogether though. Researchers from Bristol and Paris have developed an artificial membrane that looks just like human skin, and it's rather horrific. The skin even mimics the sensory capabilities of skin, so you can tickle, caress, or even pinch it.

The artificial skin is comprised of a multi-layer, silicone membrane that mimics the layers in human skin. This includes a textured surface layer, an electrode layer featuring conductive threads, and even a hypodermis layer.

“This is the first time we have the opportunity to add skin to our interactive devices. The idea is perhaps a bit surprising, but skin is an interface we are highly familiar with so why not use it and its richness with the devices we use every day?” said Dr. Anne Roudaut, Associate Professor in Human-Computer Interaction at the University of Bristol, who supervised the research. Why not use skin? How about the fact that it's really creepy?

Researchers in the study created a phone case, computer touch pad, and smart watch to demonstrate how touch gestures can be used to augment how we communicate with our machines, or each other via these devices. For example, they designed a messaging application where users can express emotions through tactile interactions with the artificial skin. The intensity of touch controls the size of emojis, while the nature of the touch dictates the emotion. In this case, a strong grip conveys anger, while tickling shows a laughing emoji.

“This work explores the intersection between man and machine. We have seen many works trying to augment human with parts of machines, here we look at the other way around and try to make the devices we use every day more like us, i.e. human-like,” added Dr. Roudaut. Truly, I don't want my phone to look like it was made from someone's hide, but the researchers are already inviting interested developers to get in touch.

They're calling this tactile interface "Skin-On", and they say their next step is to make the skin even more realistic. To that end, they're already looking at embedding hair and temperature-sensing features that could literally give devices goosebumps. My only question is this – but why?