ARM-based chips power billions of smartphones, cars, and other connected devices today, and they have achieved near ubiquity in mobile devices. However, the company is now readying for a push into the future with its just-announced DynamIQ (pronounced “dynamic”) architecture that promises significant improvements in performance and efficiency, especially in the area of artificial intelligence (AI).

DynamIQ is an extension of ARM’s current big.LITTLE design, which it first introduced in late 2011. The latter features two different ARM cores on the same chip and pairs a two- or four-core efficiency cluster with a two- or four-core performance cluster. The efficiency cluster handles less demanding tasks, allowing the more power-hungry performance cluster to sit idle when it is not needed and thus conserving battery.

The new DynamIQ builds on that with a larger cluster paradigm that can include as many as eight cores per cluster. But instead of having two separate core clusters, you’d get a new single-cluster design, where memory is shared between cores for increased efficiency. Various core designs would be housed within the same cluster, with cores coming from different ARM Cortex-A families. 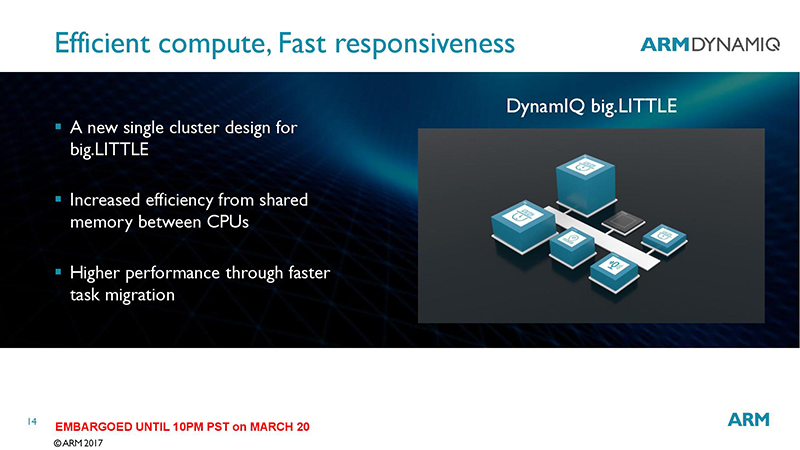 The original big.LITTLE design was also limited in terms of how hardware and software makers could utilize it, partly because each core cluster was locked to a fixed frequency and power consumption.

In comparison, each core in the DynamIQ architecture can be controlled independently for frequency, voltage, and even sleep states. Furthermore, there is a lot more flexibility to the number of “big” and “little” cores on a chip, thus freeing up many more possible configurations.

The memory subsystem has been redesigned as well, promising speedier data access and smarter power management. Individual cores are also now capable of more granular frequency adjustments, so they can ramp up and down as needed and better respond to variations in power and thermal conditions.

To cap things off, ARM says that built-in predictive systems help cores switch on and off more quickly than current chips, theoretically translating into even better battery life.

ARM deliberately made DynamIQ more versatile in order to give SoC manufacturers like Qualcomm and MediaTek the freedom to design their own ARM SoCs. This allows future ARM chips to cater to a wider range of products, and better position ARM chips for things like IoT devices, data center servers, in-car systems, and AI and machine learning. 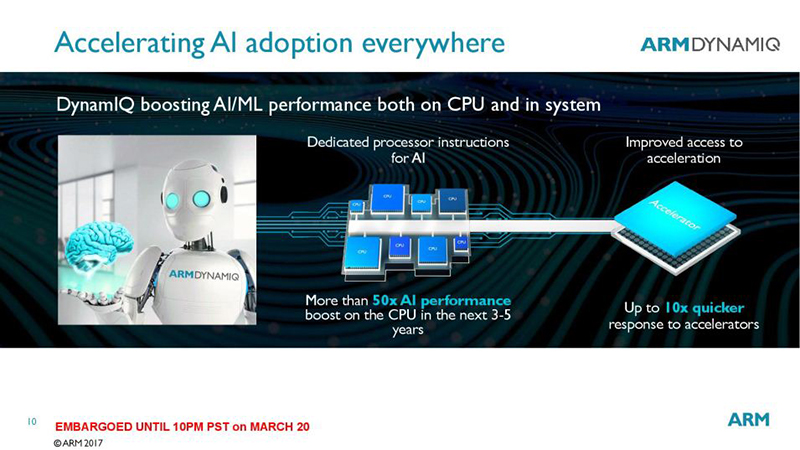 AI is a particular focus area, and the company is claiming a 50 times increase in AI-related performance with DynamIQ chips in the next three to five years, thanks in part to specialized accelerators that can boost performance.

Chips based on the new design are expected to launch as soon as this year.

Join HWZ's Telegram channel here and catch all the latest tech news!
Our articles may contain affiliate links. If you buy through these links, we may earn a small commission.
Previous Story
The Cisco Spark Board launches in Singapore, aims to take workplace collaboration to the next level
Next Story
In the near future, electronic tattoos will turn your skin features into smartphone controls