According to its official blog, ARM has unveiled its power optimized Cortex-A15 quad-core processor aimed directly at notebooks and network-based hardware. As it is a hard macro processor with hardware set parameters, the processor may speed up its development and deployment. 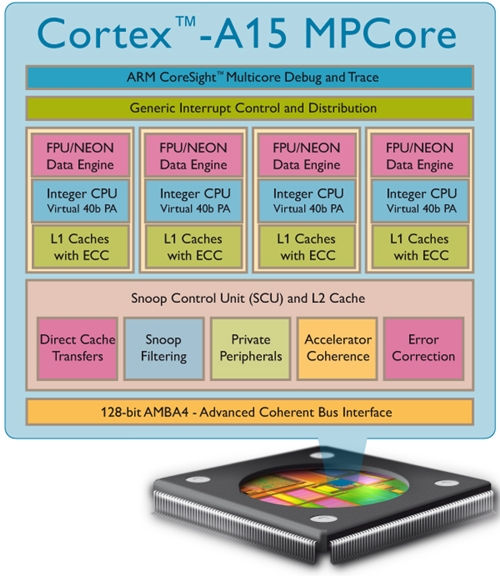 The newly launched ARM Cortex-A15 MPCore processor is a hard macro variant quad-core with a rated clock speed of up to 2.0GHz, built using the TSMC 28nm HPM process and offers similar power consumption ratings to their existing Cortex-A9 products. It also includes ARM's NEON and Floating Point Unit technology, EEC for L1 and L2 RAM, as well as its support for virtualization, which makes it suitable for a wide variety of applications and their virtual environments.

ARM has uniquely released it as a hard macro version, which the company says offers the best compromise between performance and power drain as well as allowing for it to hit the market much faster. Usually, the ARM CPUs can be tweaked according to their customers' exact specifications; however, such practices will ultimately increase the time the processors take to reach the store shelves. According to ARM, the Cortex-A15 MPCore processor can be used to power smartphones, tablets, mobile computing, high-end digital home systems, servers and wireless infrastructure.