Archos has unveiled the Archos PC Stick, its own computer-on-a-stick that goes head to head with the Intel Compute Stick and Lenovo Ideacentre Stick 300. Despite somewhat tepid reviews of the Intel Compute Stick, the stick PC market is certainly heating up, and you can be sure that other manufacturers will be joining the game soon.

The Archos PC Stick shares the same hardware as the Intel and Lenovo’s compute sticks, with an Intel Atom Z3735F processor, 2GB of RAM, and 32GB of onboard storage. There is also a similar complement of ports, with a single micro SD card slot, one USB 2.0 port, and a micro USB port for power.

There is also the usual support for Wi-Fi and Bluetooth 4.0. But at 113 x 38 x 14mm, it is actually almost an entire centimeter longer than the Compute Stick and Stick 300 and just as wide and thick. 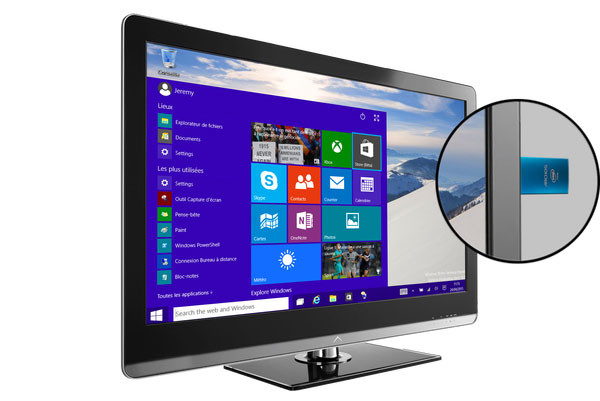 However, the Archos PC Stick sports a couple of noteworthy differences that allow it to stand out from the crowd. First off, the PC Stick will ship with Windows 10, unlike its rivals which ship with Windows 8.1. This means that users will be able to avoid the hassle of upgrading – a fairly important difference seeing as there’s no saying how long Windows 10 will take to install on such hardware specifications.

In addition, the Archos PC Stick can be controlled via keyboard applications and game controls on any Windows, Android and iOS device. This actually resolves one of our main gripes with the Compute Stick and Stick 300’s design, which for all their much-vaunted portability, still require cumbersome input peripherals.

If it works as it’s supposed to, this feature could allow owners of the Archos PC Stick far greater mobility.

And to cap matters off, the PC Stick will retail for only US$99, a good deal cheaper than the US$149 Intel Compute Stick and US$129 Lenovo Ideacentre Stick 300. Archos didn't announce a specific release date, but it will definitely be some time after Windows 10's 29 July launch.