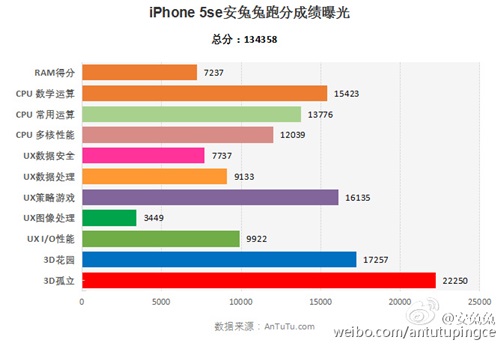 Apple just announced the iPhone SE a few hours ago, but someone in China managed to put the 4-inch iPhone to the test with AnTuTu benchmark.

The A9-powered iPhone SE managed to score 134,358 on the AnTuTu benchmark, which places it slightly above the iPhone 6s and 6s Plus. The larger iPhones have an average score of 132,620 which is not surprising since the iPhone SE has a smaller 4-inch display with lesser pixels to push.

What's more interesting is the fact that the iPhone SE has a higher score than the Galaxy S7; the latter has scores ranging between 105,000 and 125,288 depending on the processor. This may start flame wars between the two camps, but let's take a chill pill - benchmark numbers do not correlate with real world performance.

Join HWZ's Telegram channel here and catch all the latest tech news!
Our articles may contain affiliate links. If you buy through these links, we may earn a small commission.
Previous Story
Apple said to unveil ultra-thin 13 and 15-inch MacBooks by end of Q2
Next Story
Former Intel CEO Andy Grove passes away at age 79