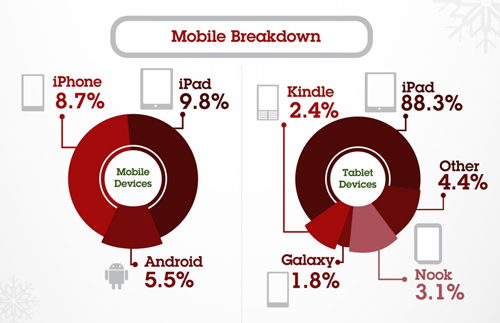 Black Friday -- named as such because profits from that day alone help retailers stay in the black -- has come and gone. Reuters reported that online sales during Black Friday are up 26% compared to last year. According to Comscore, 16.3% of Black Friday's US$1.04 billion online sales revenue came from mobile devices.

IBM's Analytics Benchmark tool found that Apple's iPad led the way in terms of sales of mobile devices. It contributed to 9.8% of all online sales made during that period, while the iPhone was a close second with 8.7%. Android devices meanwhile, were a distant third with 5.5%. The results also point to the iPad being  the tablet of choice for online shoppers with 88.3% of tablet online sales coming from iPads.

According to Business Insider, Apple was supposed to have conceded significant amount of market share to other tablets. However, those market share numbers have less meaning when compared the profit generating capabilities of iOS devices.

Apple's CEO Tim Cook has long been skeptical of market share stats. When Apple announced the iPhone 5, he said the iPad had 92% of tablet web traffic, adding, "I don't know what these other tablets are doing. They must be in warehouses or store shelves or maybe in people's bottom drawer."