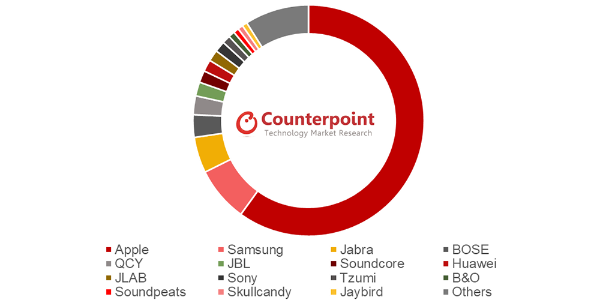 A market report by Counterpoint Research shows that Apple's AirPods are the best-selling true wireless headphone by a large margin.

Looking at the chart above, we can see that the AirPods' market share extend well beyond 50% and is a long way ahead of rivals like Samsung, Jabra, and Bose.

Considering the AirPods' blend of ease-of-use and performance, this is not a surprise.

If you are wondering, the exact percentage is only available to those who pay for the full report.

What the charts also show is that the market for true wireless headphones is contested by many smaller players.

While Apple continues to lead in this market, the report states that the recent launch of the second-generation AirPods failed to boost market share.

Apple’s market share remained at the same level seen in the last quarter, failing to grow in spite of the launch of its second generation AirPods. While sales of the first generation AirPods were higher than expected thanks to a variety of sales promotions for stock-outs in the channel in Q1 2019, sales of the new model were weaker than initially expected due to the market’s mixed response.

This could be because most users are waiting for more substantial upgrades. After all, Apple is rumored to be launching two more AirPods by Q1 2020.

One is said to be an iterative update to the recently launched second-generation model while the other will feature an all-new design. Water resistance and active noise-canceling are two features that are expected to be included in these new AirPods.