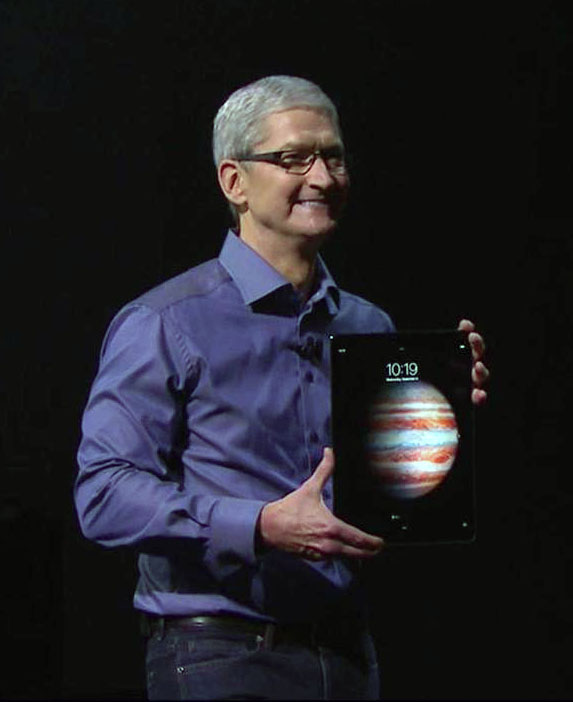 After months of rumors, Apple's larger, more productivity-aimed iPad Pro is here. The latest addition to the iPad lineup was announced at Apple's 9th September event with Apple CEO Tim Cook calling it the "biggest news in iPad since the iPad.”

The new iPad Pro has a 12.9-inch display, but is surprisingly thin at just 6.9mm (just 0.8mm thicker than the iPad Air 2), although its a bit on the heavy side at 712g. Just to give you an idea of how large the screen is, the width of the iPad Pro is the same as the height of the iPad Air 2.

The display on the Pro has a 2,732 x 2,048 pixels resolution (that's 5.6 million pixels in total) giving it a pretty respectable 265ppi. That means the iPad Pro has more pixels than the 15-inch Retina MacBook Pro. Apple has adopted a lot of the same technology from its iMac with Retina 5K display for the iPad Pro. For the first time, the iPad Pro display also has a variable refresh rate, which means the refresh rate can be slowed down to save battery.

To boost the Pro's functionality as a content watching device, Apple has finally added a stereo speaker setup. In fact, they've done better than that, and the Pro has a unique four-speaker audio system that balances stereo and frequencies depending on how you hold it! 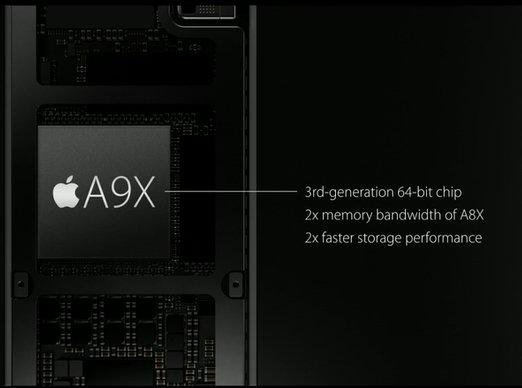 Unfortunately, the camera hasn't been upgraded. It's the same 8-megapixel iSight camera that's on the Apple iPad Air 2, and it still doesn't have an LED flash. Like last year's iPads, the Pro has a Touch ID sensor too.

At this size, many people are probably going to want to replace their laptop with the iPad Pro. Apple is here to help with two new accessories, designed specifically for the iPad Pro. The first is a Smart Keyboard, which is covered in a fabric that forms the structure for the keyboard. The keyboard attaches magnetically to the iPad Pro, and connects via three circles along its side. The smart keyboard looks a lot like Microsoft's Surface Pro keyboard. The keyboard will retail for US$169 (~S$239).

Along with the keyboard, Apple is launching a stylus for the iPad Pro called the Apple Pencil. When you're using the Pencil, the iPad Pro increases the amount of scanning on the surface of the display to improve accuracy. The Apple Pencil behaves somewhat similarly to Samsung's S-Pen, and has sensitivity sensors so you can press lightly for brief strokes or harder for wider strokes. Apple claims it feels like a true writing or drawing instrument.

The Apple Pencil can be recharged using a Lightning connector that plugs directly into the iPad Pro. Apps like Mail and Notes apps all support Apple Pencil, and amazingly, Apple even invited Microsoft on stage to demonstrate new versions of its Office for iOS apps that include support for the Pencil. The Apple Pencil will retail for US$99 (~S$140).

Our articles may contain affiliate links. If you buy through these links, we may earn a small commission.
Previous Story
Apple iPhone 6S and 6S Plus local pricing revealed! Pre-order begins from 12 September
Next Story
Prices of Apple iPad Pro models to start from US$799, base storage option of 32GB?