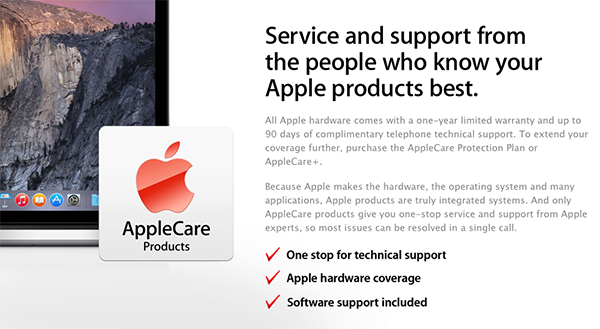 Apple has just revised terms of its AppleCare protection plan for its Mac notebooks.

It will now replace the batteries of any Mac notebook that holds less than 80% charge. Previously, AppleCare would only replace batteries if the batteries were deemed defective.

"Your Apple One Year Limited Warranty or AppleCare Protection Plan includes replacement coverage for a defective battery. If you purchased an AppleCare Protection Plan for your Mac notebook with a non-removable battery, Apple will replace the notebook battery at no charge if it retains less than 80 percent of its original capacity. If you do not have coverage, you can have the battery replaced for a fee."

"Your one-year warranty includes replacement coverage for a defective battery. You can extend your replacement coverage for a defective battery to three years from the date of your notebook purchase with the AppleCare Protection Plan. However, the AppleCare Protection Plan for notebook computers does not cover batteries that have stopped working or are exhibiting diminished capacity due to normal use except when it is the result of a manufacturing defect."

The new terms are definitely much clearer on the prerequisites for a free battery replacement. In the past, it was difficult and also tedious to define what constituted a battery manufacturing defect. The batteries in MacBooks were designed to hold at least 80% of their charge after 1000 charge cycles.

This new changes will definitely be welcomed by MacBook users, especially those who suffer from battery anxiety and are worried that their battery would degrade and fail on them before their MacBook does.

Join HWZ's Telegram channel here and catch all the latest tech news!
Our articles may contain affiliate links. If you buy through these links, we may earn a small commission.
Previous Story
EKWB, XSPC to launch AMD Radeon R9 Fury X water block
Next Story
OnePlus 2 to have a fingerprint sensor that unlocks "faster than Touch ID"