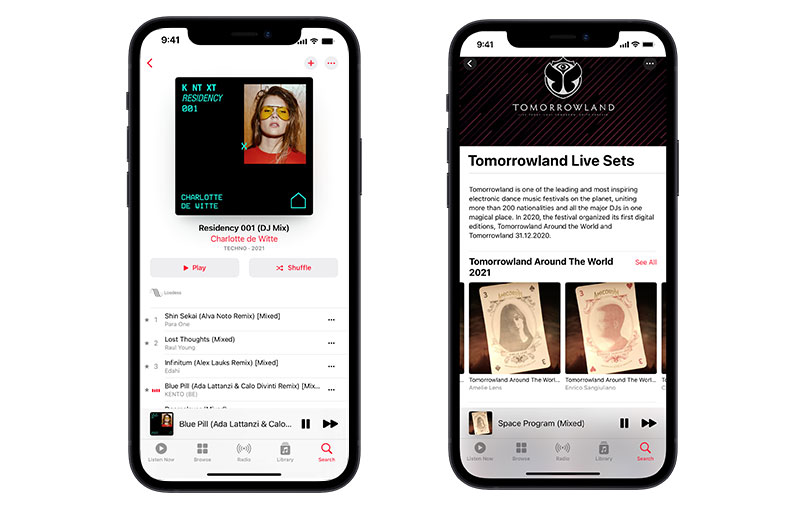 For the first time ever, DJ Mixes on Apple Music will have long term monetary value for all artists and creators whose content are featured in Apple's music platform.

By building upon the Shazam tech, which Apple acquired in 2018, and partnering with various labels, Apple Music now has the tools to properly identify and fairly compensate individual creators, clubs, curators, festivals, and more. It will also allows Apple Music subscribers to see the names of individual tracks, skip songs within the mix, listen with lossless audio on “most mixes,” and save them to their library for viewing offline.

In fact, Apple Music is already working with popular DJ Mixes suppliers such as Studio K7, Charlotte De Witt, Mixmag and Tomorrowland on the new arrangement. There’s a dedicated genre page for DJ mixes within the Apple Music app, and the company says engagement has tripled in the last twelve months, with over 300 million streams of DJ mixes so far - so you can imagine the montary benefits that bring to the mixes' respective owners.

Apple's solution is an answer to many DJs' conundrum, as other live-streaming platforms like YouTube or Twitch might flag the use of other artists’ songs as copyright infringement. These artists are entitled to royalties when their song is played by a DJ during a live set, but dance music further complicates this, since small samples from various songs can be edited and mixed together into something unrecognizable.

Tomorrowland is delighted that Apple Music subscribers around the world can now go down memory lane and immerse themselves in more than 100 iconic full Tomorrowland DJ sets from the 2016, 2017, 2018, 2019 festival editions, as well as the digital editions of Tomorrowland – Around the World and Tomorrowland 31.12.2020. Previously unavailable on streaming, legendary performances from the likes of Alesso, Amelie Lens, Carl Cox, Charlotte de Witte, David Guetta, Diplo, Hardwell, Major Lazer, Martin Garrix, The Chainsmokers, Tiësto and many more are now available to stream and relive – united in one magical place.” - Filip Teerlinck, Head of Media, Tomorrowland

Join HWZ's Telegram channel here and catch all the latest tech news!
Our articles may contain affiliate links. If you buy through these links, we may earn a small commission.
Previous Story
Opensignal: Singapore has much to catch up on for 5G speeds on the global stage
Next Story
The rest of Disney's 2021 movies will premiere exclusively in theaters