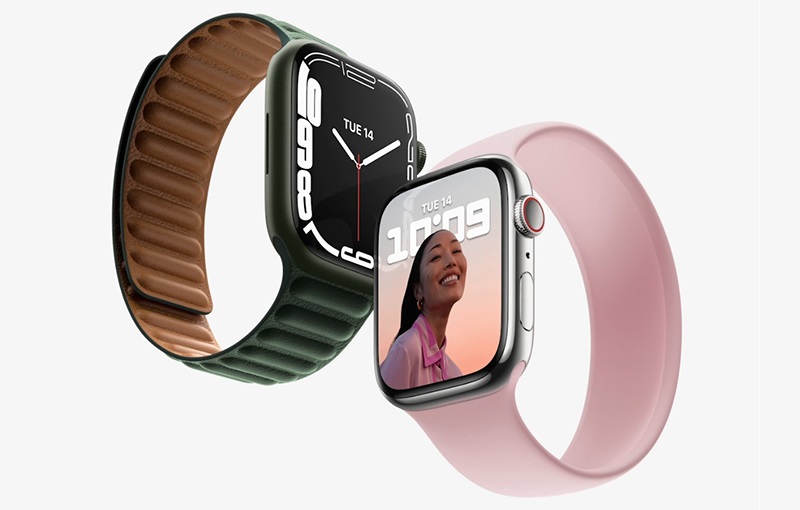 Apple managed to fit even more into its smartwatches, bringing us a host of Apple Watch updates at its latest online-only keynote (15 September 2021). 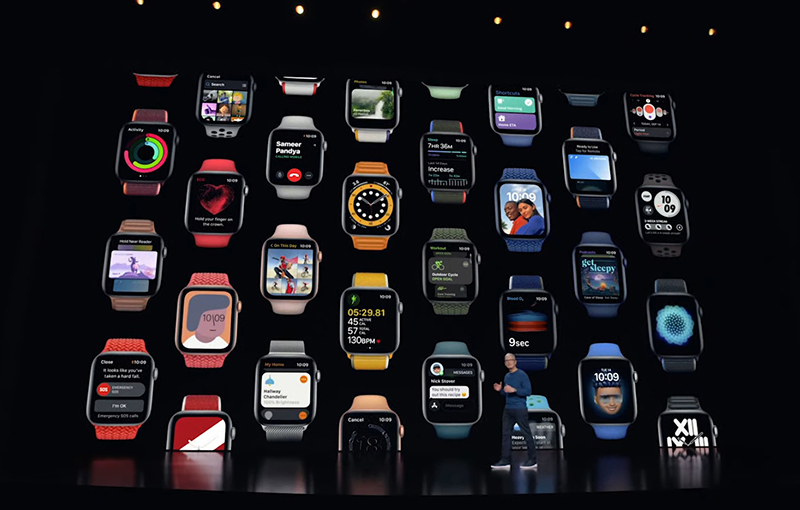 To start, the announced Apple Watch Series 7 marks its 2021 iteration of the popular Apple wearable. The new version packs a bigger display, faster charging, a crack-resistant front crystal, while keeping all its well-liked features like ECG, Blood Oxygen, and Apple Wallet access. 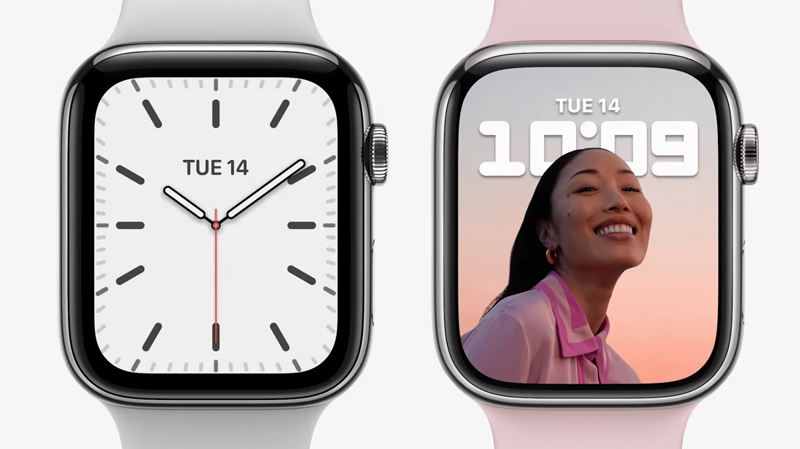 Apple managed to do all that without changing the size of its watch case, which makes the Apple Watch Series 7 compatible with existing and older Apple Watch straps. 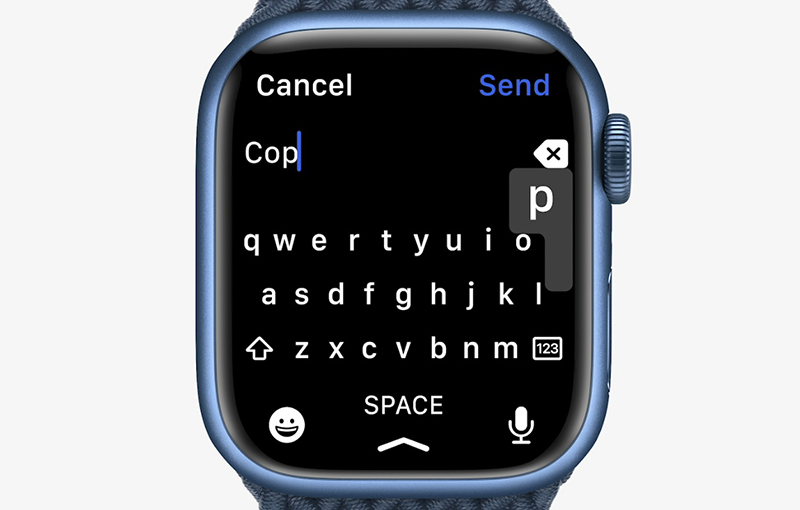 A bigger display comes with added perks. It’s now 70% brighter indoors than the Series 6, so it’s possible to tell time without having to ‘wake’ the display. Also, the increased real estate was enough for Apple to add a QWERTY keyboard on the Series 7. This keyboard can be controlled via regular tap-based typing or swiping, and Apple has packed on on-device intelligence to make it anticipate the words used as you type. 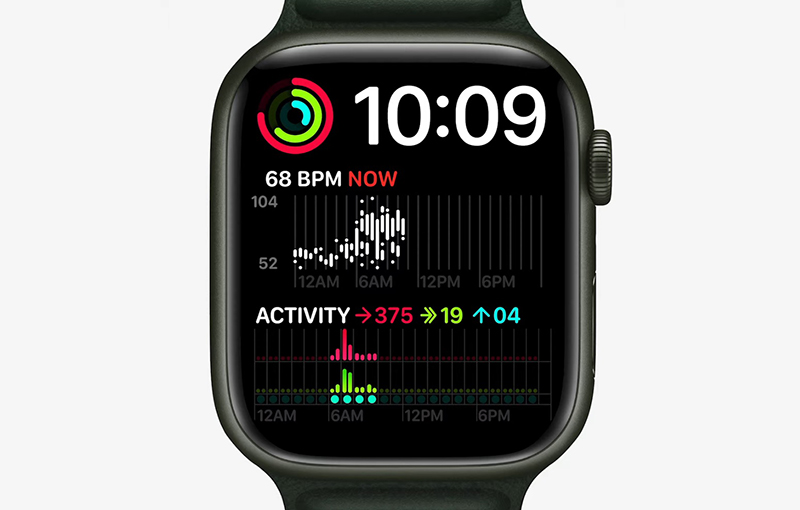 Another perk that takes advantage of its increased display area is two additional larger font sizes. In-menu buttons for apps like Stopwatch, Activity, Alarms, and more are also bigger, making them easier to press.

Watching out for hard knocks 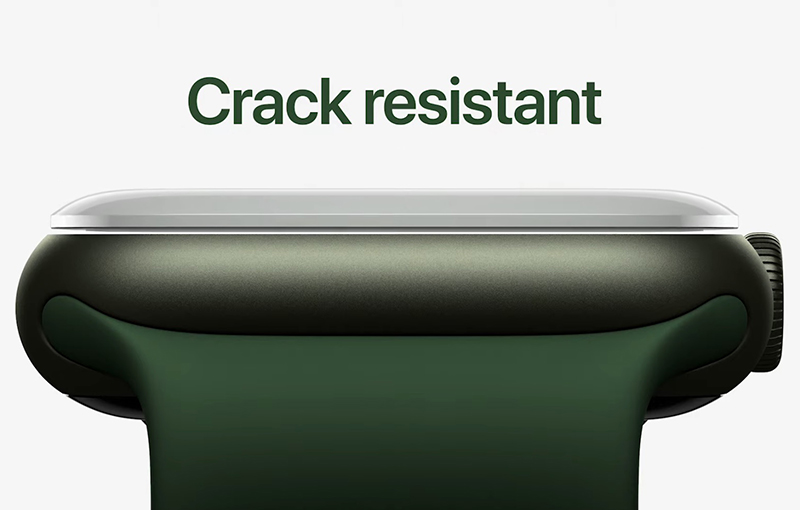 The redesigned Apple Watch Series 7 didn’t just get upgrades in appearance. It now offers a front crystal with “more robust geometry”, making it more crack-resistant than Apple Watches before it without affecting its clarity.

Apple Watch Series 7 is now certified with IP6X protection. The ingress rating means that it’s certified against dust, but has no IP-rated water protection. However, Apple said that the Watch Series 7 has WR50 water resistance rating, which is on par with previous swimproofed Apple smartwatches.

Faster charging, because time is of the essence 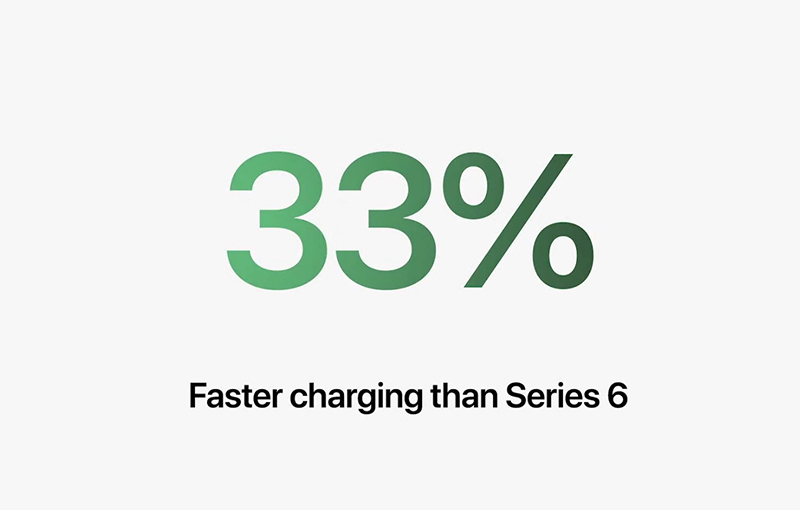 Despite its bigger display, Apple still rated its Watch Series 7 battery life at 18 hours, just like before. But the new wearable now offers 33% faster charging, thanks to a new charging architecture used and through its companion Magnetic Fast Charger (USB-C) Cable. 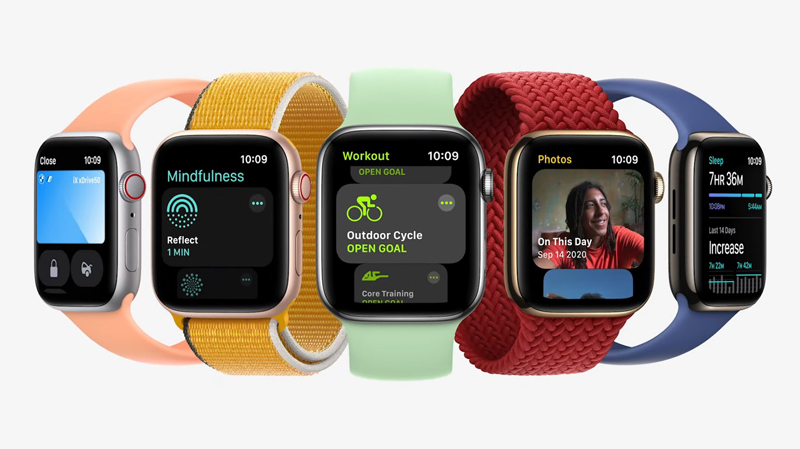 No Apple Watch update is complete without software upgrades. Apple revealed even more details about WatchOS 8 since its last introduction at WWDC 2021.

Cyclists can also see metrics of their cycling performance, and the Watch also supports auto-pause and resume for more accurate riding data - so stopping at traffic lights doesn’t ruin your workout numbers.

Apple Watch is also more accurate at measuring e-bike active calories with an updated algorithm, and the device can now tell if you’re using pedal-assist or pure leg power. 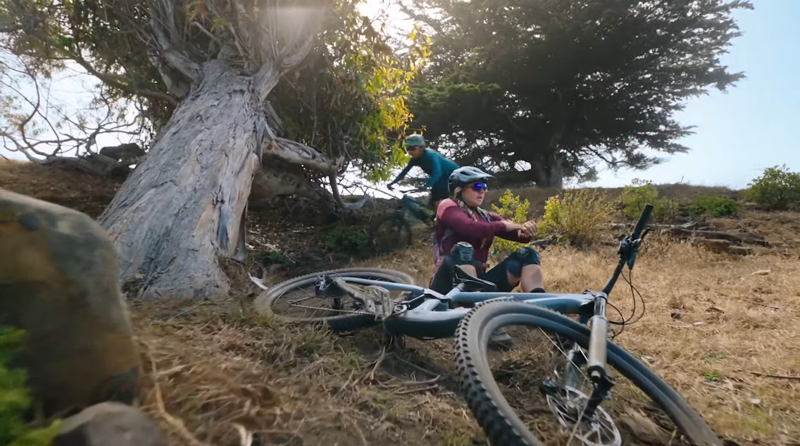 Other WatchOS 8 updates are its previously announced Mindfulness app, sleep respiratory tracking, and the addition of Tai Chi and Pilates workout types to Fitness. What’s new, however, are the enhancements to Fall Detection. Taking a page from its 2018 iteration, Fall Detection algorithms are now updated to detect falls during workouts too. This feature works in its default Health app or other third-party workout apps that sync with Apple Health.

WatchOS 8 comes to Apple Watch Series 3 and later, starting on 21 September 2021. It requires iPhone 6s with iOS 15 or later, and not all features are available on all devices or regions. For example, the expanded Fall Detection for workouts only applies to Series 4 and newer watches. 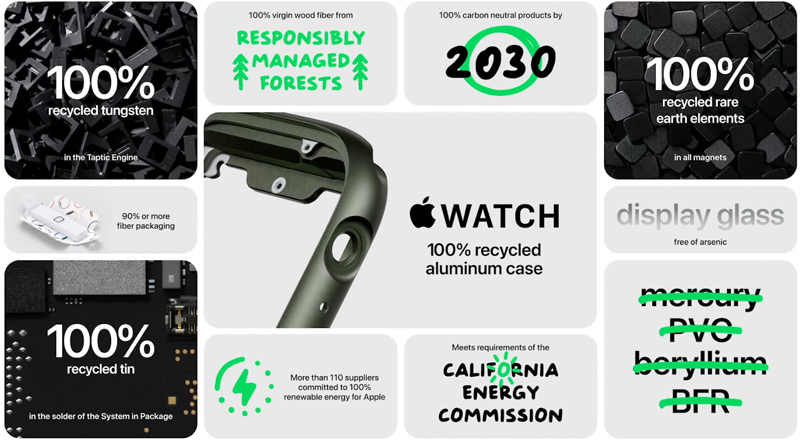 Apple Watch Series 7 uses 100% recycled rare earth elements in all its magnetic components (including the Taptic Engine), along with nearly 100% recycled tungsten. Aluminium models feature 100% recycled aluminium for their watch cases, and the device is made without using harmful substances like mercury, PVC, beryllium, or BFRs (brominated flame retardants). 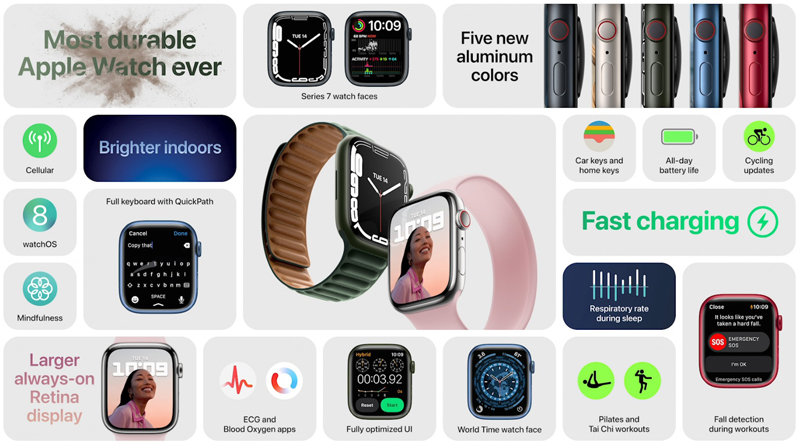 Apple Watch Series 7 comes in both 41mm and 45mm sizes, starting at US$399 “later this Fall”. However, Apple has yet to announce Singapore availability or pricing. 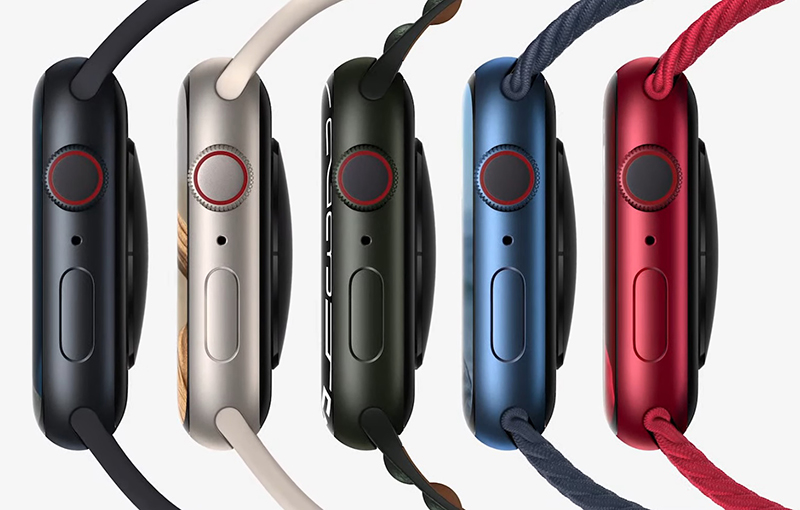 Besides its Series 7 bands, Apple Watch Nike and Apple Watch Hermès are getting new straps too. Nike is adding a refreshed Nike Sport Loop in three colours, which pairs with the Nike Bounce watch face. 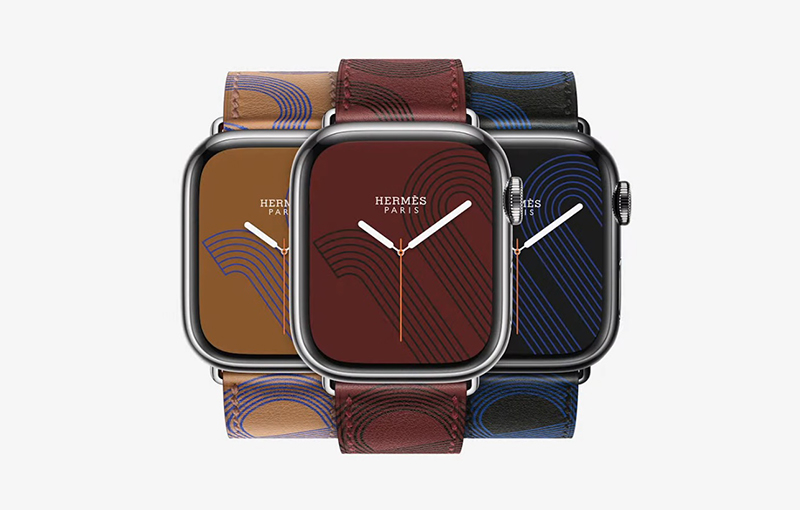 Read Next (3): Should you get the discounted iPhone 12 instead?

Join HWZ's Telegram channel here and catch all the latest tech news!
Our articles may contain affiliate links. If you buy through these links, we may earn a small commission.
Previous Story
Apple discontinues the iPhone 12 Pro and Pro Max with the launch of iPhone 13
Next Story
Apple iPhone 13 Singapore launch pricing and availability details