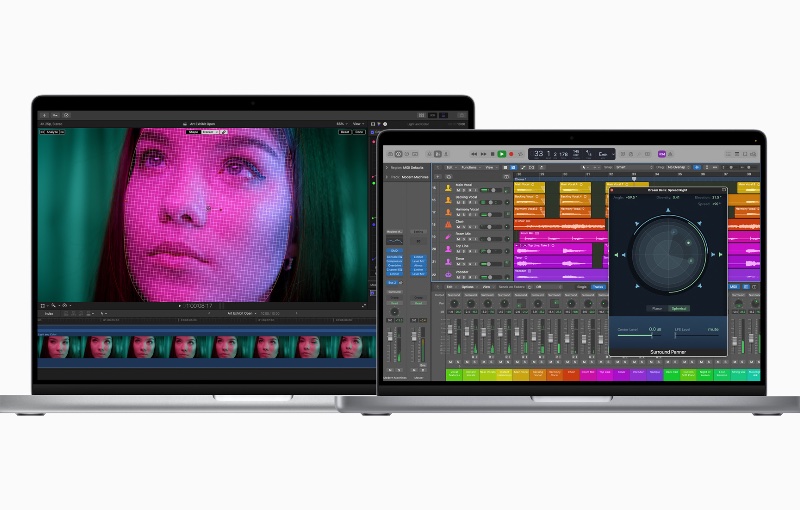 Along with new processors and MacBook Pro announcements from Tuesday morning, Apple also updated Final Cut Pro and Logic Pro with new features for creative professionals that take full advantage of the improvements of the new M1 Pro and M1 Max processors.

Enhancements to Final Cut Pro (10.6) will allow creative editors to take full advantage of the major performance gains enabled by M1 Pro and M1 Max in the all-new MacBook Pro. For example, they play seven streams of 8K ProRes at full resolution and export ProRes video over 5x faster than before. They can also colour grade 8K HDR video using the new Liquid Retina XDR display of the MacBook Pro.

Another new feature is Object Tracker. Users create animated graphics that follow the movement of faces and other objects in the frame. It uses the Apple Neural Engine to accelerate machine learning and perform up to 5x faster on the new 16-inch MacBook Pro.

Videos recorded in the new Cinematic Mode on the new iPhone 13 series of phones can be edited with Final Cut Pro and used to adjust things like depth of field and edit keyframes directly. Logic Pro (10.7) is Apple’s pro music creation software. It now comes with Producer Packs. This was first introduced in GarageBand and allows music creators to use beats, loops, and samples created by some of the biggest bands and musicians like Boys Noize, Mark Lettieri, Mark Ronson, Oak Felder, Soulection, Take A Daytrip, Tom Misch, and TRAKGIRL. Logic users now have access to 2,800 new loops, 50 new kits, and 120 new patches they can use in their own songs — all royalty-free.

There are also a complete set of tools for authoring spatial audio music — allowing anyone to mix and export their songs in Dolby Atmos for Apple Music. And musicians can use up to 3x as many plug-ins for recording on the all-new MacBook Pro with M1 Max.

Mac users can also sign up for a free trial of both as well. Education customers can purchase the Pro Apps Bundle for Education for US$199.99.

Join HWZ's Telegram channel here and catch all the latest tech news!
Our articles may contain affiliate links. If you buy through these links, we may earn a small commission.
Previous Story
Razer launches Seiren V2 Pro and V2 X USB microphones for streamers
Next Story
Netflix's first Cowboy Bebop teaser takes the crew on a campy bounty hunt