As expected, at its keynote that kickstarted this year’s Worldwide Developers Conference (WWDC), Apple gave us the first glimpse of the next version of OS X, which is officially christened as OS X 10.10 ‘Yosemite’.

Many have expected OS X 10.10 to get an iOS 7-type facelift, and indeed, that’s what happened. For example, the dock is now the flatter, frosty, translucent one similar to what we’ve on iOS 7; the iTunes icon is now red; the FaceTime icon is now green; the Safari icon is new (no prizes for guessing how all these new icons look like), the finder icon is redesigned, and the list goes on.

Obviously, there’s a lot of ‘translucent materials’ too, just like iOS 7, from the window titlebar and sidebar, to menubar and similar elements within apps. When windows overlay one another, you’ll also notice the slight translucency effect. There’s also a new dark mode that darkens many onscreen elements (e.g. menu bar, dock) so that it’s easier on the eye when you're in a dimmed environment.

Notification Center on OS X is also improved. Expectedly, there’s quite a bit of glass; as well as a Today view for calendars, reminders, weather, etc. - you know, just like iOS 7. This view can also be extended with 3rd-party apps and widgets from the Mac App Store (color us intrigued).

Spotlight is also massively improved both in terms of UI and functionality. In short, it resembles Alfred, a popular 3rd-party launcher, whereby you can type to launch an app or open a document. Other than local sources (e.g. your apps, documents, contacts, calendar, mail, messages), it also plugs into the Internet, so you can search Wikipedia, Bing, the various Apple app stores, and more. The results will even appear directly in the Spotlight dropdown menu. 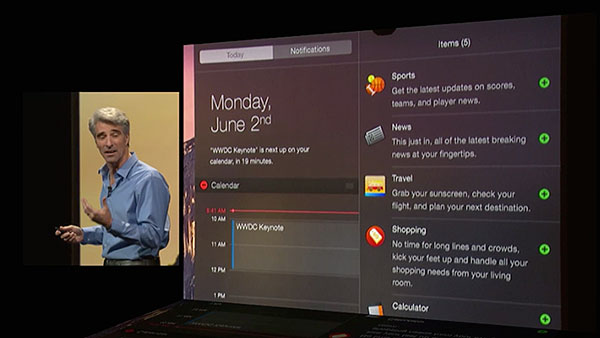 Apple is also tackling some of the common issues current OS X Mavericks and iOS 7 users face. For example, there’s something called iCloud Drive that lets you access all your cloud-based docs from within the Finder. Better yet, you can store all your files however you want on it, and they sync across all your Macs. And guess what? It supports Windows too!

Also new is MailDrop. Essentially, it allows you to send large attachments (stored securely in the cloud, of course) to recipients whose email can’t handle such large files, and would otherwise bounce the mail. 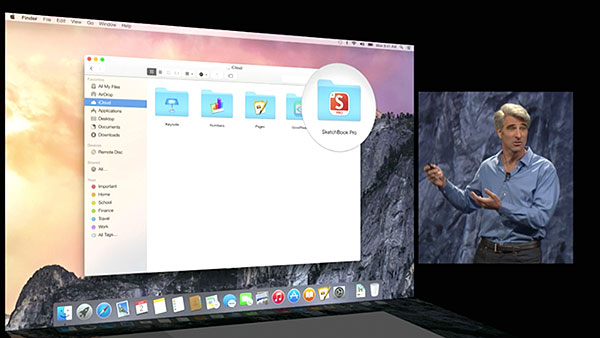 Safari is tweaked too. Apple has now gotten rid of most of the chrome, and you can now create a new private window. The Share menu is also improved, so it’s now easier to send stuff to your contacts. Safari relies on many web standards, and according to Apple, it comes out tops versus other modern browsers when it comes to multi-tab browsing energy efficiency, DOM (Document Object Model), and JavaScript performances.

Also music to our ears (and many others, we believe) is that AirDrop now works between iOS and Mac. Then there’s Handoff, which as the name implies, enables you to continue an activity you’ve started on one device on another. For example, you can write an email on your iPhone, and then finish it off on your Mac if it senses you’re near the computer.

Often, it’s the little things that matter, and there are plenty of such iOS-OS X tie-up niceties in Yosemite, which Apple calls ‘continuity’. For example, you can start a hotspot on your iPhone from your Mac; messages get relayed across devices (phone calls too!); you can accept calls on your Mac and use it as a speakerphone, even when the phone is in another room; and you can also dial from your Mac. OS X Yosemite is available as a preview for developers today. It will be released in the fall for - wait for it - free. Interestingly, Apple is also releasing a public beta in the summer.

Update: Apple has updated its website to feature OS X Yosemite, which you can head over to find out more.