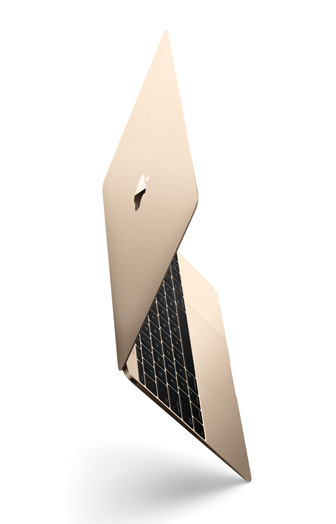 The MacBook line has finally got a much-needed update, and the first that will catch your attention is probably that it now comes in a choice of gold, silver and space grey. (Yes, much like the recently released iPhone 6 (And 6S) you can now choose the color of your MacBook.) The new MacBook is also a lot slimmer and lighter than anything Apple has released before at just 920g and 13.1mm thin, and it comes with a 2,304 x 1,440 pixels resolution Retina display that’s just 0.88mm thin, making it the thinnest display ever on a Mac.

Complementing the display perfectly is a brand new full-sized keyboard that is 34% thinner thanks to an Apple-designed butterfly mechanism that’s 40% thinner than traditional scissor mechanism yet four times more stable, providing greater precision. As before, the keyboard will be backlit, with every key individually backlit with its own LED for uniform brightness.

Also new, is the Force Touch trackpad that features built-in force sensors that allow you to click anywhere and receive haptic feedback for a uniform feel. You can customize the feel of the trackpad by adjusting the amount of pressure needed to register a click, and the force sensors allow for a new gesture called Force Click, which is essentially a click followed by a deeper press. Force Click can be assigned functions such as pulling up word definitions, previews of files, or quickly viewing a map.

The new MacBook also features a redesigned logic board that features no moving parts, vents or even a fan for cooling, allowing for silent, efficient performance. The MacBook will feature the new energy efficient fifth-generation Intel Core M processor that runs at just 5 watts and Intel HD Graphics 5300, and a terraced battery design that delivers up to 9 hours of wireless web browsing and up to 10 hours of iTunes movie playback.

What’s important to note is that the MacBook will feature a next-generation USB Type C port that supports higher-wattage charging, USB 3.1 Gen 1 (5Gbps) data transfer and DisplayPort 1.2 in a single connector that’s one-third the size of a traditional USB port. Add to this 802.11ac Wi-Fi and Bluetooth 4.0, and you have connectivity to all the resources you might need.

As is standard now, the MacBook will come with OS X Yosemite, iMovie, GarageBand, iPhoto,Pages, Numbers and Keynote.

Two base configurations are available:-

Join HWZ's Telegram channel here and catch all the latest tech news!
Our articles may contain affiliate links. If you buy through these links, we may earn a small commission.
Previous Story
Xiaomi Redmi 2 launch confirmed for 17th March
Next Story
Android 5.1 Lollipop arrives with HD calling and device protection for stolen phones