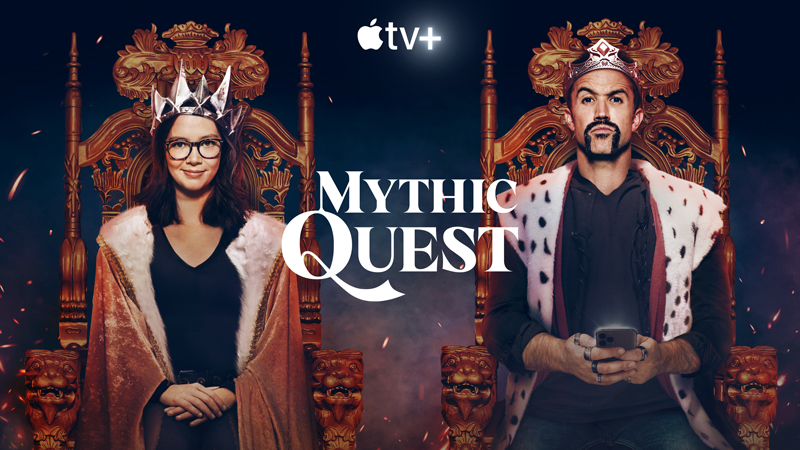 Mythic Quest, an oddly charming Apple TV+ series about a fake video game (it's really a Ubisoft game, though) and the studio behind it, will have a special episode released before the Season 2 premiere in May.

Beginning 16 April, Apple TV+'s subscribers can stream a standalone episode of the workplace comedy entitled, “Everlight”. Like many professionals, the creative team behind the Mythic Quest game are heading back to work following shut-downs and this half-hour special is highlighting that. It's a feel-good episode in light of the pandemic, but it's not the first time Mythic Quest did it.

After the pandemic shut things down last year, the series released a thoughtful bonus episode titled "Quarantine" that details the struggles of having to adjust to life in solitary - working from home, living apart from friends and family, and the mental toll it took for some. The show is now returning with what feels a bit like a sequel to that, an episode about the challenges and hope that come with returning to work.

“‘Everlight’ is a special episode that addresses the practical and emotional difficulties of returning to normalcy,” said series co-creator Rob McElhenney in the press release. “It’s full of hope and joy and optimism for a bright future. Ahead of our upcoming second season, we felt it was the perfect way (and the perfect time) to invite the audience back into the world of Mythic Quest.”

“Everlight” sees the team behind the multiplayer game reconvene at the office for their annual Everlight party, a LARP (Live Action Role-Play) tournament that Poppy (Charlotte Nicdao) and Ian (McElhenney) are rigging in an underdog’s favor. Along with the return of Mythic Quest‘s ensemble cast, the special episode will also feature guest star Sir Anthony Hopkins, who is lending his voice as the opening narration. Yes, that Sir Anthony Hopkins.

McElhenney also revealed that when Season 2 picks up, most COVID-related references will be minimal as the action takes place in a mostly-recovered world.

Join HWZ's Telegram channel here and catch all the latest tech news!
Our articles may contain affiliate links. If you buy through these links, we may earn a small commission.
Previous Story
PSA: That WhatsApp message of free Netflix isn’t really what you think it is!
Next Story
Google I/O developer conference is back in May as a virtual event