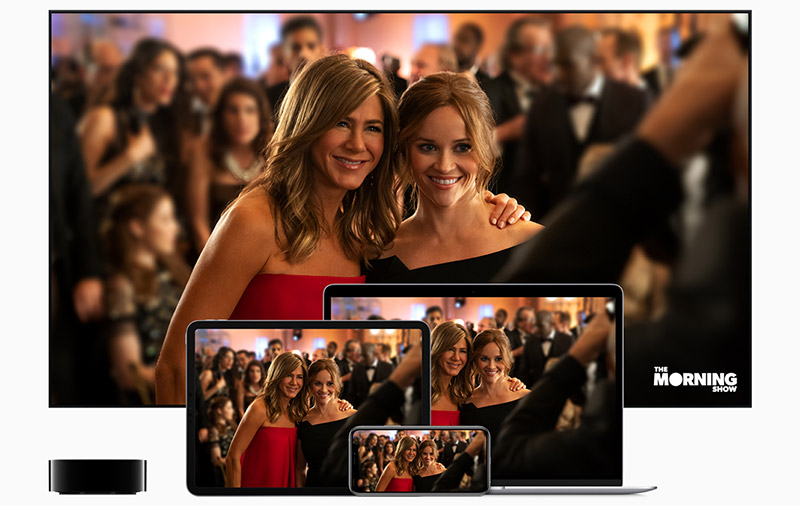 Apple has announced that its Apple TV+ streaming service will launch on November 1, 2019. It’s coming to Singapore, too, and is priced at S$6.98/month after a 7-day free trial.

Also, starting today, customers who purchase any iPhone, iPad, Apple TV, iPod touch or Mac will get 1 year of Apple TV+ for free.

Apple TV+ content can be accessed through the new Apple TV app that’s available on the iPhone, iPad, Apple TV, iPod touch, Mac and other platforms (like Samsung’s 2019 TVs). For those always in front of their computer, you can also watch the TV shows and movies through the browser (Safari, Chrome or Firefox) by going to tv.apple.com.

An Apple TV+ subscription can be used over a Family Sharing group, which means up to six family members can access the service. The aforementioned 1-year offer can only be redeemed once per family, so you can’t, say, buy four iPhone 11 Pros and hope to get four years of Apple TV+ for free. Additionally, Apple is only giving you three months after device activation to claim the offer.

At launch, Apple TV+ will feature originals such as "See" (trailer below), "The Morning Show", "Dickinson", "For All Mankind", "Helpsters", "Snoopy in Space", "Ghostwriter" and "The Elephant Queen." There's also book club content from Oprah Winfrey.

Apple says that most Apple TV+ series will premiere with three episodes, with one new episode to roll out each week, but whole seasons of some series will also drop at once.

Beyond the launch content, Apple promises to add new originals to the Apple TV app each month, and a couple I’m exciting about are "Servant", which is a new psychological thriller from M. Night Shyamala; and "The Banker", which stars Anthony Mackie and Samuel L. Jackson.

On a related note, Apple says that its Apple TV app will come to more devices — such as Amazon Fire TV and Roku and LG, Roku, Sony and Vizio’s smart TVs — “in the future.” For TVs that don’t have the app yet but support AirPlay 2, it’s possible to mirror Apple TV+ content from the Apple TV app on the iPhone, iPad, iPod touch or Mac directly to the big screen.

Join HWZ's Telegram channel here and catch all the latest tech news!
Our articles may contain affiliate links. If you buy through these links, we may earn a small commission.
Previous Story
Bank hands-free with OCBC
Next Story
Apple's new iPhone 11 comes with dual cameras and fun new colours