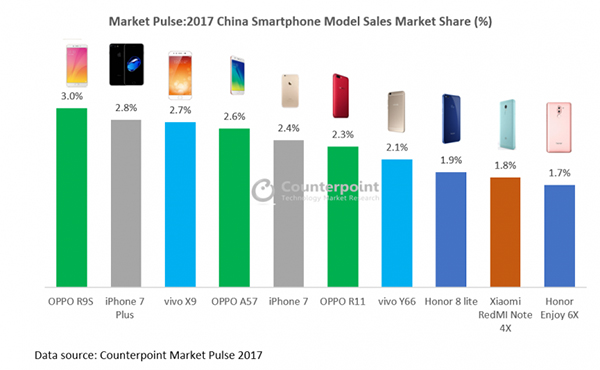 China is the world's largest smartphone market by a good margin. As I have said before, it is so big that a smartphone maker can become a global sales leader even if it doesn't sell well outside of China.

And if the latest numbers by industry analysis firm Counterpoint Research is to be believed, the Chinese smartphone market is also highly varied with the best-selling model garnering only a 3% share of the market.

According to Counterpoint, the top-selling model in 2017 in China is the Oppo R9s. It has a 3% share of the market.

Following closely in second place with a 2.8% share of the market is the Apple iPhone 7 Plus.

Apple has a second model on the list and that's the iPhone 7 which came in at 5th place with a market share of 2.4%.

Perhaps more interesting is the fact that Apple is the only foreign smartphone maker in the top 10 list.

Despite Samsung's global dominance, none of its models made it into the list of top-selling phones in China.

Also, despite being the number one smartphone brand in China, Huawei did not do so well in terms of sales of its individual models. Only its lower-priced Honor models made it to the list.