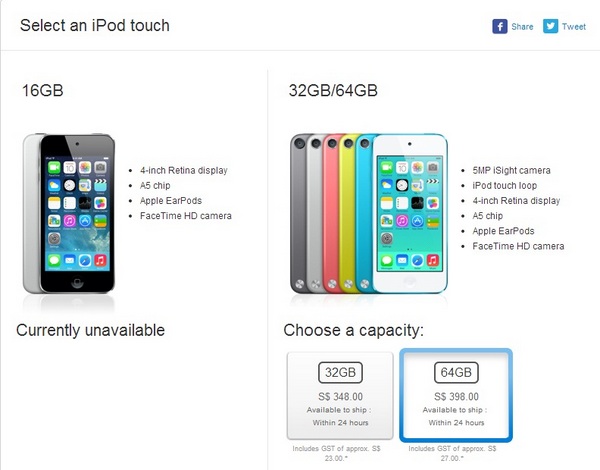 Apple updates its iPod Touch lineup and releases a new 16GB model. In line with the latest generation, this new variant will come with a 5 megapixel iSight camera that supports 1080p HD video recording and various color options. Previously, the 16GB model available resembles more of an iPhone 5 in space gray (there are no other choices for color) and does not have a rear camera.

The iPod Touch sports a 4-inch Retina display, comes with iOS 7 and runs on Apple's A5 chip. It features a light anodized aluminum exterior and you can choose from pink, yellow, blue, silver, space gray and (PRODUCT) RED. The current generation can be updated to iOS 8 when it is released later this year.

The new 16GB model is available in the US today for US$199 (Update: S$278 for Singapore), and will retail worldwide "in the coming days".

Join HWZ's Telegram channel here and catch all the latest tech news!
Our articles may contain affiliate links. If you buy through these links, we may earn a small commission.
Previous Story
Google: "We Are Still Invested in Nexus"
Next Story
Google Working With LG To Bring 3D-sensing Devices To Consumers Next Year