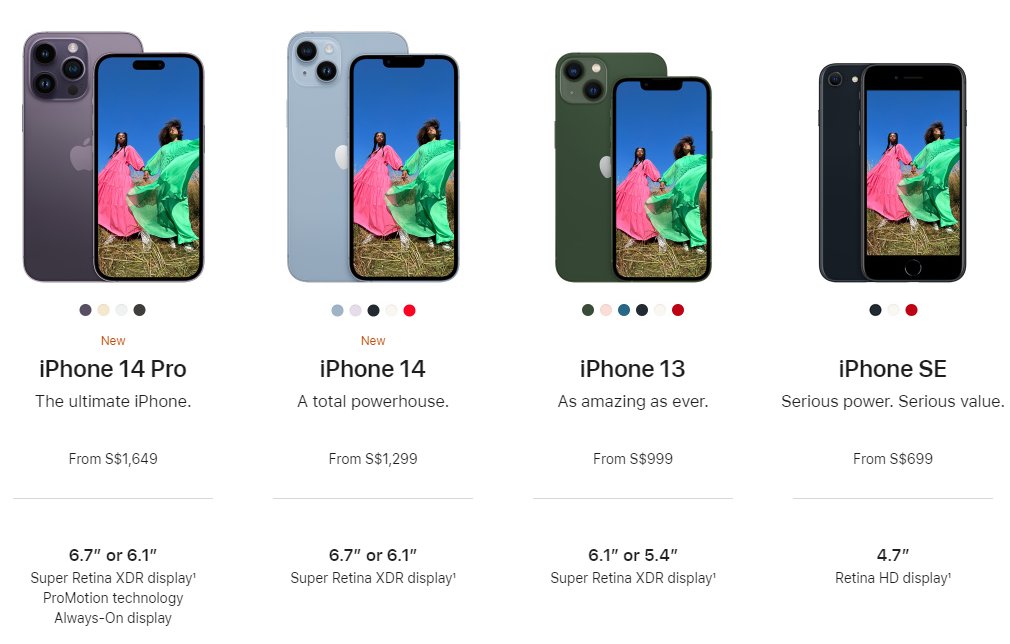 The new iPhone 14 launch has effectively upgraded the former non-Pro iPhone 13 to be equipped with some Pro-level capabilities such as its processor and camera capabilities from the iPhone 13 Pro. It sports the A15 Bionic processor with a five-core GPU instead of a quad-core GPU for smoother and more capable graphics performance, which goes well with the iPhone 14's brighter and more vibrant OLED displays. Dolby Vision HDR and HLG profiles also follow suit from the iPhone 13 series as can be expected. What's new on the iPhone 14 is better sensors to support Crash Detection and dial emergency services.

As for the camera, it's pretty much the same as the iPhone 13 Pro's 12MP main camera sensor, with an f/1.5 aperture and 1.9μm pixel size. However, the iPhone 14 does have Deep Fusion enhancements via upgraded software tweaks called the Photonic Engine. This allows it to capture twice as much low light on its cameras where Deep Fusion is applied much earlier in the photo capture pipeline stage, which helps it retain more data. This is how Apple manages to claim its 49% improvement in low-light capture against its preceding model.

These enhancements brought to the iPhone 14 have thus made the 13 Pro and 13 Pro Max models redundant as you're now getting some pro-grade features for less; the new iPhone 14 is priced exactly the same as the iPhone 13.

How much are the older available models discounted?

Should you even consider them?

Given that the iPhone 14 is priced identical to the iPhone 13's launch price, the repriced iPhone 13 is now about S$150 cheaper than the new iPhone 14 across all the storage size options. That's not a whole lot of savings, but the good news is that you aren't missing out much by considering the iPhone 13 over the iPhone 14. If savings is key, and it's time to upgrade, the iPhone 13 is still a safe choice.

What about considering an iPhone 12 if you're really on a budget? While it sounds good and is up to S$230 cheaper than an iPhone 14 at the same storage size, we would gladly recommend anyone to opt for the iPhone 13, and 14 models instead as there are simply too many tangible upgrades that the iPhone 13 brings to the table for the iPhone 12.

If you want the fanciest option and new capabilities, go all out to get an iPhone 14 Pro, which is the real spotlight for the 2022 iPhone launch event of the year.

Ready to make a purchase? Head over to Apple's Store.

Join HWZ's Telegram channel here and catch all the latest tech news!
Our articles may contain affiliate links. If you buy through these links, we may earn a small commission.
Previous Story
AppleCare+ for the iPhone and Apple Watch updated with unlimited repairs
Next Story
Bethesda has revived Wolfenstein: Enemy Territory with four dedicated servers